It was a sign of things to come. The restlessness, the thirst for change, the ever-growing heaviness. Ten years ago, Arctic Monkeys had been cemented as one of the torchbearers of rock music, ushering it into a new dimension where evolution was the order of the day. In Favourite Worst Nightmare, the growing pains that were so quaint and cute on their debut were abolished like the acne that had attacked Alex Turner. As Mani would say, “they came back with hairs around their knackers, man…they knew how to play.”

The pantheon of great artists usually has a number of checklists, and one of them – aside a usual Herculean intake of drugs, booze and Courtney Love – was that they saw it as their duty to mutate, explore and change. Like The Beatles and Radiohead before them, Arctic Monkeys weren’t going to stand still. The grass had barely grown under their feet following the release of their seminal Whatever People Say I Am, That’s What I’m Not, and already they were prepping their new record.

In truth, the songs off their debut had been around for a while, littering innumerable MySpace playlists and being polished to glistening perfection at endless Sheffield boltholes. After two singles, that both reached number one (almost unthinkable in this day and age), Turner and co capped off the year with the more spiky, unpredictable ‘Leave Before the Lights Come On’, but they weren’t going to let the next year lay fallow – Favourite Worst Nightmare would arrive well before the summer, with drummer Matt Helders promising something “more ambitious and heavier”. Crucially, though, was James Cook’s internship as a DJ, which helped fuel the pulsating rhythms that propel some of …Nightmare‘s most blistering moments.

The tracks off Favourite Worst Nightmare represent the rage and reflections of a night of unabashed hedonism, blending the torch ballads of fellow Sheffield songsmith Richard Hawley, the widescreen croon of Morrissey and the jagged jive of self-titled-era Blur. From the moment the urgent, twisting guitars of ‘Brianstorm’ arrived in a frenzied fashion, recalling Supergrass at their most ‘Richard III’, it was clear that the kitchen-sink charm of early Arctic Monkeys was long gone. 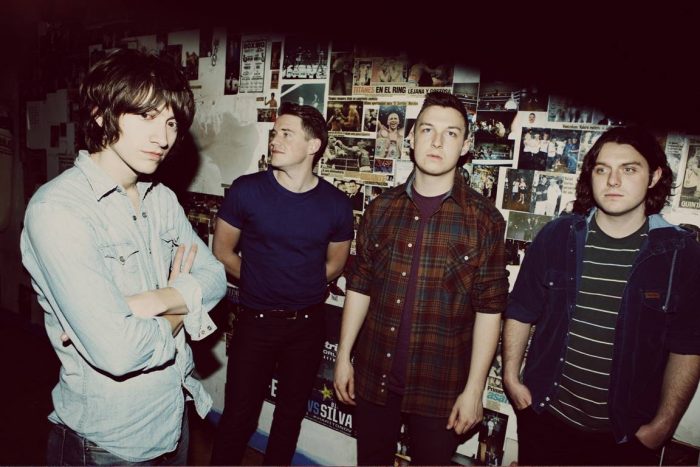 Throughout the record, the progression of Turner as both a singer and a lyricist was plain to see. Taking influence from Hawley, as well as other torch singers, his nimble voice became dark, brooding and lovelorn, not least in the album’s most arresting track, the stunning ‘505’. Trying to get back to his love in a hotel room, Turner sighs “I’m always just about to go and spoil the surprise.” This, alongside the dreamy soundscapes of ‘Only Ones Who Know’, gave Arctic Monkeys their first proper, beautifully bombastic love songs, which would rear their heads again in songs like ‘Piledriver Waltz’ and ‘Cornerstone’.

There was room, too, for Turner’s now-established acerbic wit, whether he be raging against the record label pricks on the taut, angular guitars of ‘Teddy Picker’ or the pounding introspection of ‘Do Me A Favour’, where Turner gave one of his many brilliantly expletive epithets in “perhaps fuck off might be too kind”. When he matches this with the uneasy creak of getting older, it’s even better – ‘Fluorescent Adolescent’, which gave burgeoning actor Richard Ayoade the chance to flex his directorial muscles, sees Turner list off a range of regrets and wistful requests (“you used to get in your fishnets, now you only get it in your night dress”, “clinging to not getting sentimental / said she wasn’t going but she went still…”). As the Marr-esque guitar arpeggios reach its breathtaking climax, where Turner laments “where did you go?”, millions of indie teenagers felt the crushing grasp of impending adulthood.

‘This House Is A Circus’ and ‘The Bad Thing’ would also hint at things to come, but like every other Arctic Monkeys album, Favourite Worst Nightmare stands proudly on its own terms. They’d change the game again with their next record, kicking up desert dust on the eerie Humbug, perhaps their least loved album, but by this point the rules of Turner’s game were in full force – change or perish.