God Speed You! Black Emperor, the band who know where to put an exclamation mark! have returned from the void. After several years, they suddenly re-emerged to play and host this year’s ATP and, tonight in Manchester, they play one of the shows added onto this jaunt.

The last decade of non action melt away as the band’s apocalyptic instrumentals fill the hall with a powerful voodoo and their very sound captures these dark times perfectly but with a euphoric hopeful edge that mirrors their political stance- offering solutions to the endless bombardment of questions.

The band came out of Montreal in 1994 and made an impact with their post rock workouts. Steeped in underground cool, they took their name from God Speed You! Black Emperor, a 1976 Japanese black-and-white documentary by director Mitsuo Yanagimachi, which follows the exploits of a Japanese biker gang, the Black Emperors.

Their releases at the time were key underground signposts as the band brokered their stark instrumentals that could last anything up to fifteen minutes building up the tension in their violin driven songs. It’s the intros of these songs that I really love- a bric a brac of sound gradually meshing together to explode towards the end when the drums kick in. A swirling, invigorating pool of sound that really does trip you and take you away.

It’s truly hypnotic and a place to get lost in.

They reformed this year for the recent ATP show and this Manchester gig is a part of their mini tour. The last missing decade is unnoticed as the band sell out the 2200 capacity venue and precede to fill it with their taut, tight sound. Grouped in a semi circle they play with the fluidity of people who have grown up together. All the time they are backdropped by a stunning film backdrop- with a series of urban images interspersed with fanzine style graphic art.Efrim Menuck has explained that these loops, which are commonly produced by violinist Sophie Trudeau, are an important aspect of their concerts, because they “put the whole into context”. It’s great to watch the projectionists grabbing at their spools of film and feeding them into the cameras at the back of the hall and the images they project onto the screen are great skrees of black and white, cut and paste art- like the classic fanzine art of cheap typewritten manifestos blown up into full screen. Their stark, monochromatic power perfectly matching the band’s dark magus power.

The films underline the bands political content where their vaguely acclaimed anarchism and squat politics are meshed into their music that is as political as the great Crass but without any words whatsoever. It’s all on feel and you can virtually touch that sense of freedom and longing in the darkly, melancholic songs that can surge into euphoria at any given time. 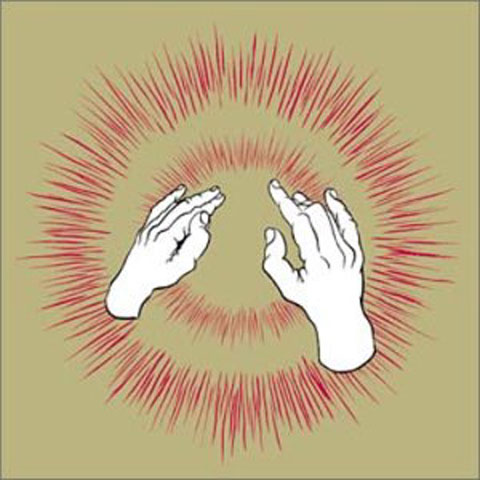