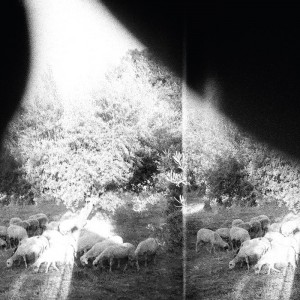 Godspeed You! Black Emperor – Asunder, Sweet And Other Distress (Constellation)

Already locked in for album of the year, this is a masterful work from a group that have already defined the word epic on their mysterious and powerful releases over the years.

This, their sixth album, is somehow, a giant leap forward from a band that have already defined that word epic and written the rule book on all the drone rock / post rock / experiMENTAL left field music in the current times with a series of landmark releases. The 40 minutes, 4 song work is the group at their most focussed, punchy and powerful and aligns their swirling brilliance with golden inclusive melodies and approachable dynamics.

The mysterious band whose influence and DNA is all over modern music and culture from brilliant fellow travellers like Mogwai’s spectral electricity to Clint Mansell’s brilliant soundtracks have taken their stunning soundscapes and somehow managed to create their best work yet – an epic take on their own epic.

Sound engineer Greg Norman from Steve Albini’s Electrical Audio space brings a hint of that distinctive clarity and crisp drum sound from the Albini-space and also the exquisite instrumental separation to the band’s huge whole that really works in their context.

Recorded at studios in North Carolina and Montréal in 2013 and 2014, this album plays to all the band’s already clearly defined strengths. As you slip away into this staggering album and drift away into the dark, yet resounding, distinctly different four pieces that make it up you are transported into a brilliant melancholia clashing with a perfect euphoria and a timeless vista of brilliant sound.

All at once Godspeed have made their most far out yet most approachable record. The strings and the instrumentation are still there weaving with the guitar, bass and drums but there seems to be a warmer, ahem, more rock approach to the work (maybe with a nod to the warmth of classic seventies recordings, the hooks that emerge from their rolling thunder, that already mentioned sense of inclusion in the tunes) to an album that also still works on a classical dynamic and it’s a dark, sombre and yet ultimately hopeful album that perfectly reflects these dark and dangerous times that we are navigating ourselves through.

The album still, somehow, packs the mysterious kind of political undertow that the band have remarkably always had without any lyrics or corny slogans. Somehow you feel their righteous power and oblique worldview without stating the obvious. Instead of slogans they create feelings, that unease and that hope is all rolled into songs of sombre beauty that ebb and flow like the stormy seas of the best classical music.

All great music thrives on mystery and stripped away of lyrics and personalities Godspeed get to tell a very different story from the usual trad rock structures and without distractions. This really is a music that stands up on its own terms and, whilst always captivating and always thrilling, somehow they have dredged up a whole new level of brilliance on this , the ir sixth and best album.

All you get are obtuse and early amusing titles and blurred record sleeves and lo fi captivating slides in their live shows and an ever glowing, large nine piece line up of semi visible faces and blurred personalities with hints of anarchist roots and squat politics and this expressive and emotive music.

One of great band names and taken their name from from a 1976 Japanese biker doc by director Mitsuo Yanagimachi, which followed the Japanese biker gang, the Black Emperors, the band formed in 1994 in Montreal the band struck out on their own path from the start with their combination of the power of rock, the adventure of post rock and the emotional skree of classical music somehow combined into their own distinctive whole.

They looked kinda like the Ex – that kind of big boots, army combat eclectic band as guerrilla unit, they played live in front of screens that displayed cut and paste zeroxed images and fuzzy hints at their reality that was blurred behind their swirling and epic music.

The follow up to the stunning collection of odds and sods that was Allelujah! Don’t Bend! Ascend! this is the band’s first proper statement of brand new music for years. It seems that the group, the collective, had laid low and were sliding into one of those endless voids that their music sometimes slips into. After six years of releases and touring the band the band had gone on an indefinite hiatus that went on longer than one of their hypnotic live drones before re-emerging when they recovered for a tour in 2010. The work is a direct result of that return from the long hiatus to begin playing live shows again with many of these pieces were worked out whilst they played thrashing out the ideas and the glowering dynamics to perfection.

The mystery and the enigma that is Godspeed You Black Emperor has thankfully not been enrolled by this stunning new album.

Some people worry about pointless things like how can one of the most distinctive and out there bands branch out from their sprawling definition of their own sound like this really matters. Godspeed operate at their own (God) speed and there are subtle shifts of focus and pace that make the new album perhaps the stand out work in their cannon. The usual stuff is there – from the evolving refrains and lugubrious rhythms, the ebbs and the flows the long builds and the stunning crescendos. There are drones, squelches of feedback and that combination of instrumentation that is their signature.

Somehow, like Swans did on their last album, they seem to have grappled with rock classic on this album but on their own terms. If Swans were working in that dark baroque of the Doors endless The End and making their own world out of it, Godspeed have found something motivating in the warmth and enveloping narcotic of melody and oozing power- it hints at a classic rock but that is only a sheen on top of their distinctive music and adds to the band’s power making them oddly accessible despite their own musical rulebook.
The opening “Peasantry or ‘Light! Inside of Light!’” swirls around a thrilling motif that sweeps like a football chorus- the closest this band will ever get to creating a terrace anthem! It’s a strong and thrilling motif that they toy with and then let it ebb and flow to a thrilling climax with the swirl of guitars, strings and maybe even a hint of underlying drone brass all adding to the hugeness of the song.

Track two, Lambs’ Breath, coaxes in on the splurge and tidal ebb and flow of the electricity of guitar drones and feedback as it seeks its own groove- even this glorious filth is hypnotic and holds a beautiful tension as the band have the confidence to hang their muse in mid air, holding out from the obvious. It’s companion piece is track three, Aunder Sweet, coaxing itself in on the same piece of humming feedback before tripping out on its own Syd Barrett period live Pink Floyd search for outer space mystery. Whilst the lengthy album ender, Piss Crowns Are Trebled, is a magnificent adventure into mystery and captivating sound and so hypnotic that its sudden end comes as a real shock.

You can see every left field band in the world reaching for this record. Godspeed are the benchmark in the beyond. Music of this sheer nerve and daring is a gift and works way beyond any stipulations. What we love about them is that, somehow they still operate in a weird punk rock post hardcore space – the ideals of experimentation and creativity that are beyond such boring things like rules and regulations.

The atmospheres they create reflect these times so perfectly that they don’t even need a film to soundtrack. This is a film music that exists on its own – a dark and dangerous and thrilling trip into the unknown that, when you close your eyes, creates a whole world that mirrors this one with its glorious and adventurous noise that is dripping with atmosphere and melody,