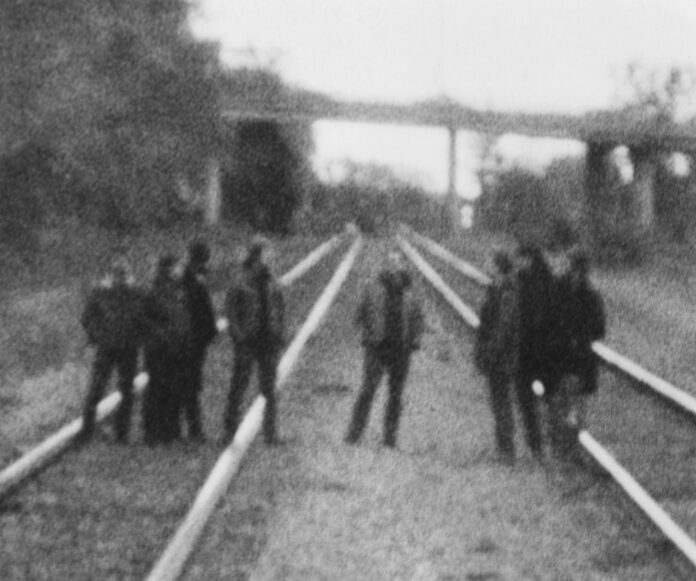 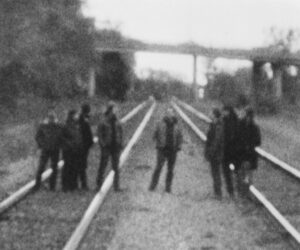 As soon as the “ATP at the Roundhouse” series of gigs was announced it was clear that a stand out highlight was going to be the date headlined by Canadian post-rock giants Godspeed You! Black Emperor. And so it came to pass. Here, Simon Tucker reports back from a show which was not only aurally stunning but visually so too.

Let’s get the disappointing bit out of the way first. Due to being caught up in France’s strike action, Beak> were unable to make their allotted time slot and had to pull out of the gig. A huge shame as I, and many others at the gig judging by the amount of Invada Records t-shirts scattered throughout the crowd, were very much looking forward to seeing the trio and hearing their new material live. Hopefully we won’t have to wait long to see this incredible band live again.

In their place stepped London based sound-artist Helm. Helm’s set was an intriguing and dark listen with soundscapes and sampled chatter winding its way through the heavy Roundhouse sound system. A decent 30-40 minute set, Helm is worth checking out as I get the feeling that his recordings would connect more on a home system than on the large stage.

The crowd started to grow visibly larger as we approached 9pm in anticipation for the headline act and by the time they quietly took to the stage you sensed here was a crowd eager to see this most influential of bands.

Lights dipped, band on stage, we were sent spiraling into the world of Hope Drone, a confident and edgy opener that submerged this classic building into a universe that was equally terrifying as it was beautiful. Scratched out visuals (more of which later) kept showing us the word ‘Hope’ using one word to start a psychological and emotional journey which all that were in attendance were happy to go on.

Then the drums started. Kick, snap, crash, marching at a hypnotic pace punching us in the stomach setting our bodies to Godspeed’s clock. We have landed in Peasantry or ‘Light! Inside of Light’ the opening song on the band’s recent masterpiece, Asunder, Sweet and Other Distress (our review of which can be found here) and it is a landing that crunches and soars. Banks of sound throw us around with the beautiful melodies of violin streaking over the top in bursts of scathing light. There is beauty to behold, and there is indeed hope but to find hope you must first step into the shadows.

The hushed crowd were drawn in, some closed their eyes, some stared at the stage with a look that was a mix of wonderment and glee. We are witnessing artists at the peak of their powers, a collective full of understanding and intuition, reading each others thoughts and feelings with looks, gestures, and pure human connection. Not a word is uttered from the stage to the audience and why should there be? We’re not here for singalong, for acknowledgment, or for a cheap “hello London”, we are here to bathe in the dark / shade contrast that screams at us from the stage and boy doesn’t it scream. This gig was LOUD and after recently reviewing Swans in the same venue I can safely say that GY!BE were louder but not for one moment does it become uncomfortable as the distortion squalls are balanced by the gut-shaking drums and the fluttering lines of strings. This is classical music in all but name and as with great classical pieces the music falls into a strong linear narrative that speaks of Kafka and Ballard, of secret Cold War files, and medicated lives. Of despair and joy. Old Testament fury mixed with future dystopia.

All of which was emphasized by some of the finest visuals this writer has seen at a concert. Instead of the usual laser show and bright light histrionics that many lesser bands use to distract you from the fact that the band ain’t that great, we were treated to a man live mixing four projectors using reams of 36mm film. Warping the film, speeding up and slowing down, and even burning through the negatives at points, this was a display of pure art-house cinema which echoed through the ages. Images of depleted buildings, case files, engineering plans, and of rippling tides helped focus our minds on what the audio was conveying. The visuals were that good I honestly think I only looked at what the band were doing on two occasions. The sepia tinged colorization was like flicking through a classic novel that had been read by generations. Maybe there were secrets inside that needed telling.

The band weaved through a goosebump inducing version of Piss Crowns Are Trebled and cuts from their previous album Allelujah! Don’t Bend! Ascend! which make this tour not just a victory lap resting on past laurels but a signpost that the band are back, serious, and ready to keep marching onwards.

Orchestral, prophetic, historic, bone-shaking, tear-inducing, thought provoking, tonight’s gig was where I witnessed one of the finest live spectacles that I have ever experienced.

A triumph of sound and vision.

You can find Godspeed You! Black Emperor online here: brainwashed.com/godspeed. They’re also on Facebook and tweet as @gybe_.