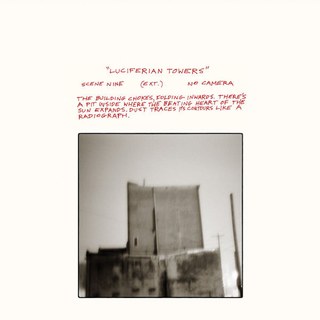 Before you even get to the music you are presented with the ideology behind Luciferian Towers courtesy of text attached to the press release which states;

“An end to foreign invasions. An end to borders. The total dismantling of the prison-industrial complex. Healthcare, housing, food and water acknowledged as an inalienable human right. The expert fuckers who broke this world never get to speak again.”

Reading this and the detailed breakdown of each song that is also provided you would expect this to be GY!BE’s most visceral and aggressive album to date. This, however, is not the case as Luciferian Towers is restrained, melodic, beautiful, and highly emotive. Those who yearn for the earlier style of GY!BE releases will have to wait for longer as this album continues in much the same was as their most recent albums, ‘Allelujah! Don’t Bend! Ascend! (2012) and the slightly underwhelming Asunder, Sweet and Other Distress (2015).

Luciferian Towers still manages to sound grand in scope and while the ragged edges have been smoothed there is still plenty of grandiose power and epic swells of sound that light the album up and swallow your mind whether that be on the jog-to-sprint finish of Bosses Hang Part II, which in turn bleeds straight into Bosses Hang Part III or the wonderful opener Undoing A Luciferian Towers which manages to sound in one instance like a form of roots music before flipping into the sound of a not-so-distance dystopian future.

Musically, Luciferian Towers is a definite improvement on its predecessor Asunder, Sweet and Other Distress however thematically it does fall short as when broken down into its relevant sections the whole album is only four songs. Now this wouldn’t be an issue normally but when the band have decided to break each one down (title wise) on the album e.g. Bosses Hang Part I, Part II, Part III etc it gives the impression that there are distinct sections but when listened to as a whole there is not. It is just one song that morphs and evolves like many other long-running songs in the genre so why not just call it as it is?

Listened to as a whole piece, Luciferian Towers contains enough drama and high tension to stand up to repeated listens. The bands playing is at once fierce yet subtle and there is no doubt that this will be extraordinary to witness live on the bands forthcoming tour. It may not be an instant favourite for those fans wishing for a return to the more original GY!BE sound but it is certainly one that will grow in stature. Concise, pointed and full of sweeping melancholy, Luiferian Towers is an album that doesn’t hide its anger or its empathy and serves as a welcome return to form.

You can find Godspeed You! Black Emperor online here: brainwashed.com/godspeed. They’re also on Facebook and tweet as @gybe_.