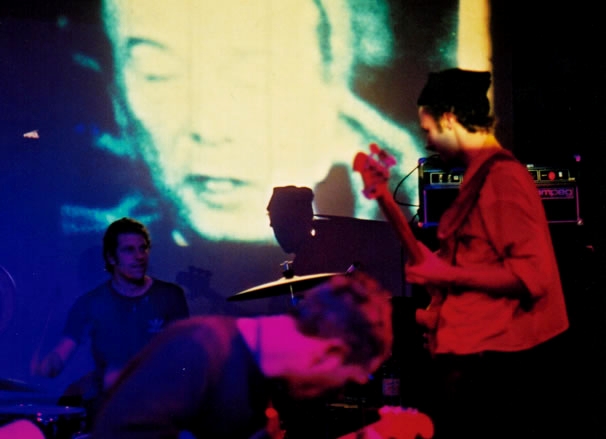 This year Simple Things Festival have really pulled it out the bag. Even though this concert was stand alone, in terms of having to pay separately to the Festival ticket, it marked the opening of what would be one of the best weekends of the year in my eyes. I have appreciated Godspeed You! Black Emperor since they began their unique musical journey back in 1997 when they released their first album, ‘F♯ A♯ ∞’. The mysterious nature of the band has always been a draw. In 2003, they announced they were taking an indefinite hiatus to concentrate on other projects, reconvening in 2010 to produce their forth album, ‘Allelujah! Don’t Bend! Ascend!’. And in March of 2015 released their newest recording, ‘Asunder, Sweet and Other Distress’.

I must say I am struggling to put into words what I experienced, but I will try my best.

The 9 musicians that take up the massive stage leave very little room, equipment and instruments, from the technical to the most traditional lie waiting to be brought to life. As each member arrives on stage, sound arises. First a violin, then a double bass. Building the foundation with abstract melody until all members are present, adding to the drone and music that is forming. Like their albums, no voices, just instrument vibration, fractally breaking out into melodious cul-de-sacs.

The 2 hour set is quite something. It moves in and out, breathing, living. Growing in noise and discordant drama until it forms a peak, a relief that breaks free from it’s body to become something almost spiritual. When these truly beautiful moments develop, a wave of elation comes flooding forth. The freeness in which the band build their songs is breathtaking. Coupled with dual-screen black and white projections that forms the backdrop, it’s an immersive place. Their place. They transport the listener/watcher to a place where the music makes perfect sense.

The only band that come close to what Godspeed do is Mogwai. They both create textures rather than tones. Feelings rather than reactions. When they make music, it’s like filling a glass with water and depending on your perspective, the glass could be half empty or half full. When you thought they had reached the lip of the glass, the water cascades over the sides, flowing freely until they catch themselves and pull back. Somehow happy in the knowledge that they pushed the boundaries, doing it ‘their’ way, the only way they know how.

More info on Godspeed You! Black Emperor can be found at: cstrecords.com and on their official website: www.brainwashed.com