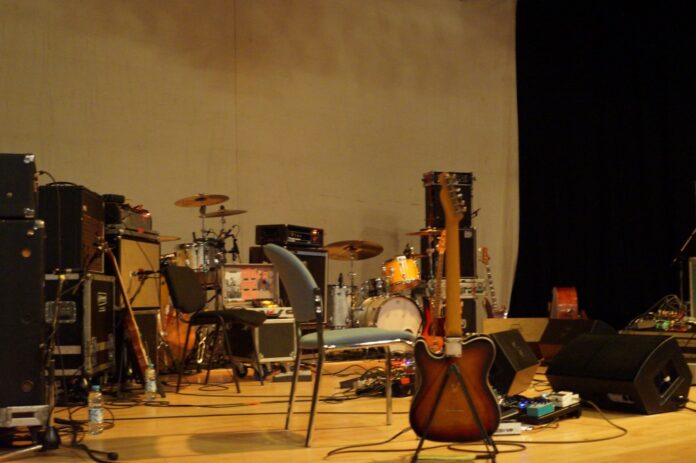 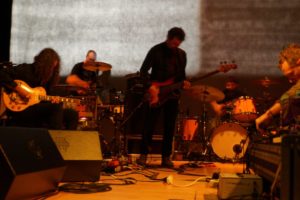 Rick Leach reviews the staggeringly good Godspeed You! Black Emperor at Liverpool’s Camp & Furnace. Martin Ward took the photographs at their Warwick Arts Centre show on the 22nd October and was similarly impressed.

As Hot Chocolate didn’t say (but possibly should have) it started with a drone.

Maybe longer. It could have lasted for an hour. It was difficult to tell. Time was either standing still or moving very quickly indeed.

I wasn’t sure exactly how long I’d been standing there, with the undulating sound of a cello and violin getting louder and louder. What had begun as a quiet, almost indiscernible and gentle bowing, akin to a classical orchestra tuning up had, without me really noticing a change, turned into something that was so loud that it was painful.

But then it stopped.

Past the point when you couldn’t endure it anymore; that moment had been passed as long time ago.

But it did stop.

And I missed it.

It seemed strange not having that drone around anymore.

This was Godspeed You! Black Emperor at their first ever Liverpool show for Liverpool Music Week.

Not a bunch of loveable moptops I guessed. But you never know.

Maybe they were going to break out into a rendition of “She Loves You”. That would have been unexpected.

It was difficult to know where one track started and another ended. One merged into another, folding over and over, falling over themselves, like some sort of geological structure being laid down. Stratas of sound. Not sheets of sound in a Coltrane way, but thin layers, thousands of layers of notes being constantly piled on top of each other.

GY!BE always make me think of nature. But not the nature of the Canadian plains or forests or mountains or snow, but of the sea.

The sound of crashing storms.

The sound of darkened skies.

The sound of lightning.

But then, in the end, they are the sound of ripples, tiny ripples in a rock pool on the edge of deserted beach. Not waves, but ripples so small that you wouldn’t ever notice.

I think that they’d played two or three tracks in the first hour. As I say, it was hard to tell. Just at the point I thought it couldn’t possibly get any louder, then it did. So loud that the aged walls of the building, those old warehouse bricks from a century ago, simply couldn’t absorb any more sound. They were doing their best to soak it all up, yet they’d had enough. There was no more space for any more sound. We were left to take it all in.

Yet it wasn’t simply noise. That would be giving wholly the wrong impression. Those drones, that intense (beyond intense) loudness, those layers of sound, were all underpinned by melody. Not a melody that you’d whistle when you were cleaning the windows, but a melody nevertheless. I suppose you could call it pop music if you were so inclined, but that’d be stretching it a bit too far. Melodic music.

There should have been an intermission in the over two hour set. There was just too much to take in, but GY!BE were relentless, hammering away from one track to another, not letting up for a minute. Apart from The Fall in the early 1980’s, I have never experienced any band play with such detailed concentration. There were none of the usual tired rock clichés; no interaction between the nine people on stage. There didn’t need to be. They all knew exactly what each of them had to do to make that glorious sound. There didn’t need to be any of that silly posing, of nodding between each other, of knowingness. They just got on with it.

Best of all and a welcome relief for me, was the absence of any microphone stands. No need for any of that daft chatter with the audience. This wasn’t the 1960’s. Why on earth would they need to talk (down) to us? It just needed to be the music and the sound and the music and the sound. That’s what we were all there for and that’s all that matters in the end.

Every so often, like in a storm, there was a brief respite, a slight lull. It did go quiet. Not silent, just quiet. In those seconds, those moments, you could sense a collective breathing out, a sigh of relief, a sigh of release. Then we all took a deep breath as it started again, every track becoming more and more intense and complicated and louder. Still.

Just over two hours after that drone began and built up and up and heavenwards into an impossible crescendo, it was all over. The end of the storm. Everybody drifted out into a drizzly, warm October night, amazed and staggered at what we’d just seen and heard. This had been something truly special, something possibly never to be repeated.

Or the sound of…

More info on Godspeed, You Black Emperor can be found at: cstrecords.com and on their official website: www.brainwashed.com