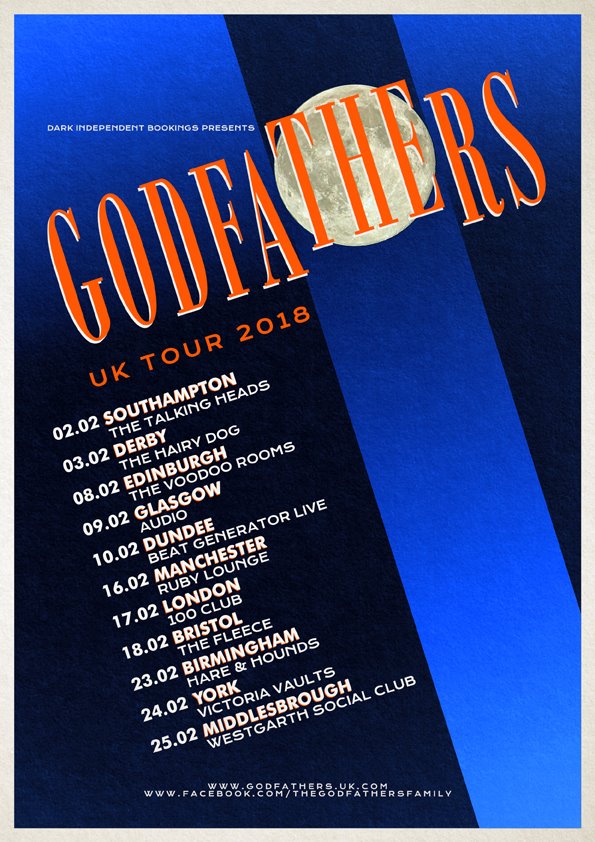 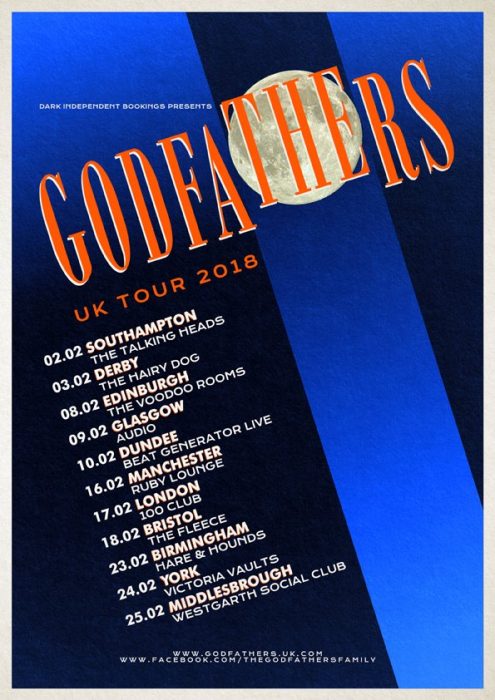 The Godfathers: the Talking Heads, Southampton – Touring the UK throughout Feb…

First date of the UK tour and the Godfathers are firing on all cylinders… still a majestic rock’n’roll band like no other.

They never let us down.  I’ve written about the Godfathers before. It’s gotta be done because they are criminally ignored by the mainstream music media,

They have a maleness and toughness that isn’t very fashionable.  It’s only very occasionally they roll-over  like a kitten and you see their soft, fluffy underbelly.

Commitment, Consistency and Great British Rock’n’Roll.  That’s what you get from the Godfathers. And confidence in themselves.  Only Peter Coyne could get away with posting on facebook the following morning, talking about his own gang in the third-person: The Godfathers were FUCKING GREAT in Southampton last night!  Simply stating the facts rather than blowing his own trumpet. He is the frontman, the gate-keeper, but the Godfathers is about the  individual musicians united and sticking to a cast-in-steel template and both an aesthetic and an ascetic .  (increase your word-power, look ’em up).

I only wrote about the Godfathers less than three months ago here, but quality writing, like their quality musicianship bears repeating.

They play hit after hit, interspersed with tracks from the Big, Bad, Beautiful new album and you can’t see the join.  As always they can play rockabilly – ‘Walking Talking Johnny Cash Blues, psych – ‘When Am I Coming Down’ and punk rock – a storming ‘Blitzkreig Bop’ to close- and all with their own inimitable stamp of authenticity. ‘Love Is Dead, I Want Everything, I Want You, I’m Unsatisfied’ were storming and rapturously received.  Newer live favourite ‘Defibrillator’ matched ’em punch for punch.  Basically it was a faultless set.  They are older of course, but musically as sharp and tuneful as ever. They carry on the Great British tradition of  writing no-nonsense rock’n’roll songs about love and hate with a veneer of menace hiding the romance and a tough shell covering the vulnerability.  For every I’m Unsatisfied there is an I Want You.  The Godfathers are lovers as well as fighters.

At the Talking Heads they played a full action-packed, sweat-soaked ninety minutes. Pissed off with the poor turnout (compared to European gigs) an inappropriate and impolite support act, they were absolutely on fire and turned the night around.  There was dancefloor action and a lot of smiling faces in the audience.  (I attempted a bit of dancing but would’ve needed a fuckin’ defibrillator if I’d done any more  … how does that blonde duracell-bunny-girl keep moving all-night! )

Peter Coyne’s onstage banter was  sharp and viciously funny. Steve Crittalls guitar heroics and shape-throwing were a joy to watch. Tim James is a rock-hard drummer, up there with Paul Cook. Darren Birch back to match-fitness after a stretch ‘lying in a hospital bed’ a perennially cool bass-player.    Token Youngster Alex McBain plays some needle-sharp lead guitar.

A team, a gang, at their best. As Peter Coyne quite rightly said. The Godfathers were fucking great in Southampton last night. A Big, Bad Beautiful Gig.

Don’t miss ’em on this tour…