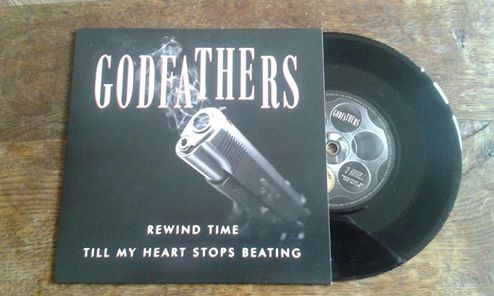 The Godfathers – Rewind Time | Till My Heart Stops Beating

As promised at their Valentines Day Massacre gig in February, and in my interview that evening, The Godfathers celebrate their 30th anniversary with a double A side single of two stonking new songs, available now. Previewed live that night, the new songs are a must for any Godfathers fans yearning for quality tunes worthy of their back catalogue and their excellent current line-up.

‘Rewind Time’ sees bassist Chris Coyne take the lead vocal on a song with a classic brooding style, complete with John Barry tinged intro. If you heard this on the radio, you’d immediately know it’s The Godfathers. It’s that good. The twin guitar assault of Mauro Venegas and Steve Crittall gives the song the momentum it needs, especially towards the climax of its’ all too brief 2.35. And on 7″ vinyl, you’ve got the joy of letting the needle hit the groove again.

‘Till My Heart Stops Beating’, with Peter Coyne back on lead vocals, while uptempo and complete with handclaps, initially sounds like a love song. And it is; to the lure of the road and his commitment to the band; “I won’t give up till my heart stops beating”. Tim James’ metronomic drumming drives the song along to a tune that reminds me of The Jesus And Mary Chain, albeit with less feedback. Quality stuff.

As if this wasn’t enough, it all coincides with the band’s 30th anniversary tour;

Don’t say I didn’t tell you. Be there.

All words by Martin Haslam, whose Louder Than War author’s archive is here.