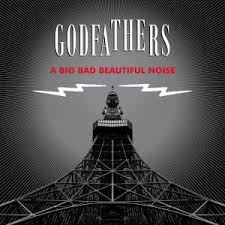 Brand new album by premier London Rhythm and Punk hoods the Godfathers, their first set of new songs since the acclaimed “Jukebox Fury”….LTW’s Ian Canty take a walk down the wild(ish) side, first calling in on Memory Lane and then coming right up to date with this brand new musical biscuit…….

It was over thirty years ago now, but I can still remember it clearly because that night was indelibly seared into my memory by the strength of the experience I encountered. In a grotty little club that was once the floating bridge connecting Woolston to “Town” as it was called then, but it meant the other side of the water from the city of Southampton. The “Riverside”, as it was known, was dark, dingy and full of unsavoury types, which I suppose marked it out as a highly conducive setting for the business of dirty and exciting Rock ‘n’ Roll in the 1980s (which was about to make its first steps back to the limelight in the face of the very clean, antiseptic “New Pop” that was still hanging on for grim death back in 1986). I was there to see a band who I had read about in the music press and seemed pretty interesting, but I was not prepared for the kind of intense experience that the Godfathers provided that night.

It is not easy to put into words exactly what I saw that night….though of course it was very exciting music and a stage presence that most band would kill for, sure, but there was something else….they made it look so bloody easy…like the combined strengths of the Pistols and Dr Feelgood put together (who I would hazard a guess loomed large in their thinking at the time). It was like they were born for just this moment, totally committed to supplying compelling, thrilling, noisy music just when most thought it had died out forever. I particularly remember guitarist Kris Dollimore larking his way through their brilliant second single “This Damn Nation” but not missing a step, note perfect, throwing the guitar about. Without doubt one of the best gigs I ever went to, which also I used as a yardstick to judge pretenders by as the years went on.

Well that is the past safely despatched, what of this then, “A Big Bad Beautiful Noise”, a long time from their nascent days at the Riverside and the Godfathers first LP since 2013? Well the title succinctly sums up their sonic approach for a starter and also this set does hang together like a proper album of the kind we saw “in the old days” rather than just a disparate collection of songs. Although there is no actual “theme” as such what runs through the songs is a determination to use desperation as the alarm signal to kick back, an urge not to be beaten despite what hurdles life throws up for you like rejection, hate and the loss of a love. With of course it all being set to a rollicking soundtrack as only the Godfathers know how.

Only singer Peter Coyne remains now from that early line-up, but the band’s mission remains intact and audio-wise at any rate they are still the same, lean and mean. If you are expecting a big change in sound from those early days you are going to be disappointed but if you wish for a dynamic ride of thrilling Rock and Roll you certainly are not going to be. Streamlined and sleek, the Godfathers see in 2017 now as elder statesmen of the art of brutal Punk R’n’B noise and sounding more vital than many folk half their collective ages.

The fuzzed up title track gets things going, with treated vocals giving a strange sort of Fall-like quality – underneath this track’s eccentricity the band sound superb. Throughout the LP as a whole the multi-tracking of the guitars adds greatly to the power and the drum sound is thunderous. The producers do a great job in capturing the band’s prowess and presenting their clear, power-packed sound for all to see or more pertinently, hear. Though perhaps representing a slight change of tack for the Godfathers, the jangle-pop of “You Don’t Love Me” (with this LP’s single), is another classic slice of surly magic, full of regret maybe but possessing a “don’t mess with me” attitude into the bargain. The “heads down” relentless throb of “Defibrillator” even recalls “Hup Two, Three, Four” by predecessors’ the Sid Presley Experience, that’s the thing with this record – it will remind you of everything you liked about the Godfathers in the first place but has been updated in a vibrant way for 2017.

Though the game the Godfathers play goes right back to the early stirrings of Rock in 50s, (stopping off wild 60s Beat and Garage Parkway and 70s Punk Temple Meads along the way) they manage to wring some new wrinkles out of the old format and whilst it always “sounds like the Godfathers” it doesn’t appear hackneyed at all. It is just what they do. If “Feedbacking” purloins the riff and drive of Iggy Pop’s “Cold Metal”, it doesn’t really matter as the Godfathers never really set themselves up as innovators, just true believers in spot on, high quality and dangerous Rock ‘N’ Roll. Which they deliver here time and time again and even manage to finish off with the kind of “lump in the throat, damp eyed” anthem that Oasis would have sold their grandmothers and any other elderly relatives at hand for in “You And Me Against The World”.