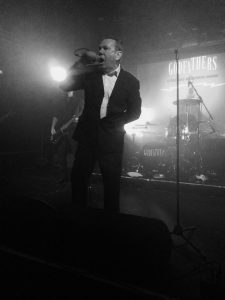 Former Basins promoter and local legend Chris Abbott comes out of retirement to present some classic punk rock’n’roll in the city.  Peter Coyne’s mob do the business. Ged Babey learns not to mess with Godfathers.

This was bloody marvellous.  The Godfathers may well be ‘the Peter Coyne Experience’ in that he’s the only original member left standing -but the band do the songs, the legacy and the name justice. It’s called rock’n’roll – and the Godfathers do it hard, do it clean and do it mean.

This was an old-school night. Put together by local legend (promoter, manager, enthusiast and raconteur) Chris Abbott, out of retirement and on a mission to get Pompey rockin’ again. The Flaming Stars were great here back in the summer and its the turn of Oh! Gunquit, The Mirage Men and Archive 45 next (not til 20th Jan 2018.)

Local reformed punks from the early 80’s Acid Attack provided able support and went down well with their loyal fanbase. On a big stage and loud PA they sounded like a juggernault of tribal drumming, rumbling bass and wall of sound guitar.  The singer was in his element, stalking the stage as he raged.   Acid Attack were somehow different to many of the 1982 era 3rd generation bands, down to the drumming and time changes -they didn’t fit neatly into any sub-genre (anarcho, hardcore, streetpunk) and their doom-laden protest and anger sound surprisingly fresh and vital all these years on.

Pete Coyne was outside having a fag, regretting the earlier Chinese he’d had.  I said hello.  He remembered me from an online disagreement a year back, which I had forgotten.  He fixed me with that Paddington Bear with knuckledusters stare of his;  the same as the one he surveys the audience with from the stage.  He lives up to his ‘corporate’ image of being a no-bullshit, not-so-passive/potentially aggressive bloke initially.

Later, when he was onstage I heckled him with a “Give us one of yer famous smiles Peter!”

“There’s no need to smile, when you’ve got style!” came his razor-sharp retort.

He did crack a smile for photos later outside and almost revealed his softer-centre, but not quite.

“First time we saw you was in Reading in 1988″ said a passing fan to PC.  ” You was great.  We all started dressing a bit sharper after that, suits’n’that”

Coyne gave him a firm handshake and looked genuinely pleased about that; the fact he made a bit of a difference, no matter how small.

Onstage at the Wedge, the sound is loud and clear. The Godfathers are bathed in red and white light and sound immense.  They play hit after hit, interspersed with tracks from the Big, Bad, Beautiful … new album and you can’t see the join.  As always they can play rockabilly – ‘Walking Talking Johnny Cash Blues, psych – ‘When Am I Coming Down’ and punk rock – a storming ‘Blitzkreig Bop’ to close- and all with their own inimitable stamp of authenticity.

‘Love Is Dead, I Want Everything, I Want You, I’m Unsatisfied’ were storming and rapturously received.  Newer live favourite ‘Defibrillator’ matched ’em punch for punch.  Even the countryish ballad ‘She’s Mine’ gets a roar of approval.   Basically it was a faultless set.

They are older of course, but musically as sharp and tuneful as ever. They carry on the Great British tradition of  writing no-nonsense rock’n’roll songs about love and hate with a veneer of menace hiding the romance and a tough shell covering the vulnerability.  For every I’m Unsatisfied there is an I Want You.  The Godfathers are lovers as well as fighters.  A great band, still.