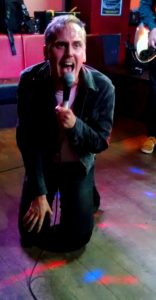 Christopher Lloyd reviews the Swedish titans bringing some physical flexibility to the sound of the apocalypse.

Formed in 2012, God Mother are a Swedish thrash-punk-metal juggernaut that fully came into their own the following year when they appointed vocalist Sebastian Campbell to take over from the drummer’s vocal duties.

After releasing their debut album ‘Maktbehov’, God Mother toured with Dillinger Escape Plan, making such an impression that the band signed them to their ‘Party Smasher Inc.’ label in order to release their follow up album ‘Vilseledd’.

This is the first UK tour God Mother has embarked upon, and as they take to Birmingham’s Subside bar it becomes apparent that they intend taking no prisoners. With a setlist drawing from both albums and primarily lyrically Swedish, the topics could have been about anything whatsoever, but they come across with such power that your soul just knows that there is some serious lyrical weight behind them.

The three musicians ferociously spew out an amalgamation of grinding thrash and math-rock through a kind of ‘Motorhead’ filter which is every bit as flexible as the dance moves of front man Sebastian Campbell, who spends most of the set on the dance floor, moving the crowd into sections like a Swedish sheep-dog.

When any other band with such a heavy apocalyptic sound as God Mother decide to physically split a crowd into two facing sides, you can rest assured a wall of death slam fest is about to hit. Not tonight though, “Have any of you guys watched Soul Train” asks a beaming Sebastian to a predominantly young metal crowd who clearly haven’t, before taking hold of a young brummie, resplendent in a grimy metal t-shirt, and embarking upon a set of dance moves down the centre of the floor divide.

“We play with some incredibly violent live bands, so this is like Eurovision Song Contest” we are informed….. then bam, the band kick in and it sounds as though hell itself is throwing a one mighty tantrum. Machine gun beats fire all over the place whilst grinding guitars and bass melt around one another in a fury… God Mother, whilst fun, are a ferocious live band and one not to be missed. Eurovision though? There are to Eurovision what Brian Blessed is to ‘ASMR’.

You can find out more about God Mother from their Facebook page.

Words and photograph by Christopher Lloyd. You can read more of Christopher’s writing at his author’s archive.