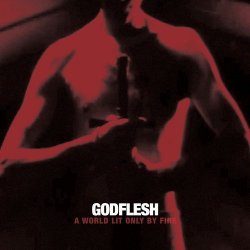 Highly influential UK noisiness Godflesh returned this year as forward thinking and precision loud as ever. Their Manchester show saw them hit the dark groove as well as ever reports Rob Haynes.

Having set a standard for primal drum machine-driven brutality in the 1990s, Godflesh are back  – at least, it’s safe to assume that it is them, these two lurching silhouettes amid blinding backlights and a muggy ocean of dry ice conjuring the fearsome wall of noise.

Absent since 2002, this year’s comeback album, A World Lit Only By Fire, is an extremely Godflesh sounding record, full of stripped-back muscle and sinew, all the familiar elements present and correct – drum-machine patterns, part hammer and anvil, part hip-hop, Justin Broadrick’s collapsing glacier of guitar and barked vocals, and GC Green’s titanic bass, an extraordinary sound which conjures images of continental plates grinding together miles beneath the earth’s crust and surfacing with devastating force.

The set opens with six or seven tracks from this new record, starting with New Dark Ages which resembles a Terminator slowly being assembled and primed for attack, while the double bass drum effect in the chorus of Dead End feels like we’re being attacked by the building itself, the air molecules around us forming a gigantic brick which batters back and forth.

It’s a set of two chronological halves, and just as a nearby pack of beardier-than-thou knuckleheads are starting to get restive and call for old songs, the double whammy of 1989’s Christbait Rising and Streetcleaner takes the atmosphere up another level still. The intensity of these older songs remains potent, the mutant disco of Spite, the battering ram of Crush My Soul and a final, destructive version of Like Rats (introduced by Broadrick as being “for the Northerners”). It’s all as primitive and lethally effective as a virus, a glorious release of dark energy that sends us out into the cold night stupefied and grinning.