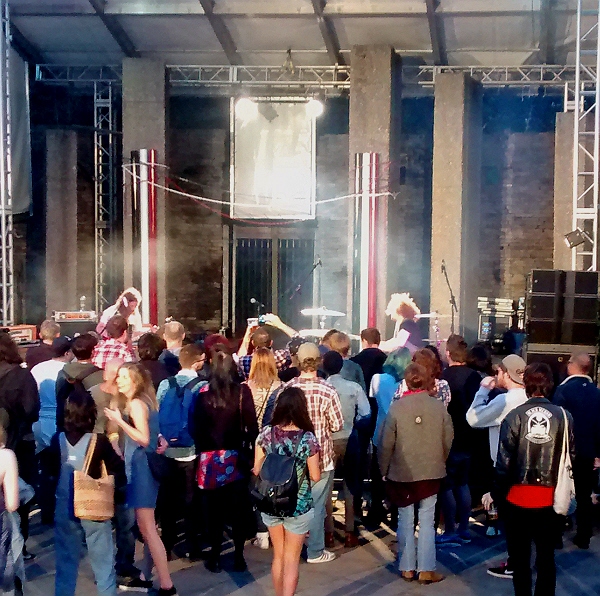 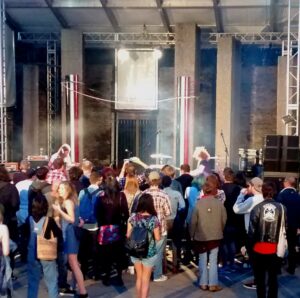 Christopher Lloyd takes to the Amphitheatre to review the Birmingham bringers of aural thunder.

Audiologists Rejoice, for you’re going to get increasingly busier over the foreseeable future. Birmingham’s finest purveyors of thunderously ear punishing rock, God Damn, are going from strength to strength.

Fresh from a string of European dates the band are on home turf playing in an amphitheatre within the Birmingham Midlands Art Centre, as headliners of the ‘One Beat’ Festival.

As settings go, you’d be mistaken for thinking you were about to endure the most wispiest of folk singers, for everywhere you turn there are gorgeous trees, lovely blue sky and the chirping of birds. Within ten seconds of guitarist/vocalist Thom Edwards making contact with his guitar, foot poised above more sonic pedals than Imelda Marcos has shoes, you become acutely aware that it is business as usual. Noise splendid noise, all layered above a ridiculously catchy amalgamation of blues punk grunge rock.

The set is a short one and it totally exemplifies exactly why God Damn are making such a big name for themselves. Tracks such as ‘Silver Spoons’ and ‘Skeletons’ have a majestic weight of volume to them, but not at the expense of the tunes, which stick in the head for days after hearing them.

There may be many people in the audience whose fingers head ear-canalwards, yet they’re still frantically nodding along whilst mouthing every word. Drummer Ash Weaver hits the drums with such forceful precision that you can feel every kick drum and snare hit as if you were being punched in the throat. There is no doubt why Dave Grohl personally chose them to support the Foo Fighters earlier this month. When Ash’s drums meet Thom’s guitars, aural storms brew that threaten to level the ornate Ampitheatre.

There is a school of thought that the internet has killed the traditional rise to fame route bands used to take, the record deal/tour/tour/tour/tour til’ you drop method.

Why do that when you can just put it online, Kickstart or pledge it? Those methods have proven great if you want to preach to the converted. God Damn understand that to do great things involves graft, and have slogged hard over the last couple of years by constantly playing shows, often twice a day. Indeed, shortly before this set in Birmingham the band were playing in Sheffield as part of the Tramlines festival.

Matching this work ethic to such great music and ferociously intense live sets leaves one with no question that God Damn’s ascent is far from over.