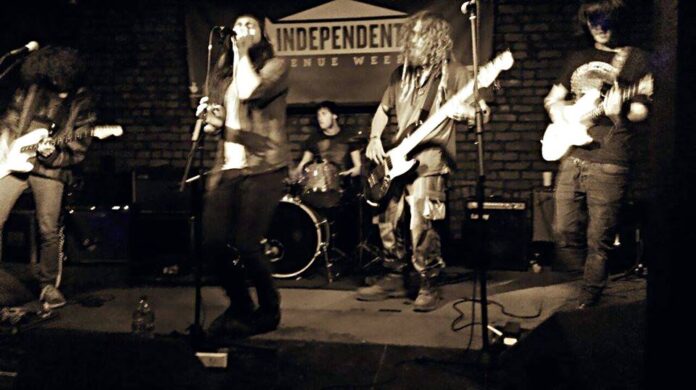 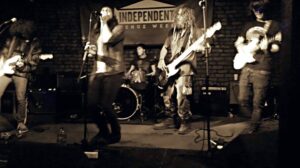 An exciting new band from Manchester, The God Complex, bring the energy and excitement of their live performance to Liverpool as part of the ‘Save The Lomax’ campaign.

Already a supporter of the work being done to re-open one of Liverpool’s iconic grass roots venues, I was eager to catch The God Complex at the Save The Lomax gig, which had been moved from the advertised venue, The Arts Club, to Bumper. Having listened to some of their recorded material recently, I hoped they could bring the urgency of their studio output into their live performance.

The tiny stage was barely large enough to contain the energy this band produce. The impassioned delivery added resonance to the music, the energy and emotion threw the music at you, forcing you to take part. The growling, dirty, desert rock The God Complex play assaults the ears, lambasting you with sound.

Songs like ‘The Death Harmonic’, the title track of the forthcoming EP due for release soon, showcase the musical virtuosity of the band. The guitar of Dan Coleman came into the limelight, producing some virtuoso rock licks. The track smoldered with intensity, showing The God Complex aren’t just about the noise, but can still dominate the stage during the slower tracks.

The playing on ‘Like a Glove’ was a sonic masterpiece, the band couldn’t have been tighter on this if they’d been welded together. Strong, smooth vocals, brilliant rhythm section and guitars all churning out the blistering sound. This was one of the best things The God Complex performed on the night, a hell of a track. By now the energy was radiating from the stage, the guitarists risking life and limb bouncing over boards and cables, narrowly missing the barefoot bassist Rev Johan Grimshaw, as they went. Things were getting crazier by the minute.

Blow really showed what Tom Guyer could discharge vocally; pure rock brilliance.  This was their last track, and The God Complex brought their finest contribution to the stage. The music continued the frantic pace, while the band finally found the confines of the stage could no longer hold them, guitarist Greg Dixon and Tom Guyer scaling the lower speakers, before jumping down, knocking over mike stands and running through the front of the audience. The music didn’t suffer though, the grinding heaviness of the sound reverberating round the room, with Connor Dowd beating the drums into submission as if his life depended on it. It was a superb finale. I was sorry the set had ended. I was only sorry a technology malfunction has left me bereft of photos to share.

I have to say here, the sensible part of me does not condone the potential damage to equipment these sort of antics produce, but the rock chick inside just loves the energy and showmanship.

I’d just like to talk about the Save The Lomax campaign for a minute to end the piece. The God Complex came from Manchester to support the campaign because bands like this care when venues they play disappear. Trying to re-open The Lomax was the real reason for the gig, which featured several other excellent local bands. Liverpool and many other cities are losing the places bands need to play on their way up. If these venues close, where can they begin the journey?

I had many memorable nights in The Lomax. It had a welcoming vibe and was truly loved by the people who went there. Listening to the bands playing in Bumper was a timely reminder of what will be lost if our live music venues close. I had a fine night. I hope there are still places left where I can do the same for years to come. I also hope a re-opened Lomax is one of them.

The God Complex are playing dates at the following venues:

They have an EP release ‘The Death Harmonic’ due this spring.

More information on the Save The Lomax campaign can be found on Facebook.