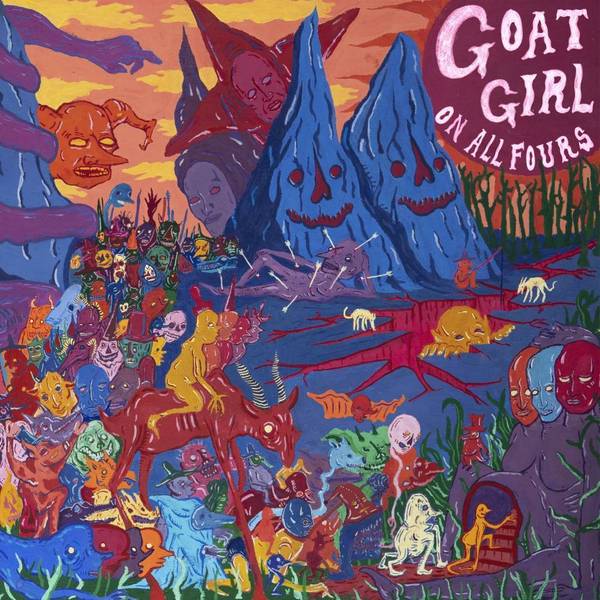 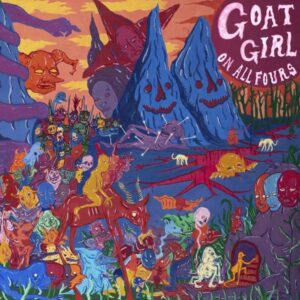 Three years on from their debut album, Goat Girl return with On All Fours, expanding their sound and their horizons without losing any of their distinctive lo-fi appeal.

Gone too is the observational perspective on the minutiae of London life – creeps on the Tube, forced jollity at parties – to be replaced by a wider world view that takes in lockdown anxiety, social injustices and the state of the planet. The personal becoming the political.

If you want to put a punk perspective on their musical development – and irrespective of their sound Goat Girl were always the essence of punk in attitude – then if they started out as the Slits, then they’ve grown into The Raincoats or The Au Pairs.

If the first album was sonically all about space, the second is more about the embellishments – synths and drum machines, with flashes of violin, viola and trumpet – that fill it.

It’s also about expanding their palette, dabbling in new mediums, with elements of funk and EDM, soul and RnB; even influences of folk and jazz creeping into the songs.

Written and recorded during the pandemic in their natural habitat of South London, these songs started life as demos and developed during sessions in producer Dan Carey’s home in South London.

There’s plenty of evidence of pandemic paranoia in these songs: a sense of claustrophobia and befuddlement in the woozy soundscapes behind those crunchy guitars and solid grooves. And a new ingredient.

Once again singer Lottie Pendlebury (aka Clottie Cream) adopts a listless style suited to the languor of the grooves, but injects a sweetness that’s not always apparent in the lyrics (“I have no shame when I say ‘Stay the fuck away’” she warns ominously in the opener, Pest).

Ironically (or deliberately), she sounds sweetest at her most vulnerable: the almost conventionally pretty Anxiety Feels features smooth, soulful harmonies and a stuttering, suffocating rhythm.

Written after Ellie began suffering serious panic attacks, it’s a plaintive cry for help: “Please don’t leave me alone staring out of the window / I know I should get out the house do something useful… I find it hard sometimes / I don’t wanna be on those pills.”

Closing In focuses even more strongly on Lottie’s depression and anxiety, the theme of loneliness and indecision more openly explored in Anxiety Feels and They Bite On You, in which she uses the experience of contracting scabiers as a metaphor for parasitic corporations.

Bass and drums take centre stage in many of the songs, such as the laid-back funk and stop-start rhythms of Once Again, while dancefloor synths drive Sad Cowboy – another song driven by that sense of isolation from the outside world – before its galloping rhythms and Western twang take it off in a new direction.Sad Cowboy

In the warped and far-from-jazzy Jazz (In The Supermarket), her wordless vocals carry the melody through what is by far their most adventurous song to date. There’s an almost reggae undercurrent to the bass and guitars, while trumpets blast over rattling percussion.

Then the song starts to disintegrate and melt into itself, slowing to a languorous crawl amid unhinged trumpet and viola, as if suffering from some sort of sonic malaise. It’s many things, but it’s not jazz.

Listening to the whole album, it’s clear that On All Fours is not so much a change of direction as a natural evolution. The one constant is the gritty guitars and enervated vocals of Lottie and Ellie Rose-Davis (aka LED).

There are few songs that you could imagine being included on their debut three years ago; perhaps The Crack, with its big guitar riff that wants to be White Wedding when it grows up, though its big environmental theme is very much a feature of the new widescreen Goat Girl of 2021.

Perhaps too, Badibaba might have been on that first album, with its swaying rhythm and crackling guitars and ad-libbed chorus, though once again it shifts and shuffles and its overlaid harmonies and softly squelching synths lend it a richness and sophistication that would have seemed out of place back then.

Never Stays The Same combines both sides of Goat Girl, beginning with an erratic, skittering pace (inspired by Ellie’s family pet, a greyhound called Tigerlily), before switching to a dreamy, spaced-out sound with violas on the chorus, mimicking the ssense of stasis we’re all feeling in lockdown.

As the album progresses, its style becomes more diverse: Bang could be a slice of Eighties electro with its waves of synth and dreamy vocals, while Where Do We Go From Here? has a descending synth melody that might have been borrowed from OMD and a burbling bassline beneath.

The glitchy electronica that underpins the plangent guitar motif and violin melody of the closing A-Men seems to suggest the future direction of Goat Girl lies in this area. It brings things to an anthemic close with a refrain that perfectly encapsulates the philosophy of the album itself: “I never thought that it would change / I never thought it would stay.”