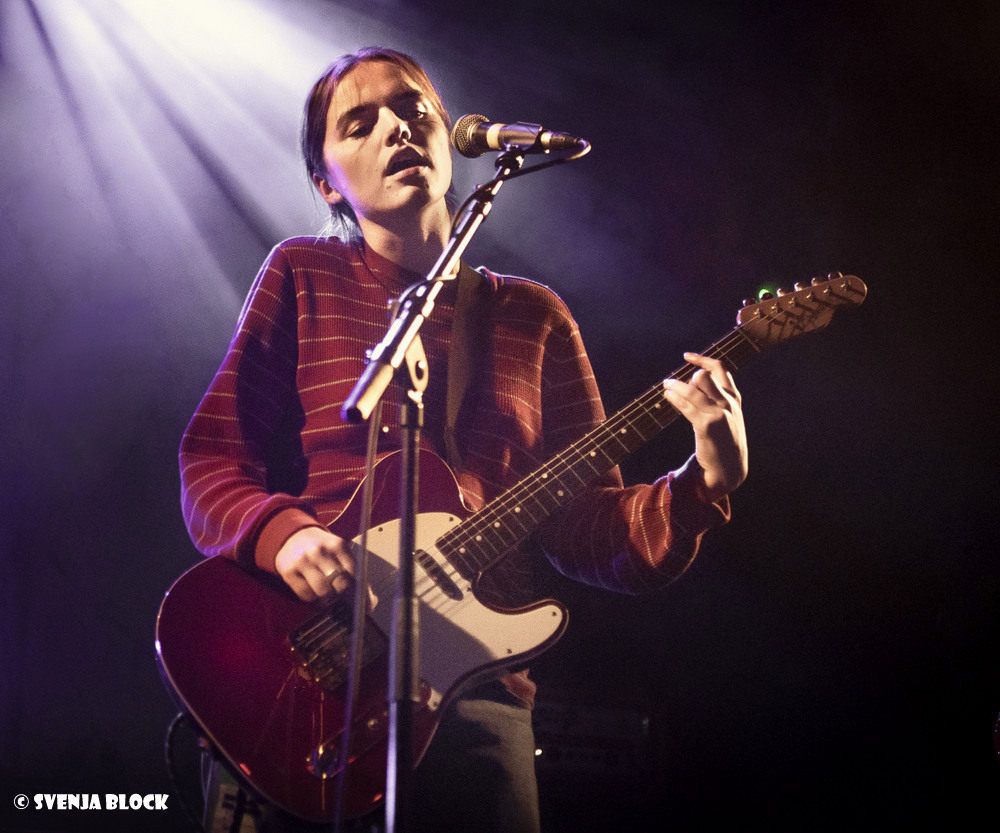 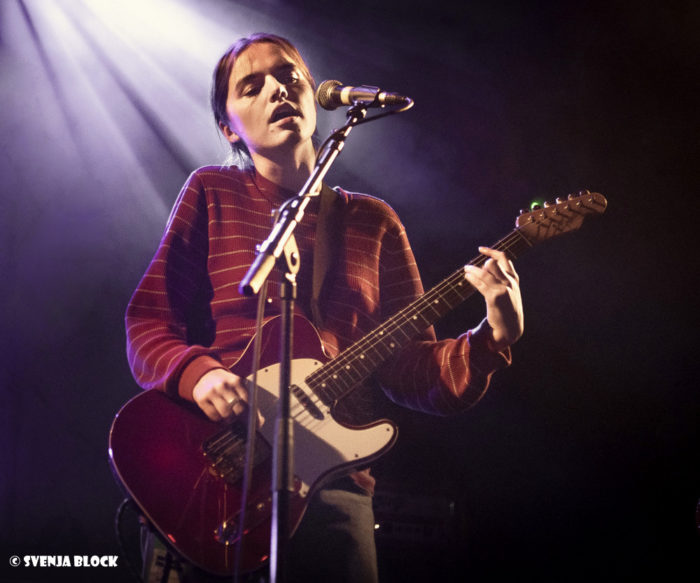 Goat Girl delivered a binary gig for our non-binary times at KOKO in London and it made Louder Than War’s Andy Duke dance like Neo from the Matrix.

Goat Girl dispense with the big reveal. Whereas other more self-conscious bands would have guitar and drum techs setting up their musical equipment before hitting the stage, this South London quartet approach their pre-show preparation in DIY fashion. Despite the 1400-strong capacity crowd at KOKO, there is no pomp and circumstance to the band’s arrival and I’m confident the foursome wouldn’t want to have it any other way.

Instruments are tuned up on the fly and amp settings tweaked by the group themselves before launching into their opening number. Beneath stark blue flickering lights, Lottie ‘Clottie Cream’ Pendlebury strums the haunting opening chords to Burn The Stake on her red Telecaster before adding her trademark lower-register vocals. Augmented by a violinist and synth player, the impact when the whole ensemble joins in is epic and creates an unnerving wall of sound. The sonic onslaught is matched visually with Rosy Bones’ drum fills being partnered with rapid strobe lights while the echo-laden fiddle creates a top layer of dissonance in tandem. This is a band who happily combine the jarring with their jangle on recording and the juxtaposition between harmonious and discordant is even more prominent live.

On tracks like Creep and Viper Fish, the impressive vocal harmonies from guitarist Ellie ‘LED’ Rose Davies and bassist Naima Jelly are executed with great precision and blend beautifully with Clottie’s voice. In contrast, the instrumentation adds a hesitant, tense and often atonal element to the arrangements. It’s an ambitious direction to take and one which the band can powerfully pull off when they’re in sync with each other. As the band’s set is characterised with pendulum swings between tight and ramshackle, however, ambition and realisation are frequently at odds with each other helping to create a sense of urgency to the proceedings. It doesn’t always make for an easy listen but the results can be captivating when the group get it right. On Cracker Drool, the now six-strong incarnation of Goat Girl does just that. The restraint of the drum machine-infused recording is replaced with a more driving beat and the track’s drop downs and tempo changes are more dramatic and loose. The Man With No Heart Or Brain, similarly, succeeds in mixing disparate stylistic elements. The dark ditty’s halftime, quasi-ska groove merges with the tempo and pace changes of a menacing carousel ride’s music to great effect.

Although lacking in finesse at times, this unique hybrid between The Clash, circa London Calling, and Mr. Bungle is a highlight of the set. Scanning the audience while this track was reaching its apex, I noticed an unusual yet endearing trend in the audience’s movements. Rather than adopting traditional ‘indie music head bopping’, more than half the crowd appeared to be doing a variation of how Keanu Reeves avoided gunfire in The Matrix. This slow motion ‘Neo Dance’, with its exaggerated bendy shoulders and back, works so well with Goat Girl’s music that I found myself involuntarily doing a Keanu myself.

The band pick up the pace with The Man showcasing both Clottie’s impressive alt-country guitar chops with sumptuous vocal harmonies being added from the band. This far more traditional affair sees the ensemble exchanging quirkiness for increased tightness to good effect. The aforementioned pendulum swing rapidly returns to the unnerving side, however, with a spoken word delivery from guest performer Lincoln Barrett on A Swamp Dog’s Tail – a charmingly creepy addition to the set. Anchored by Clottie’s tight guitar arpeggios, a more melodic sensibility returns with an emotive version of Lay Down before the band waltz their way into the duology that is I Don’t Care. Their inspired cover of ‘Tomorrow’, from the 1976 film Bugsy Malone, takes the recorded version to a higher plane with richer country-tinged vocals and an even more restrained delivery from the band. The band close their set with Country Sleaze which showcases the deft low register riffing from Ellie “LED” Rose Davies. The twang from her shell-pink Fender Mustang is a more aggressive prospect live than on the single and delivers a trebly crunch that wouldn’t be out of place on a Tom Waits recording.

Musical tightness isn’t a prerequisite for a great gig. But chemistry is. And that’s something Goat Girl have in spades. More importantly, this is a group who clearly love what they’re doing and that enthusiasm is infectious. Soon, everyone will be doing ‘The Neo’ to their off-kilter beats and non-standard grooves.

Photo © Svenja Block. You can find more of Svenja’s photos at her Pixieset, Facebook and at her Louder Than War author’s archive.