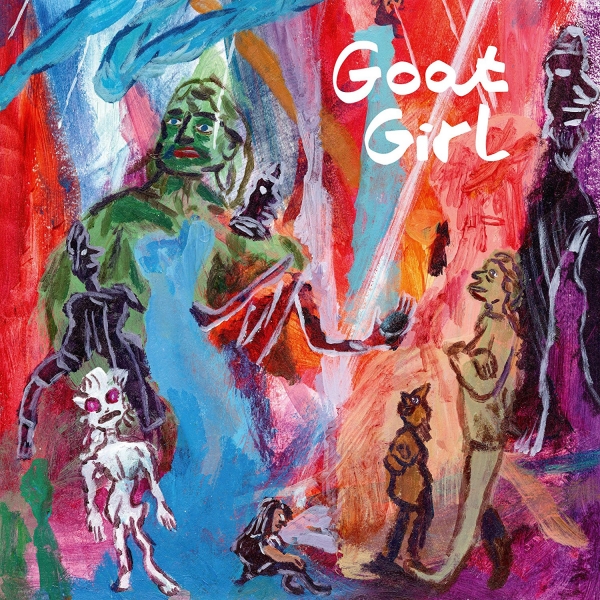 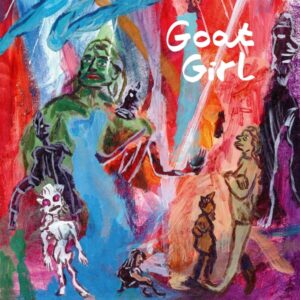 Goat Girl, the feisty female foursome from south London, come of age with a debut album that places them in the pantheon of punk icons, without sounding at all how their fans might have expected. Tim Cooper admires their ambition, salutes their intentions, and likes what he hears.

There’s always been something about girls with guitars. From The Runaways and Raincoats to the Slits and Au Pairs; from The Bangles, Breeders and Belly to Sleater-Kinney, Veruca Salt and L7, through War Paint and and Pins to The Orielles and Little Mix (joke): the list not only goes on, but keeps getting longer. To the pantheon of women in rock we must now add Goat Gir. Emerging from the same South London DIY scene that produced Fat White Family, HMLTD and Shame, they’ve been slogging away in support slots for some time, steadily building a following the old fashioned way, with support from the scene’s youth bible So Young and its acolytes.

Their debut album has taken its time – “from the wee poppet ages to our fully formed lady selves” as they put it – and proves well worth the wait. Somehow they’ve managed to capture the punk spirit without joining the obvious dots: despite the punky nicknames (Clottie Cream, Rosy Bones, Naima Jelly and LED) they don’t trade in the cliché of buzzsaw guitars, thunderous drums and angry vocals; quite the reverse. Goat Girl don’t seem angry at all; just prematurely exhausted. They exude a strong sense of of ennui, listlessly cataloguing their tales of alienation in a litter-strewn urban wasteland of gang wars and knife crime, perverts and predators, shit parties and perfunctory one-night stands. It’s the very same landscape of desolation and despair that kick-started punk in mid-Seventies London, but with different drugs.

Goat Girl’s songs are short, sharp and occasionally to the point. They often have no point, which kind of *is* the point. They’re wonky, warped and woozy, languid laconic and lethargic. They sound as if they first picked up their instruments last week, which is a hard trick to carry off when you’re as musically proficient as they actually are. There are 20 songs here – or, to be more accurate, 14 songs and half a dozen sketches acting as interludes – and while some of them are fully-formed tunes that you might sing on the night bus home while trying to obliterate the stench of kebabs and super-strength lager, a fair share of the credit must go to producer Dan Carey, best known for his work with another chronicler of urban nightmares, Kate Tempest.

Just as Slits were given a makeover by Dennis Bovell, bestowing on their debut album (Cut) a sound at odds with the chaos of their live performances, so too has Carey given Goat Girl a sonic template: one that deliberately drains the energy of their live shows sound as if they’ve followed his previous protégée’s prescription of Ketamine For Breakfast. The band play their instruments as if tranquillized, or hungover, or coming down; or maybe they’re just bored. Bored with society’s expectations, bored of society itself.

Burn The Stake sets out their stall: Lottie’s listeless vocals, over lazily strummed guitar and bass, listing the malaise: “The dead weights, zombie state / Shoot them in the face and castrate / They’re all filthy fakes, latte break / and Paedogeddon shakes, Rolf gyrates”. By the end the anger kicks in: “Build a bonfire, build a bonfire / Put the Tories on the top / Put the DUP in the middle / And we’ll burn the fucking lot” Elsewhere they tackle Tube perverts in Creep, which adds an oddly anomalous fiddle and fretboard fingersqueaks to a song that staggers drunkenly towards another violent conclusion for the “Creep on the train / With his creepy gold chain / With his dirty trouser stain… I want to smash your head in.”

I Don’t Care, a song divided into two parts, separated by a curious interlude of off-kilter piano and shuffling beats, sums up their nihilist manifesto with a depiction of a party you definitely don’t want to go to.  Lottie describes the scene: “You walk inside the dirty room / The people dance, you have no place / They talk about how much they care / For all their clothes and fancy hair… I don’t care.” In part two, which builds relentlessly towards something approaching a crescendo, she reaches her inevitable conclusion: “I don’t care what the people say, cos the people don’t care anyway”

Goat Girl’s songs lurch and lunge like a female counterpart of The Fall, if Mark E Smith had grown up listening to country music rather than watching Coronation Street. There’s a country twang to many of the songs here, though you’d never hear Dolly cover Viper Fish with its references to “phallic towers, cyanide killings”; Cracker Drool is a jolly two-step of swirling guitars and primitive drums and there’s even more of a southern-fried flavour to Slowly Reclines, while The Man With No Heart Or Brain – an attack on male vanity and shallowness – wobbles unsteadily along like a sea shanty and Little Liar challenges the Ramones’ Beat On The Brat for lyrical minimalism.

Sure, it’s an uneven collection with a few throwaway fillers, and the interludes interrupt the flow of songs, but there are gems aplenty on Goat Girl’s debut and overall it’s a collection that bodes well for their future; more importantly, it sounds just fine right now.