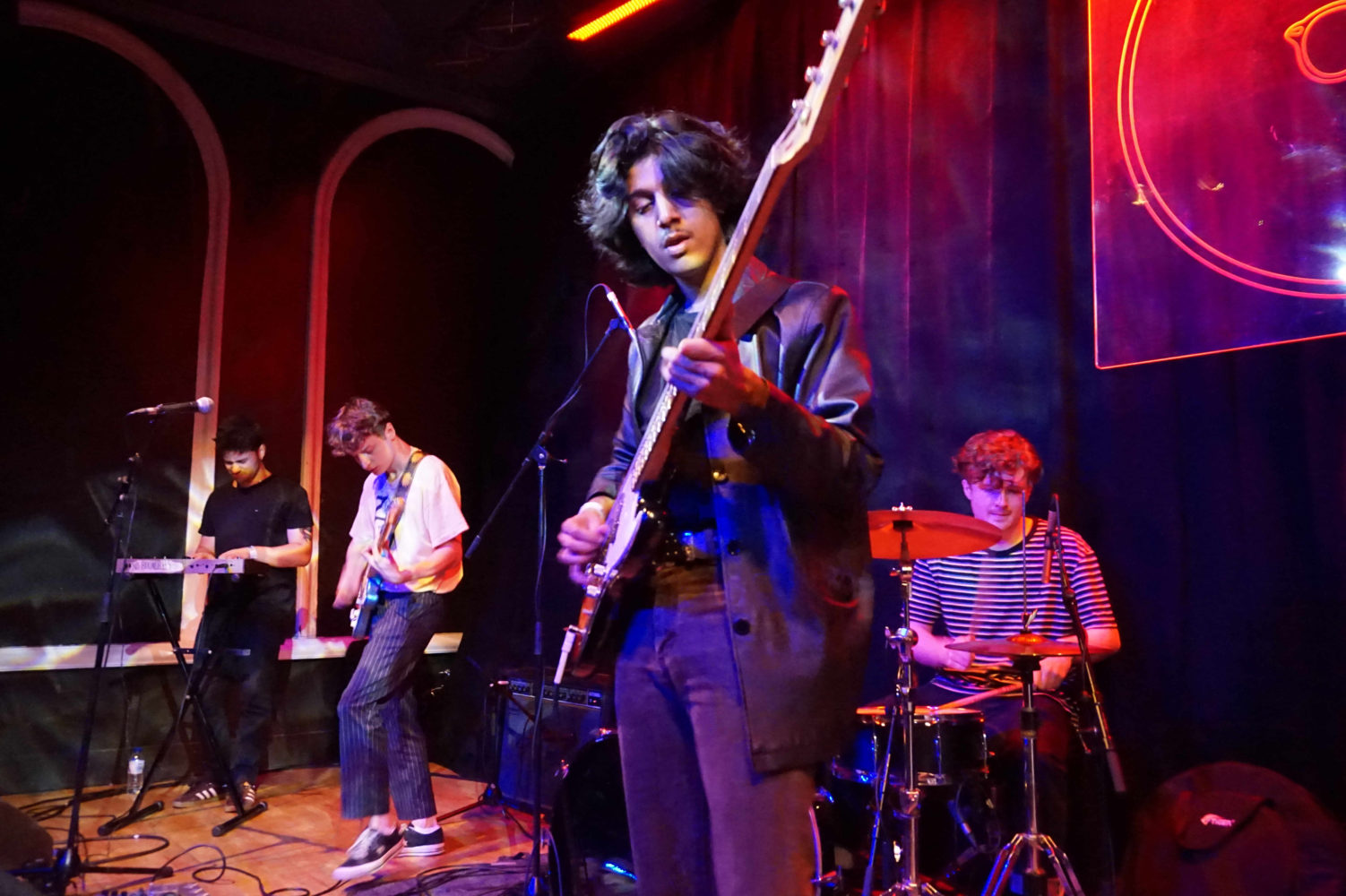 Burnley’s Goa Express catch up with Will from Louder Than War, ahead of the release of their debut EP.

There’s a funny tasting bottle of Budweiser being passed around, as well as a lack of bottles of the American lager in the fridge, to the evident disgust of the rooms current occupants. Not even shouting could get you heard in Band On The Wall’s green room tonight, with the room being only a few hundred quid’s worth of narcotics short of iconic rockumentary, Dig. Drinks are swigged and cigs are rolled to fill the limbo between soundcheck and gig, a period which is can be tame, relaxed and anxiety-ridden for some young bands. But not the Goa Express, who are throwing near enough throwing a pre-show party. A statement manages to rise above the chaos;

‘We’ve not even written a fucking setlist man’

If finding a minute to write a setlist proves difficult, finding fifteen to answer questions should be recognised as a lifetime achievement. But eventually, The Goa Express, manage to collect themselves and engage in conversation. 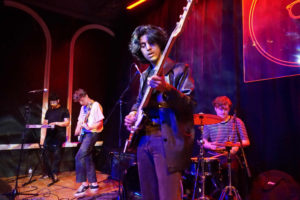 The term ‘charity shop culture’ is as fresh to some as it is alien to others. Locals to the Manchester area may describe it as the ‘Fallowfield fashion’, to give an understandable definition to the term. Saving the pennies on clothing is always satisfying. Ralphy shirts, Levi jeans, Nike T’s. The ‘one off’ value of such items of vintage clothing has created mass appeal and a spurt in popularity within the securing of such garms in thrift shops, particularly within the student/band demographic. But how long such could a system last? A large group of people happily paying a fair price for something which they feel comfortable in? Step in companies such as COW, who have successfully exploited the movement, by putting outrageous price tags on thrift shop pickings. 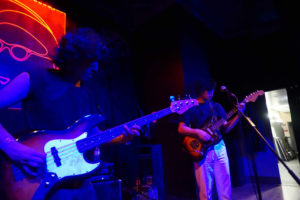 ‘You either do it cos you genuinely cannot afford to shop anywhere else or you do it cos you have the money and you want to look cool. We have no fucking money’, announces James (guitar+vocals), making his voice rise to the forefront of the chaos of the room. The opinions on the appropriation of charity shop culture are fired up, as James opens; ‘They (Depop/COW) find all the decent stuff in charity shops then fucking charge ridiculous prices for them,’ before Joey (guitar) adds ‘Straight bullshit that’, with Naham (bass) finishing ‘Its all about profit they can make on it’. Geography and location seem to be factor, as James compares Manchester to their hometown of Burnley; ’If you grow up in Burnley there is not one fucking decent clothes shop to buy anything from, so you’ve gotta make do. I’ve got some bargains in charity shops.’ There is clearly more of an audience interested wearing their da’s clothes within the bigger cities; more universities, more students. But outside of the UK, the story is different, as James explains; We’ve just got back from Berlin and we were going in shops selling all designer brands, and they were not ripping us off like they do at COW in Manchester. They just wack a massive sky-high price on shit.’

Artists in general have a lot to do with the resurgence of vintage clothing. The style of artists in the context of the music they make is always an interesting observation as a fan. This is what the observation should be; music followed by style. However, the over-commercialisation of music has lead us into a period where artists struggle to be noticed if they don’t ‘look the part’, as Joey and James engage in tonight’s first round of convo-pong; ‘There’s bands that make music and you listen like, ‘yeah this is fucking sick’ and they come stage and they’re all normal looking old men and you’re like ‘whaaaat’, is the service from Joey, before James returns with ‘That’s better to have though’. Joey further adds;’ If they don’t release any press images of what they look like and they release music and you love it when you go see them playing and they’re not what you expect’. Naham is still trying to get himself heard, but not before James adds to the rally; ‘If you’re more bothered about your image, go and get a different career man’, before Naham manages to find an edgeways sized gap in the conversation, adding; ‘It shouldn’t be like that, but I feel like it definitely is. Music should matter more than image.’ The chemistry between the three is similar to that of three siblings each trying to create their version of the truth to their parents before landing in trouble. 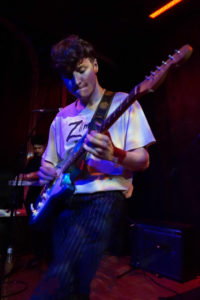 Fashion and image aside, Goa Express have recently recorded their debut EP, at Leeds’ iconic and renowned studio, The Nave. Having taken three years to get to point of recording their debut EP, it has been a journey to say the least. From Bryne’s (ex-keys) garage to Naham coming to turns with fret’s, as Joey reminisces; ‘Me and Clarkey (James) did a bit of guitar, Sam did a bit of drums and we thought why don’t we start a band? Naham didn’t even know what a fret was. Then we met Bryne, he was like ‘yeah I play this and that’, so we went to his garage.’ James adds, ‘First gig we played we played was in that garage’. Laughter follows the recollection of the memory, as Joey finishes the tale; ‘50 people crammed into Brynes garage, and his mum was like ‘you’ve gotta calm it down they’ve got babies next door and that’, and Bryne was like ‘we’ve got two more songs mum’ and his dad comes down, pissed as fuck like ‘your gunna have to calm it down’, and everyone’s going ‘one more song’.

It hasn’t all been plain sailing; heavy weekends result in heavy comedowns. James brings up a lack-of-serotonin-induced Weatherspoons scrap, as the second round of convo-pong unfolds, Joey opens; ‘After Beatherder, Naham had been doing bare dids all weekend’, before James adds, ‘Me and Joey came back from Benicasim so we were all on horrendous comedowns and it full on kicked off’. Above the laughter, Joey further adds ‘Naham was shaking going ‘come on then’, before James re-enacts, ‘I’m going ‘come on Naham just fucking smack me around the head’. As funny as the tale is to tell, at the time it was dangerously close to the end of Goa Express. Definitely one to tell the kids.

Besides the fun and games of band life which has been enjoyed in these three years, lack of financing has held the band back, as James provides; ‘There’s no financial income apart from what we make ourselves.  No one else funds us, apart from our manager.’ Goa’s only encounter with label backing came with Wrong Way Records, which ended abruptly after a wishy-washy attempted release of their debut single, ‘Kiss Me’ with B-side ‘GOA’. The encounter was but a learning curve; onwards and upwards is the only way Goa know, as Naham comments; We’re always writing tunes and everything. Like you record something that doesn’t get released for five months and by then you’re like ‘ah we can do a lot something better now’. Getting drummers to shut the fuck in an interview is hard. But if you can get one to talk some next level inspirational quote in interviews, you’re probably on the correct career path;

‘We do appreciate what wrong way did for us’- Sam Lauder, August 2018.

Further pressure comes from university. As any student who does university and actually acts like the student that our parents give credit for live by one motto; ‘shit gets done’. So as far as that’s concerned, there will always be time for practice and gigs. But down the line, that even older motto is bound to slowly make its way in; time is money. There has to be a point where band life becomes a job rather than an expensive hobby, as James shares opinion on behalf of the band; I don’t think any single one of us strives to be rich and famous and in the headlines, that’s when you turn into a fucking wanker. As soon as you’re trying to please the public you look like a fucking wanker’ before a heartfelt honesty is provided by Naham; ‘We’re all from backgrounds where we don’t have any money anyway. We don’t need anything excessive, just need enough to buy food for tea then that’s it. No one needs anything excessive, no one arsed about it.’ Tea on the table, clothes on your back, a few beers on your rider; what more could a band ask for? 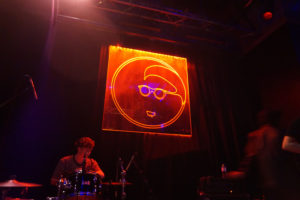 As an unsigned band, Goa’s progress thus far is impressive. Getting regular, and well attended, support slots at Hebden Bridge’s Trades Club, Goa have played iconic venues of Manchester and Leeds, including Brudenell Social Club, Gulliver’s and Deaf Institute. With this, Goa have also performed with some of the UK’s most well-respected band’s, including Cabbage, Yak and The Orielles, as James states; ‘It’s always good when you know the band beforehand, then you can just party with them before and afterwards.’ Enjoying such support slots is one thing, but there is a strange mix of reassurance and frustration on behalf of the band, as Joey elaborates; ‘It’s a bit of both really. When you see local bands doing really well, it’s like ‘we just want that push with us’. We’ve worked really hard since we started, we see a lot of bands around us getting that push. We just need that bit of exposure, that push which gets us more gigs, more listens and that’s all we want’.

It is the chase of the dream which inspires 110% of young bands. But Joey has already decided that lack of hair from James and Naham will be the end of Goa.

‘What happens when you do go bald then?’, I enquire.

‘Then it’s over, got nothing whatsoever’- Naham Muzaffar, August 2018.

Words and photography by Will Metcalfe whose author page is here.