Home Music Interviews Band Interviews Why you should go and listen to The Tuts … right now! 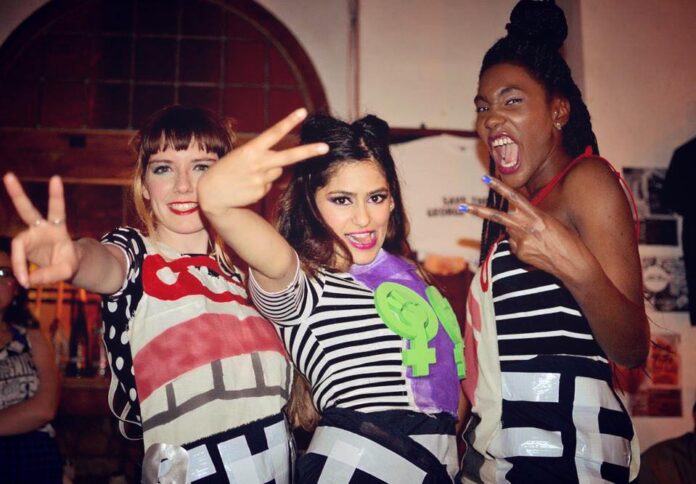 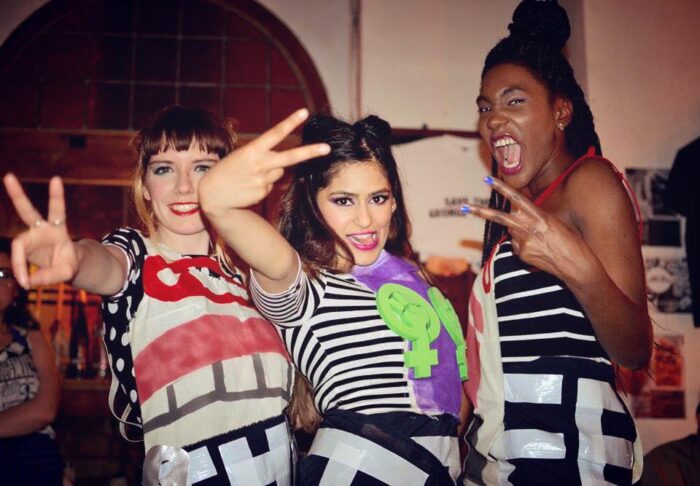 If you’ve not heard of feisty, all girl West London punk band The Tuts then they are a band that you need to get on your radar like right now says Sophie Sparham. Here she explains why.

I want to describe them to you in one sentence, but it’s proving more difficult that I first thought. In summary, I’d say that they’re an epic, DIY, feminist three piece that are taking over the world with their catchy punk and indie vibes.

When I first saw The Tuts at a queer riot grrl night in Cov called Revolt (which I’d highly recommend), I couldn’t get over how much they blew me away with their live performance. The energy coming off these women was amazing, not to mention how brilliant their musical performance was. Everything was totally spot on. I felt like a light came on in my head asking me why there wasn’t more of this music?!

I was then lucky enough to check them out again when they supported The Selector, after they were handpicked by Pauline Black, who witnessed their performance at Glastonbury.

Whilst at the gig, I got to speak to these wonderful women about what they stand for. I wondered if feminism had been something they’d intended on pushing when they were at school, but soon found that it was a natural progression.

“We just did it!” They all yelled.

“When we were at school all the other bands were boys, apart from one girl who played guitar, who taught me how to read tabs. But we never thought ‘yeah let’s do it for the women’ even though we liked that concept. We wanted it to be all girls, but there wasn’t a reason like lack of females being giving a platform, we didn’t know anything about that! We were just like yeah we’re all girls and we just wanted to play in a band.” Nadia explained.  “It was only afterwards, when we started to question things and be like no that’s not normal.”

“In a way I’m glad we weren’t influenced by girl riot, as you can just start mimicking that. It’s fine doing that if you want to do that because it’s great and empowering. But for us, we had to form our identity.”  Bev added.

“We’re naturally riot girl anyway. Regardless of riot girl, there’s still going to be a riot.”  Nadia added, explaining that her guitar got smashed on stage the previous night.

I continued to ask them about the music industry and what it was like to be in an all female band within it.  “It is amazing, but when you talk to industry people they always mention other girl bands, as if there can only be one girl signed at a time in a big way. Why can’t there be loads signed and not focus on the fact that they are girl? It’s messed up.” Harriet questioned. “You can be a completely different genre and they’ll still group you together because you’re girls.”

“And they can be totally different like Buzzcocks and Mumford and Son, but they still see them as the same because they’re girl bands.” Bev agreed.

Moving away from more serious subjects. I found out that Nadia is obessed with Pete Dockerty and once drunk from his bottle of gin, which resulted in swollen tonsils the next day… nice! Nadia also has a big influence on the outfits that the band wear, which if you follow their Facebook page, are pretty damn impressive.

“All my clothes are from car boot sales,” Harriet jokes.

“Harriet doesn’t go to be trendy or hipster she goes because she’s poor!” Nadia adds.

“We love going car boot, it’s an occasion, like a family affair.”

Yes to car boots! The girls say that their aim to find their album at one one day, as that will mean that they’ve made it. Haha, I wish them all the luck.

The band recently recorded their valentines single with Paul Tipler and brought out their own video for it, which was created by Jen, Harriet’s sister, singer of Colour Me Wednesday and by the sounds of things, evil genius because of the amount of talent she has.

I asked the ladies what they did outside of the band and they all replied with ‘think about the band’. Haha, good answer. However, Nadia did say that she played girls football, which I thought was pretty cool. That’s another thing that I love about them though, how god damn dedicated they are to make it in this crazy industry.

Big things are lined up for the band. They’ve got festivals booked and have got a mini tour planned for May.

“We want to know where people want us to come back, so drop a comment on the Facebook!”  Nadia says.

As well as all of this, The Tuts have also just been confirmed to support The Undertones, which is huge news! It looks like 2015 will be the girl’s year.

“We think that something big could be happening pretty soon.”

And so it should.

The Tuts are a band that the world has been missing. They’re exactly what we need right now.

Go and check out one of their shows before it sells out. Seriously.