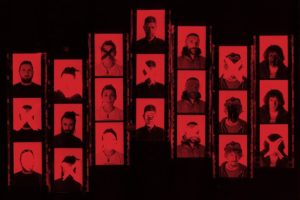 The mighty GNOD are back with their fantastically named new album JUST SAY NO TO THE PSYCHO RIGHT-WING CAPITALIST FASCIST INDUSTRIAL DEATH MACHINE which is released on 31 March 2017 on Rocket Records.

It is an obviously politically charged album and preview track ‘Bodies for Money’ is no exception. This has got to be the first of many angry and noisy releases from bands in these depressing, divisional times surely?

Ok, back to ‘Bodies for Money’. A feedback drenched start gets this track going. An almighty riff beckons and rumbling drums come in. This is then COMPLETELY drenched by a wall of cacophonic noise. Paddy Shines’ pained and outraged vocals still cannot drown out the noise this band produces as the riff pounds on and on in almost an industrial way.

Experimental electronica is introduced just before a gentle segue comes right in the middle. The respite doesn’t last long though as the onslaught of noise builds up and up around THAT riff again. It’s just fucking immense, intense and in your face. It’s exactly what all music should be in these difficult and worrying times. Thank you GNOD for leading the charge.

‘JUST SAY NO TO THE PSYCHO RIGHT-WING CAPITALIST FASCIST INDUSTRIAL DEATH MACHINE’ will be released 31 March via Rocket Records.