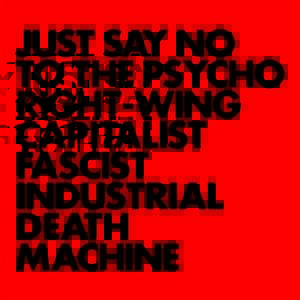 The mighty GNOD deliver one of the first politically charged albums of the year. Ioan Humphreys takes a listen.

It is an obviously politically charged album and preview track Bodies for Money is no exception. This has got to be the first of many angry and noisy releases from bands in these depressing, divisional times, surely.

The mighty GNOD are back with their fantastically named new album JUST SAY NO TO THE PSYCHO RIGHT-WING CAPITALIST FASCIST INDUSTRIAL DEATH MACHINE, which is released on 31 March 2017 on Rocket Records

Bodies for money is reviewed here. Second track People has a slow build up and the otherworldly noises and excerpts of recording of discussions create a palpable tension. Once the screams of “People!” and “time is running out for people” the song takes on mechanical preachy sound reminiscent of Throbbing Gristles’ brutal Discipline.

The noise and insistent guitar riff feed the pounding drums and lead into a cacophonic wall of sound, samples and electronica.

Paper error has a very in yer face riff that leads to more pounding drums, throbbing bass and a crushing wall of noise whilst occasionally screaming “paper error” over the squall.

Real man starts off quite slowly and amongst the samples has a really funky beat. Once the guitar stabs come in you are immediately reminded of the post punk grooves of Gang of Four and The Slits.

The funkiness doesn’t last long as the drums turn into machine gun drums over the chorus. There is a definite change of tempo three quarters of the way through and this leads to a more direct and brutal assault on all the senses.

Final track Stick In The Wheel has BIG bombastic drums which are high in the mix. There is some great production on this LP. The creeping guitar comes in and the vocals wail about “workers” and the brilliant refrain of “Don’t wanna be a cog in the machine. I wanna be a stick in the wheel”. Gorgeous stuff.

More noise and loud guitars flow over the track until it trails off for a second half of ambient noise which is VERY welcome after this relentless assault.

JUST SAY NO TO THE PSYCHO RIGHT-WING CAPITALIST FASCIST INDUSTRIAL DEATH MACHINE will be released 31 March via Rocket Records.