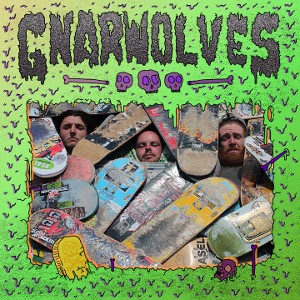 Gnarwolves are a band from Brighton I have heard a lot of hype about but never seen.  They’ve certainly been working hard to get themselves a name and have appeared on more flyers than most I have seen in recent years.  So this review is coming “blind” and to be honest this was not at all what I was expecting.  The name suggests some screamo hardcore outfit but that ain’t what you get at all.

From their website I see that they have “management” and booking agents so I guess the likelihood of me catching them at a DIY show may have passed.  They recently played Reading & Leeds festivals, having also featured on BBC Radio 1 and 6 so may be destined for bigger things. But is bigger always better? Not always and this (or quite plausibly the ethics) may be the reason they have stuck with a couple of independent labels to release this, their debut LP, which follows 3 earlier EPs.

Gnarwolves is (if you’re talking the release) or are (if you’re talking the band) what used to be called melodic hardcore.  They are clearly very U.S. inspired but gone native with no faux accent.  For this alone they earn some respect – California via Surbiton always sounds naff. Some down to earthness then….what you’d expect from a bunch of skaters!  To call this pop punk would do it a dis-service as this has plenty of punch.  The singy shouty vocals are strong  and work well with the rhythmic rock outs and breakdowns you’d expect from the likes of Avail.  There’s lots of chuggy riffs, a bit of dischordancy and they employ a little twang that on occasion makes the guitar strings sound like a washing line or piece of elastic.

The odd melodic heartflet angst bit in a song which is soon followed by a blast of hardcore takes me back to the work of I-spy and Propagandhi on the wonderful split 10″ they did back in the mid 90s.  And maybe even some of the later DC stuff like Soul Side.

Lyrically, as the band’s singer/guitarist Thom says, “the songs are snapshots of my own neurosis”.  Nothing new really in singing about your neuroses.  Teenagers (and those “post-teenagers” like me who refuse to properly grow up) have been suffering the same angst since they first invented themselves in the 1950s.  Long may it continue.  With titles like Smoking Kills, Bottle to Bottle and Hate Me (Don’t Stand Still) I guess this is music just right for the post-emo post-hardcore ever-so-misunderstood generation who hang around being polite and well dressed in vegan cupcake shops discussing their dissertation – rather than getting pissed and smashing up bus stops.  Yes, that’s right….hipsters!  The curse of the modern age.  Sorry chaps, it’s your audience, not you.

This release conjures up a busy room full of nodding heads and a crowd composed mainly of well trimmed beards, tattoos comprising flamboyant script of at least 15 words, flannel shirts (what used to be lumberjack shirts or just plain check shirts until we went all American) and sensible shoes.  It’s not a bad record – they’re good at what they do – but I would be hard pressed to pick this out from all the other bands treading this same path and if I’m in the mood for it, I’d probably head for the bands who did it before.  If this zeitgeist is your thang, you can pre-order the LP from this link.

Written by by Nathan Brown feeling like an old man at 4AM.  For more of his work for Louder Than War check out his author’s archive.