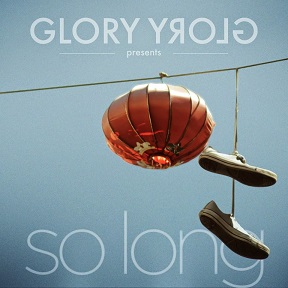 This is a lovely little thing if I ever heard one. Glory Glory present to us three tracks from three Canadians, each one worth of being the lead.

Opener Take My Time is fast paced and contains more key jumps and twists than an extreme jumpy-twisty thing. Funky guitar riffs and a chugging bassline accompany a lovely vocal which is beautifully layered, and Beach Boys style harmonies complete the choruses. It’s an instantly memorable melody which is different enough to please both the pop purist and the Indie seeker.

Sandwiched in the middle of the EP is Indigo Son which again contains some rather lovely vocals in a clean and effective production. A welcome guitar solo supplies backing towards the end of the track and the apparently Nile Rodgers inspired thang works a treat.

Perfectly mixed by the Grammy nominated Justin Gerrish (The Strokes, Muse, Vampire Weekend) each track shows why this EP has been three years in the making. Glory Glory write catchy dancy songs and are clearly ones for perfection. There’s not one blemish in sight and it’s probably that which is most significant, clean clinical noise is the order of the day.

Ending with Everybody Lies, another pop protégée, it’s easy to see an appeal to Glory Glory. Interestingly, all three tracks seem to be being promoted equally and it’s a completely valid move. They aren’t just another boy band, far from it as they exude a professionalism way beyond their young years. They’re simply a three lads making mighty fine music which everyone should take the time to enjoy.