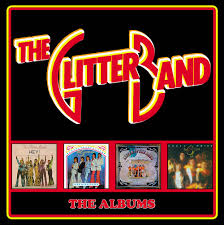 Boxset featuring the four albums put out by the Glitter Band in their halcyon days 73-76, including the hit singles “Angel Face” and “Goodbye My Love”….LTW’s Ian Canty nearly takes the lintel off a door frame because of those unfeasibly large platform boots…………

Despite being treated as more or less a stylised joke by most of the “serious” music media since its inauguration, Glam has been incredibly durable over the years. Revivals of the sounds and (less frequently) the styles of that time keep on resurfacing again and again: most recently with the Lemon Twigs just this year who I’ll leave you to draw your own conclusions about. They are a mite too premeditated for me I must confess, but if it keeps the Glam flag flying I can take it. Getting to the point, one of the key audio signifiers of Glam was of course double drum attack of the Glitter Band provided by Pete Phipps and Tony Leonard.

We’ll quickly deal with this right here: the Glitter Band have been unfairly maligned through association, but when they moved centre stage they managed many hit records in their own right that deserve your consideration. Originally known as the Boston Showband, they were bought into to back Gary Glitter at live performances after his first hits. They stepped out on their own when band leader John Rossall began badgering producer Mike Leander about the band releasing their own efforts. After having their first efforts rejected, the six piece scored a big hit with their next attempt “Angel Face” and on the back of that an album was quickly assembled. The band cut loose on their own, seemingly full of promise with a state of the art signature sound that was all the rage at discos up and down the country.

Having said this, all the first album “Hey” is a bit of a typical Glam Rock cash-in disc, stuffed full of old Rock n Roll covers and having the distinct feel of something knocked out quickly to satisfy the demand after the hit. In retrospect it looks daft that they weren’t given their own heads to compose more, because the few songs that they themselves contribute that managed to make it onto the LP are the highpoints. The ultra-basic “Just For You” followed in the footsteps of “Angel Face” both musically and into the charts and has a great ultra-basic breakdown in the middle which sums the whole period up in a mere couple of bars. The fans’ scarves probably hit the air with “I’m Celebrating”, which is slower and features prominent keyboard atop the euphoric, end of gig stomp. Bonus track “You Wouldn’t Leave Me Would You” (the flip of “Angel Face”) is strong and catchy, almost Proto-New Wave and would have improved the LP if it had been included instead of, say the rather lacklustre try at “Baby I Don’t Care”, possibly the only time their irrepressible energy doesn’t save some rather hackneyed material.

Talking of the covers, they do something quite surprising in feeding the Spencer Davis Group’s “Gimmie Some Loving” through the Glam machine then seguing it into a reprise of “Angel Face” and their cover of “Sealed With A Kiss” has an unexpected Soul bent to it. The rest of the record is pretty good and has their trademark “Glitterbeat” thump written through it like Blackpool Rock. Perhaps though it was a little on the “thin” side with regard to songs, which certainly made one wonder whether the band could sustain any sort of career on the evidence proffered? But even so “Hey” got in the top twenty of the album charts and was a good enough record if you recognise it was probably recorded on the hoof and on the cheap. It was purely simple, irresistible fun. But could they last? Soon however all doubts were to be cast aside, as the Glitter Band really took off on album number two.

It may have appeared judging from the debut that they were short on songs but nothing could have been further from the truth as the Glitter Band were back in less than a year with new LP “Rock N Roll Dudes”, which was entirely self-penned with each band member chipping in (though Rossall left towards the end of 1974 he contributes to three tracks here) and it was possibly their most satisfying collection too. Setting aside the rather embarrassing sleeve photo this record is no-holds barred Glam gold, but mindful of the fleeting trends is riveted together with strong songs rather than the 50s re-tread of most Glam pretenders’ efforts (including their previous offering). There is the feeling of, well not really maturity, more added confidence in their efforts.

“Goodbye My Love” was the cherry on the cake, a truly great single and possibly their defining moment, but there is plenty here of note besides. If say “Do You Remember” knocks everything good about their first LP into a three minute song, “I Can’t Stop” takes things a step further into Hard Rock territory and even the standard “slowie” number “Write Me a Letter” has the requisite bounce. Whether it is the boot-stomping/handclapping mayhem of “Bring Her Back” or the Quo-like “All My Love” they never let up and it’s all crowned by the full-on attitude of “Game’s Up” (also recorded by Hello, but I think the Glitter Band get the duke here through the sheer bloody-minded thud of their original). It’s a great LP and stands up well even today. The bonus tracks on this one are “Jukebox Queen” which is very 50s sounding, so much so it could almost be the Coasters and the clockwork tick of “Got To Get Ready For Love”, but the album itself is the jewel here.

Despite the success of “Rock N Roll Dudes” glam was pretty much a spent force though by the end of 1975, the jig appeared to be up for the Glitter Band and their parting shot to the era “Listen To The Band” is very much the sound of a band uneasily trying to move with the times. Almost totally abandoning their trademark sound, this album was the archetypal mid-70s Pop Rock record. It’s not so much that it is actually that bad, more that for much of the LP nothing really jumps out and grabs you. The Country-flecked/Funk amalgam “Watch The Show” and the almost break-neck pace of “Painted Lady” are probably the most arresting tracks presented here, though “Tears I Cried” has some “Goodbye My Love” magic about it and would have made a great single.

Though they scored a Top Five hit with “People Like And People Like Me” it was a far cry from their terrace rattling heyday, being a soft-toned MOR Pop song, not a bad one but a shock nonetheless to anyone hoping for something along the lines of their raucous best. That single set the tone for most of the LP, however “Dream Baby” goes back to their 50s Rocker roots and retains a little of that classic Glitterbeat. “Listen To The Band” is an interesting but disjointed record, inconsistent but diverting. The bonus tracks come into their own here with the simple but effective “Until Tomorrow” harking back to their recent past in winning style and the “Beach Boys go Glam” of “Love In The Sun” demonstrating great harmony vocals and is damned catchy to boot.

The album bombed in the UK and after the Folk Rock-tinged single “Don’t Make Promises” missed out on the charts as well, things looked grim for the one-time chart certainties. On this front, things would only get worse.

“Paris Match” was originally issued under the “G Band” name to distance themselves from their recent history and the fading Glam trend. Rumour has it that bassist/vocalist John Springate caught an early Sex Pistols gig and seeing which way the wind was blowing, knew it was the end for the Glitter Band under that name at least. Well I think this record came out in 1977 and it appears by the first side of the original record that they decided the way to salvation was through trying to be a bit like the Average White Band – an odd decision I think most would agree. There had already been a bit of a pointer with the very “Pick Up the Pieces” semi-instrumental “Tuna Biscuit”, a bonus track on disc three.

The vocal arrangements on this recordings are effective however and the “Jive Talkin'” cop “Lay Your Love On Me” could have made dancefloor waves. It wasn’t to be as the Disco boom bypassed the G Band and even the tough rocker “Almost American” couldn’t get them a sniff either side of the Atlantic. There are more attempts to woo the Disco/MOR and Rock scenes here, but not too many stand out. Oddly enough the whole thing ends with a credible enough stab at Reggae, “Move On Up” – definitely no worse than the Boomtown Rats or Police efforts at the very least. But in reality they were just throwing mud and seeing what might stick at this point in time and it was no surprise when they pulled up the stumps and jacked it in soon after.

On the face of it, this may well seem the usual story of a band burning themselves out after an initial burst of Glam fame, but actually they did attempt to move on the sound and certainly managed just that with that excellent second album which was streets ahead of the usual “get rich quick” grab-bag. This boxset gives the full picture of the Glitter Band’s four year run in the spotlight before Punk, which took much from their rabble-rousing sound, but also rendered them obsolete. Plenty of interesting bonus tracks, a nice clamshell box and excellent booklet (featuring notes by Phil Hendricks whose band the Stiffs used to do a nifty version of “Goodbye My Love” themselves!) add up to a treasure trove for anyone every entranced by that mighty Glitterbeat.