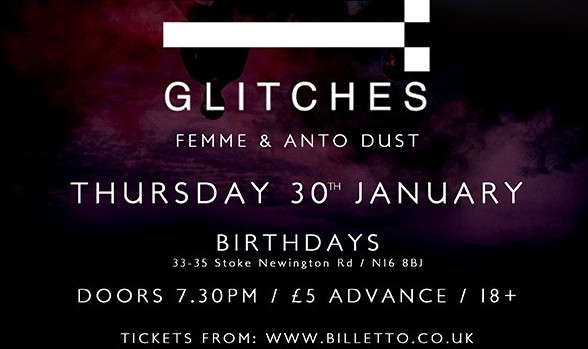 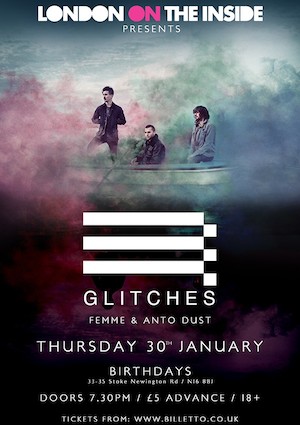 Glitches and Femme take their own brand of “Boogie with a suitcase Shoobie doobie do wop…” to Birthdays, London. Louder Than War’s Keith Goldhanger reviews.

A night of “Boogie with a suitcase Shoobie doobie do wop…” pop music wasn’t exactly what some of us had in mind on entering this tiny basement tonight. I’d have worn my platform shoes for a start and left my overcoat at home.

However …. Bright lights, synchronised dancers and wide grins are what we get with the occasional outbreak of hands in the air dancing by one or two enthusiastic punters at the front.

I’m not going to apologise for stating the bleedin’ obvious yet again, but the bleedin’ obvious needs repeating every now and then, because no matter how much people talk about, and invest time in, things like X Factor, Britain’s Got Talent (a fuckin’ DOG ! …) and The Voice and all the other nonsense that goes on in the living rooms of the UK (and the rest of the world) there are many reasons that need repeating as to why all these talent shows on UK TV suck.

Take Glitches, first seen by these eyes about a year ago in a South London pub and first heard on the wireless about the same time airing their debut single Only Time Will Tell.

Since then, I’ve been busy, they’ve been busy, the world carries on and then our paths cross again to the soundtrack of the glorious sounding RGB that has recently been responsible for causing our ears to itch when sitting next to the radio .

OK ….. So you can sing, you write you own songs, you form a band, you turn up in pubs to play the songs you’ve sweated over. You look cool, you sound cool, you find someone to make a video, you take that decision to try something out of your comfort zone, like dancing lessons. DANCING LESSONS !!! and make a video showing off what you learned in these lessons to compliment the ace tune you’ve written. You then wait patiently for people like us to turn up to dance, sing along and wonder why it is that we live in a world where the other option that some people take is to queue for ten hours in the rain outside the O2 arena (or equivalent) and hope that Simon fucking Cowell (if he can be arsed to turn up) decides to give you five minutes ahead of someone with a dead granny and a well known song that someone else wrote many years ago that we are all now just not impressed hearing yet again even with all the additional yelps and burps added to it.

That’s the main difference between what we do around here and what other people do.  Those who are look for an easy route to fame fortune and try not to think about that future career on a supermarket checkout when it all goes wrong (even that career path is going down the pan now). People are being encouraged to believe they can achieve something without really putting any fucking effort into it in the first place. You already know this, I know this, but the people sat eating pizza watching the telly and reading the newspapers – they don’t.

Anyway, there’s always rehab for those that really fuck it up, does Cowell actually think about that bit.

Television, the drug of the nation as the old saying goes.

Glitches are Robbie Parks (vocals), Michael O’ Neill (guitar) and James Warner (drums) – a three piece that remind some of us of 80s synth heroes Talk Talk. They look like the cool kids that don’t exist around East London that the rest of the media would like us to think actually exist on every corner. These are the people you may think walk around this area that look cool, dress cool, chew gum and swap limited editions of obscure dance 12″s that no one else will ever own (OK, maybe there are one or two but most of this area is populated by people riding bikes and skateboarding down this busy road late at night).

Glitches are one of those bands that write very good pop music. Robbie Parks sings a bit like Holly Johnson, and a bit like Boy George. He’ll wave his arms in the air as he belts out the songs and has a voice that you simply want more of the longer the gig continues.

Bands like this in small venues (probably a hundred crammed into this tiny room) are ace and should be seen. Everything including their press picture is cool. All it takes is a bit of time and a lot of effort, the right inspirations and some belief in what you do and a few great tunes. People will see you, like you, tell their friends and before you know it (depending on how good you actually are) you’ll have people knocking on the door and inviting you to far away places where the industry elves of the world gather. In Glitches’ case SXSW in Austin, Texas if you happen to be going there (and let’s face it, who isn’t going to SXSW?…er, yeah OK me for a start).

Glitches have tunes you’ll be dancing around rooms to one day and dancing around a field to whilst being nowhere near your telephone  paying eight quid on a Saturday night to vote for dross in order to listen to it again.

Support act, Femme are also fantastic and have pop tunes that are controlled by a bloke at the back of the stage, hitting buttons, pulling switches scratching records and he’s also looking too cool for school. Singer Laura Bettinson does all the right Britney/Madonna hand movements, looks at her audience in the eye, points, smiles, winks and dances and sings like we imagine Kylie might have sung like had some of us been lucky to have ever actually seen Kylie sing live. Laura doesn’t stand still for more than two seconds and employs a couple of dancers (with pom poms ! – yay!) whose synchronicity (arm movements, leg movements, eyes, eyebrows and mouthing the words) means this isn’t just made up on the spot.They even do that thing where they all stand behind one another and do that dance that makes it look as though Laura got about six arms –brilliant! This puts to shame many other singers of that same musical gender who we argue are well past their sell by date but are top of the list when it comes to being used as a good example of what these young Pop Idol/X Factor contestants should be looking up to.

Which is bollocks because in our little world in our little drinking establishments like Birthdays THIS is what people should be looking at and taking lessons from. These people on this stage tonight have, and are putting their shift in (and in the case of Femme front person Laura….big earrings). These people are making ace pop music and probably understand what makes the world rotate better than those people watching and taking part in these shows that even I can’t seem to ignore. (There are,after all many good people in this world who I’d like to think are also with us on this one. Maybe Radiohead producer Nigel Godrich who Laura has recently been holed up in a studio with?). I could compare this to GRIMES if I really wanted to justify why I can’t stop listening to this stuff but I won’t. This is the POP music that people should be hearing in their living rooms instead of the dross served up week after week (Christmas Top Of The Pops ?….bloody hell that was awful, and some people want that program back !! ) and lessons should be learned that in order to achieve then one has to make an effort.

The most notable difference between this and what we see on our telly’s are the original tunes we’re hearing, and these tunes are ace. Reinforcing to the youth (and not so youth) of today the notion that the ‘classic pop hits of yesteryear’ may need to passed from generation to generation may be a fab idea for those who actually think they know best and have publishing contracts to justify but frankly for us, that’s me and you … is also Bollocks.

We have a generation of people in this country making the best quality original music ever of all types and because of the technology we have to keep us the consumers happy and fulfilled we can get closer to that goal that some of us crave which is to avoid ever hearing Robbie fucking Williams EVER again.

So yeah …. this was good gig. Come with me next time so I have someone to dance with and don’t have to stand in a corner on my own whilst everyone wonders who the weird man in the overcoat is.

They need some fucking bubble machines though…people in pop need to know this.

Bubbles! Lots of them.

Got that pop pickers?

Put down your Black Flag albums for five minutes and gather the kids around the stereo and explain to them that out there in the real world, this sort of thing goes on and it’s a bit more real and credible that what goes on behind that box you keep staring at in the corner of your living room. And a much more satisfying night out than watching bands influenced by Slowdive.

All words by Keith Goldhanger whose Louder Than War archive can be found here.