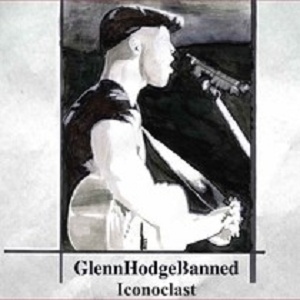 Here’s something exciting, and that’s not often said in music. It’s nothing revolutionary, but there’s an air around Glenn Hodge Banned that you should really be inhaling deep into your lungs. Another of those superb poets that seem to be springing up at the moment and pairing their words with some equally s exciting music.

Banned rather than Band, presumably because of the no holds barred’ lyrics and or just a play on words, looking like Matt Johnson and sounding like a cross between Billy Bragg and Billy Franks steams through a five track EP with a swaggering confidence.

Opening with Ignoramus and it’s take on the London commute, it’s relevant, it’s clever and it’s a cracking tune. Words roll out of Hodge’s mouth on an impressive lyrical conveyer belt and engrave an everlasting image on your inquisitive musical mind.

There’s an impressive backing band which serves to compliment Glenn, but to be fair it’s his anger and angst that shine through his inspiring lyrics. Like the aforementioned Bragg there’s an honesty and reality which isn’t really disguised at all and is easy to relate to.

Intrepid Thing has a violin or fiddle whispering along in the background as another life story unravels, and Wasted Labour, like the lead track manages to fit the word ‘buggery’ into its storyline as if it was a word that your Auntie Florence regularly said over tea and The Archers.

Glenn Hodge is a unique talent, and hopefully it will be recognised soon. Closers English Folk and C U Next Tuesday continue the exquisite line-up with a slightly slowed down pace sowing that he has more than one side to his art.

Hodge and his music is passion personified. Often thought provoking, often filled with anger and frustration, his talent is exciting to say the least.