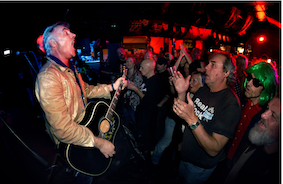 In its fifth year now Fat Tuesday, like its host town, is going from strength to strength.  (check the festival out here)

What was once a sleepy, decayed, seaside backwater is the best kept secret in the UK and has become the number one destination for the very southern drift of creative heads to the seaside (in the north people seem to run to the hills instead of the coast).

Based on the Mardi Gras and transposed to the south coast, Fat Tuesday is great event with almost a celebratory week of events, showcases and panels and lots of bands. There are whole days of new bands and then the final night becomes a Mardi Gras based celebration with a daytime march and then multi gigs in the town’s many venues.

Fast becoming one of the key showcase events in the Uk there are ambitious plans for the future and well worth keeping tabs on.

Headlining tonight is Glen Matlock, the dapper ex Pistol who has never rested on his laurel and remains out on the road as a ‘working musician’ as he likes to call himself. Fronting a four piece band, which also includes ex Sigue Sigue Sputnik guitar player Neal X on typically great shrapnel solos and Matlock on a strident acoustic guitar the band is kicking up a perfect old school storm that hooks back into that pre punk pub rock of Glen’s youth.

And this is not a bad thing.

In reality so called pub rock, at its best, was just great rock n roll played in pubs and the intensity and claustrophobia off good time rock n roll played in such an environment is still a deadly attractive proposition, especially when you have the history and nouse of Matlock at then helm.

Glen leads the band through Pistols classics like God Save The Queen and the climactic, set ending Pretty Vacant – a song which he wrote the words and music for and the room explodes into joy. In-between there are a collection of his own songs, singalong versions of Richard Hell’s Blank Generation and plenty of opportunity for Glen’s love of melody and adrenaline to shine and for his guitar player to really let rip with some of those great distinctive solos.

Sometimes its refreshing too see rock roll boiled down to its perfect bones and stripped of the bullshit. Music without the excess baggage surviving on its own terms. By being part of the Pistols, key part, Glen Matlock legend is assured and et he still craves the spit and sawdust and on night like this with a packed dancing room of acolytes there is a synchronicity and perfection about his band.

Lazy Bones are at the other end of the scale an ew young band from Brighton full of energy and ideas. They somehow collide a very heavy distorted bass sound with a fierce drummer with almost bubble gum pop embodies and its this collision that is very much part of the fascination with the band. On top of this potent mix are a great voice from the charismatic and energetic front woman as she sings with a cut glass purity that is needed for any kind of pop action but also with a raw and raucous scream that is cranked on adrenalin as she hits her keyboard proving the colour to the mighty rhythm section.

Not having a guitar leaves loads of space and the band are genuinely heavy and have the venerable old room at the seafront Carlisle -a great old school venue run by affable bikers and full of the local freaks and music heads, shuddering into the story night.

Lazy Bones are a new band in a rush, they are ready and they are captivating.