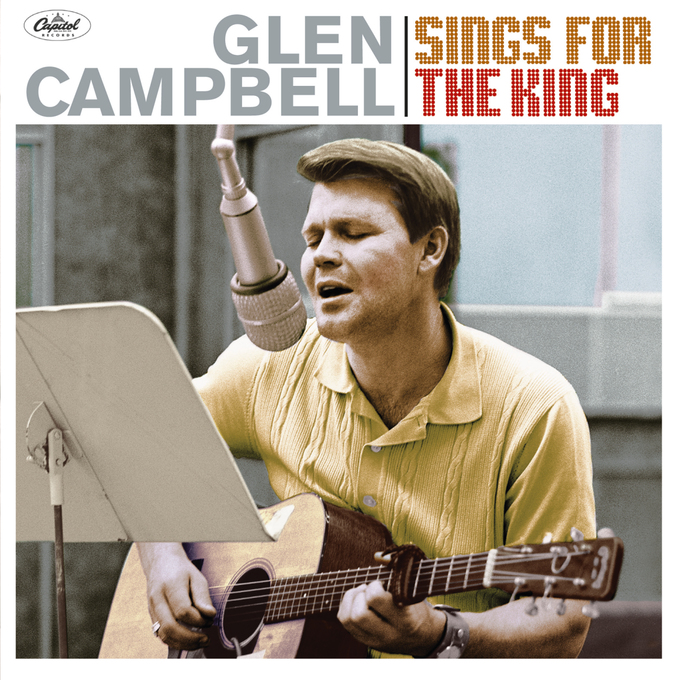 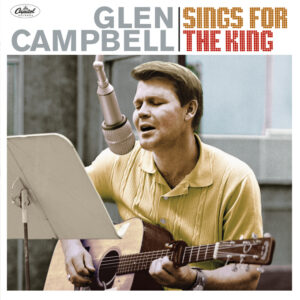 Glen Campbell Sings For The King

Of all the strings to Glen Campbell’s bow – singer, guitarist, songwriter, actor, TV host – one of the less well-known is his membership of the infamous group of LA session men known as The Wrecking Crew, playing on records by everyone from Frank Sinatra to Elvis Presley and The Beach Boys.

Now his least-known secret has been revealed more than half a century later: in between recording songs like Strangers In The Night and You’ve Lost That Lovin’ Feelin’, and filling in for Brian Wilson on a Beach Boys tour (and playing on Pet Sounds), Campbell recorded 20 songs as demos for Elvis Presley.

Now the songs Campbell sang for Presley – originally intended for his ears only – have been collected for the first time on one album, all of them sung by the man who would soon gain superstardom for his own singing and songwriting. His breakthrough hit Gentle On My Mind came in 1967, followed  by the timeless classics By The Time I Get To Phoenix, Wichita Lineman, GalvestonRhinestone Cowboy and Southern Nights.

The pair first met in 1956, at the height of Presley’s initial fame, when Elvis performed in Albuquerque where Campbell had moved to join his uncle’s band, Dick Bills and the Sandia Mountain Boys. They worked together on the 1964 film soundtrack Viva Las Vegas (ironically, the only time they recorded together) and remained friends for life, discovering they had a background in common: “Elvis and I were brought up the same humble way,” Campbell recalled later, “picking cotton and looking at the north end of a southbound mule.”

These 18 previously unheard and unreleased tracks – a dozen of them, including Clambake, Spinout and Stay Away Joe, demos that Presley went on to record and sing in his movies – demonstrate Campbell’s perfect pitch and five-octave vocal range, and his uncanny ability to match Presley’s key – and even to mimic his delivery – as well as his well-documented talent as a guitarist. But they are more than a posthumous footnote to the career of Campbell, who died last year: they stand up as an impressive album in their own right.

It opens with  We Call On Him, a gospel duet with Presley himself that gives perhaps the best sense of how Campbell’s performances prepared the song for Elvis to make his own. The album moves into more middle-of-the-road territory with Easy Come, Easy Go, recorded in 1966 for the film of that name when Presley’s career was in a slump following national service – and still two years away from his famous Comeback Special.

Other tracks include the country-flavoured standout Any Old Time, the rockier I’ll Be Back and the meaty ballad I’ll Never Know, while Glen begins to find what would become his trademark style on I Got Love, prior to a subtle shift of tone towards Presley’s unmistakeable vocal timbre.

Between 1965 and 1968 Campbell recorded 20 demos at night with songwriters Ben Weisman  and Sid Wayne, who hold the record for writing 57 songs for Presley. They improved their hopes of having their songs recorded by Presley – and his notorious manager Colonel Parker – by making full versions with lavish instrumental arrangements and vocals in his favoured key (by Campbell) so that they could envisage exactly how they would sound.

Musicians on the recordings included Phil Spector, Leon Russell, James Burton, Hal Blaine, Ronnie Tutt and Glen D.Hardin, many of whom would end up in Elvis’s touring band. The original recordings have been recovered and restored by Stephen Auerbach, the nephew of Weisman’s publisher, who discovered them on long-forgotten reel-to-reel tapes in a store-room in Los Angeles.

The album is available on limited edition 180-gram clear vinyl at https://store.glencampbell.com/