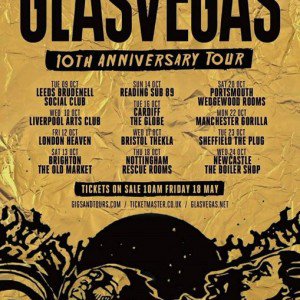 Glasvegas have been coaxed back into action and the gradual rolling thunder of this series of gigs is building as they deliver their much loved debut album to an audience that feels every note, sings every word and is locked into the band’s glacial sonic beauty. It makes for a special experience.

The Glasgow band are playing their debut album with an added intensity that underlines its magnificence. Time plays cruel tricks on memory and, like so many groups you sort of forget just how good they were. There is a lot of music out there and bands can easily fade into the background.

Tonight, though, was a startling reaffirmation and reminder of just how good Glasvegas were/are. There is a power that comes from the drums, a dive bombing melodic spine from the bass and those spectral ghostly guitars building into the very modern wall of sound and then there is James Allen’s vocals – full of that classic girl group drama or the endless skies of Ian McCulloch or that beauty of heartbreak that Glasgow has always done so well. They soar and capture the heartache and yearning and ghost rider beauty of being alive and in and out of love and the grit and grime of life and it’s soaring moments and they still sound enormous and fill the room. This is a voice that comes from deep within the soul and they sound even more urgent and spectacular after being given a second chance to break free.

Rock n roll is an unforgiving beast, crueler even than the world of football that James Allen was once involved in with a Scottish lower league career that included playing for clubs like the Blue Brazil – Cowdenbeath – in music so many fragile young dreamers have their moment of genius before being thrown to the rocks like broken dolls, battered by the cruel barbs of the business. Somehow, though, Glasvegas have been given a second chance and somehow they have returned sounding even more special, thrilling and full of the beautiful noise and melody than the first time.

I remember them being good but not this good. They have vamped up their tsunami of sound that seems to be one crescendo after another. In 2018 rules are there to be broken and bands don’t have to humbly hide in the shadows after their moment in the glare of the spotlight. Glasvegas are proof that that are new heights to be scaled and older songs can still crackle with an urgency. Daddy’s Gone sounds even more spooked and the scale of music and ambition is back. The audience sing along in disbelief that the band have returned and the sold out 450 packed venue feels like the kind of stadium the band’s songs will soon be filling.

Glasvegas had a big moment. Their eponymous debut album seemed to have set them up for the helter skelter ride to the top of the indie pile and then the wheels came off. There were follow up albums but they seemed to have lost their mojo and the moment. For sure there were great songs on the later albums but that avalanche of assured sound, that wall of melodic magnificence seemed not quite as focussed. This was followed by four years of silence, a crisis of confidence – in rock music being given the prize and having it taken away is, in many ways, crueller than never having the prize at all.

It seemed they would become a footnote. A footnote to a magnificent moment of course but a footnote none the less but then fellow Glaswegian and original champion of the band Alan McGee stepped back into the fold and did another one of his repair jobs. Standing at the back of the venue tonight he is dancing around with his hands in the air filming the gig like just another fan. I ask him just what this magic dust that he applies to these bands is and he cackles that manic laugh and tells me he just tells them to play their big album. It’s sort of true but what he really does is finds these broken down older music vehicles and and empowers them again. It’s that kind of empowerment that is so vital in youth but is even more vital ten years later and has been life changing for Glasvegas.

You can sense it as James humbly thanks the audience as he blinks in disbelief at just how powerful their devotion is. He stands in the middle of the melodic maelstrom lost in the music and the songs and then opens his eyes and the whole room is singing them back like they mean as much to them as they do to him. It’s emotional this kind of devotion and it’s earned. In a weird way Glasvegas sound even more of the now than they did then. There is rumours of demos of new songs and a potential new album.

Finally, the band are ready to follow up that classic debut.