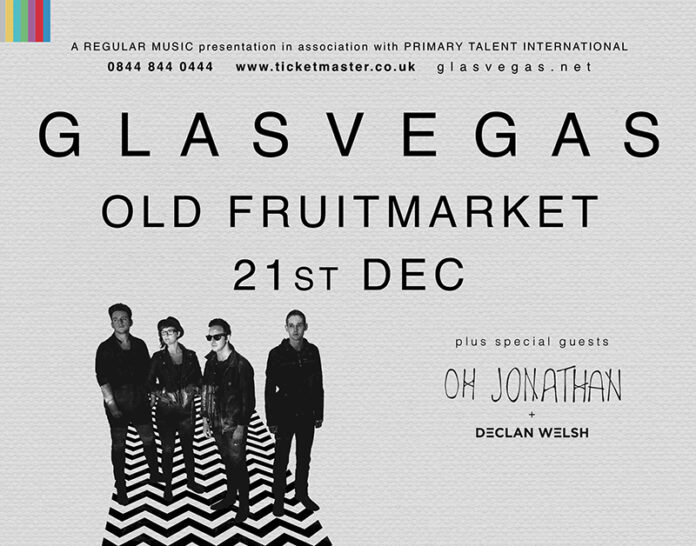 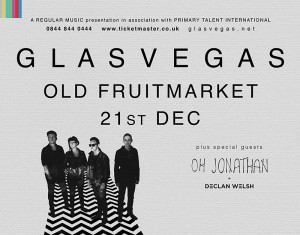 Glasvegas wrap a busy year up with a “homecoming” show at The Old Fruit Market. Harry Mulligan reports back from a triumphant night.

There was a distinct Christmas ambience around and inside The Old Fruit Market, Glasgow, on December 22nd, as Glasvegas put an exclamation point at the end of their year. They’ve been pell mell since the turn of the year, undertaking two sold out European tours and an unprecedented ninth headline tour of North America. This culminated with an appearance on The Late Late Late Show with American-Scots comedian Craig Ferguson hosting on CBS for a second time.

Not bad for Our Lads from Dalmarnock, and one Swedish tub thumper…

Declan Welsh warmed the crowd up with his distinctly weedgie aesthetic, demonstrating that he was not only in possession of some good banter, but was a braw chanter into the bargain. His pop sensibility, combined with an easy way with an audience make him one to look out for in 2015. I’ll Never Leave This Place, with hindsight, enormously resonated with the crowd, and was made doubly pertinent in light of the tragedy that occurred the following day when a refuse collection van mounted the pavement outside Queens Street Station killing six.

Before Glasvegas came on, during an a capella set by friends of drummer Jonna Lofgren, I asked a random member of the audience what he liked about Glasvegas, and this is what he said:

“They don’t give a Fuck! They give you a Rock n Roll Show! They’ve been through the ringer. James has been through the ringer. The guy is a ‘kin Nut Job! But, he gives you a Show every time. I’ve seen ‘im umpteen times and he gives you a Rock n Roll Show. When he’s in his home town, he gives it every time. I’ve seen them thirteen times, Classic Grand, King Tuts, The Garage. I hope he’s wearing Black, that’s a good sign straight away. Once he wears that white shite, we’re in trouble! One of the greatest songs in the last ten years and that’s Geraldine! Hundred and ten percent Scottish song. Every time I see a social worker, I wonder what her name is. Fuck you it’s over – as well, that another one of my favorites. It’s the Glasgow Rangers theme song, you know ha. As long as I get those two, I’m a Happy Camper.”

The band opened with Magazine and quickly followed with the aforementioned Fuck You and Flowers and Football Tops. These are songs that are pregnant with emotion and proved to be some sort of collective premonition that was occurring – of the tragic events of the following day, not to mention a look back at the Clutha tragedy of the previous Christmas. You’ve got to love the people of Glasgow! It really is One Big Family.

Someone threw a pink glittery bowler hat onstage, hoping James Allan would don it: No Chance! Ever the one for a bit of gel on his barnet, he was having none of it. “I canny, I’ve put some gel in earlier!” he protested good-humouredly. The exchange was protracted, and represented an ongoing dialogue between Glasvegas and the denizens of this place.

Please Come Back Home, I Feel Wrong, Secret Truth and Euphoria were played in succession and showcased Jonna’s lively kinaesthetic drumming style, and what is now the signature guitar sound of Rab and James Allan. I still get images of Paul on bass wearing enormous novelty spectacles from 2008 when they played a series of shows for me as an unsigned act at VICE & MULLIGAN PRESENTS nights in London. I felt proud and nostalgic that they have become such a muscled live entity, no-longer really a work-in-progress. This was the Glasvegas in a state of actualization as a band. Like The Jesus and Mary Chain, they have arrived.

Cheating Heart, Whatever Hurts followed before Snowflake was played in its festive entirety. Geraldine evoked an excited uproar from the audience who reminded me of the Celtic Boys Choir in The Jungle at Celtic Park.

Daddy’s Gone was too close to home, and holds such a visceral punch that I have to collect myself off the floor every time I hear it. James tacitly dedicated the concert to his Wee Mammy which absolutely made the night for me. “She’s here!” he told the crowd, obviously chuffed to bits. Very endearing to say the least.

Ice Cream Van, and Go Square Go brought the set but not the performance to an end. When they returned, Rab previewed the future as he made a foray onto keyboards, augmenting his repertoire in Glasshouse, a new tune about the world of a prostitute on the streets of Glasgow. Whatever anyone says about the ‘Vegas, they are to be applauded for Keeping It Real, and not being afraid of grasping the nettle when it comes to social issues. James Allan cannot be faulted for caring about these issues.

Shine Like Stars and Lots Sometimes brought the show to an end, and we all left having made this Christmas a good one, at least musically…

All words by Harry Mulligan. More from Harry can be found at his Louder Than War Author Archive.