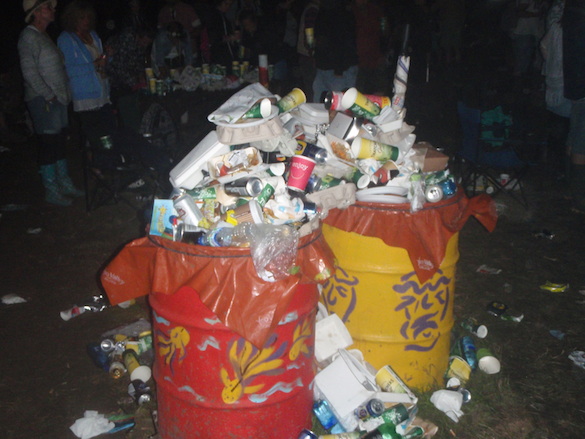 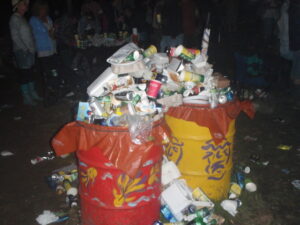 Dolly Day …. because when we get home everyone will ask us if we saw Dolly Parton before telling us they saw some mud on the telly and try to start a conversation about miming. MIMING !! we were four fuckin’ miles away up a hill we don’t fuckin care if she was miming, we’re not here to care about such behaviour. She wore white and spoke in a very strong American accent. We knew some of the words and we were there OK !! is that not enough ?

It’s also Josh Record day, our first port of call where we eat breakfast, meet strangers, drink more cider and watch Josh struggle through a set containing two power cuts before deciding after the third to “just come and meet me over there and we’ll have a chat”.

Josh has a new album out, I want one, I’ll get one and I want to see him play again and for you to all come with me. I’ll tell you more about him one day.

Considering Ms Parton’s strict working regime you’d have thought that The 1975 would step aside in order that the country singer could put her shift in without claiming overtime. It’s twenty past four and something tells us there’ll be trouble if she’s still here in forty minutes. We sat at the back and swooned at the site of tens of thousands standing around, very drunk with glasses (plastic ones, and I’m including cans and hip flasks here by the way) raised, singing along joyously. Not since those heady days since…er 2013 when The Rolling Stones were present has this field been so rammed and surrounded by the sound of this amount of people singing along in unison.

Dolly is now another artist for us to tick off alongside, Cash, Jones, Stevens, Williams, Quo and Bassey on the list of greats who have turned up on the pyramid stage over the years and shone. Well perhaps not Quo and Shakey, they really were shit (but it was worth seeing Shakey for the amount of green doors brought into the mosh pit that day).

The Horrors on The Other Stage were ace.

Ace because of the Frankie Knuckles, Your Love cover. Ace because most of their latest album Luminous got aired and ace because the best bits from Skying were also thrust upon us as we splashed our way across a very wet field to look for more chips, and somewhere to sit down for five minutes (both easily accomplished). 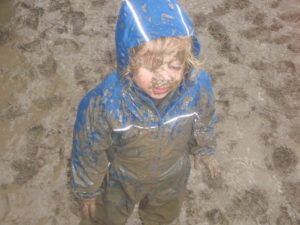 If there’s one band that we fell in love with over the weekend its Family Of The Year. Having only realised they were playing earlier in the day and walking around humming that great tune Hero it was time to get excited. Very excited. This is a tune we’ll all know all the words to in a few months time. The rest of this planet are already ahead of us in regards to this outfit and today this lot shone as bright as the early evening sun.

We’re reminded slightly of Group Love (where were they this year?) or even The Magic Numbers (where were they this year?) and feel that those who stood and watched Arcade Fire could have (and probably were doing) worse that watch this band. Their indie-folk tunes also remind us of the cheery tunes we’ve heard by Fleetwood Mac (where were they this year?) as they pumped out tunes from their melodic alt-rock two albums. (More than one !! – where have they been all my life?) Maybe it’s the dual male /female vocals with the catchy choruses that warm our hearts as the sun disappears slowly that grab the attention of passes by or maybe it’s the thought that actually…..some of us can’t be arsed to watch any more bands after these because there’s big bits of the map in our pockets we haven’t seen yet and Jagwar Ma that we have seen a few too many times recently and are an easy sacrifice to make.

So the Australian’s were missed because some of us want to go to the circus and visit the bits of the site where aircraft cockpits are carefully positioned for people to sit in, eat their dinner, talk rubbish to the people next to them or simply dance around. We witness a couple of marvellous gentlemen who ….well just watch this …

The circus field is always a delight to visit even if it’s just the once. Guaranteed top class entertainment that comes to you whilst you’re least expecting it. Like Jerry Hart the Frank Sinatra looking geezer who’s audience consists of one over enthusiastic five year old splashing in the mud or the nonchalant dodgy geezer character trying to sell “Kasabian hospitality tickets” to passers by just like the similar looking chaps that hang around outside Brixton Tube station on the evening of a big gig.

We saw a New York Jazz band, probably called the New York Jazz band who were probably all from New York and in case you were wondering where all the words are to describe (“was that Danny Dyer?”) Kasabian…well, this is where some of us went instead.

I’m not sure how it happened but I did remarkably get to see Kasabian play Fire. Unless my camera was stolen and swiftly replaced then I definitely was there. They’ve gone a long way over the years and even though the promising early shows were very delightful experiences we didn’t really expect their day to arrive ….. it was good y’know ….. I’m glad I allowed myself that little bit of them. I walked away without caring after 4 minutes but they were great. 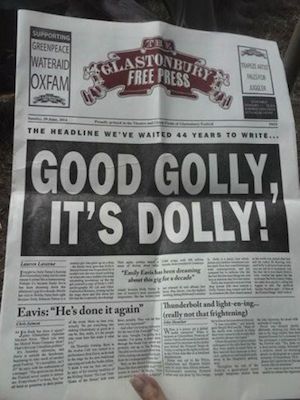 So that was Glastonbury.

Full of cool creative groups of people being at the prime of their artistic lives.

Unlike all those failed English sportsmen on the aeroplane returning from Brazil who don’t know what it’s like to physically go hungry because they can’t afford a pie from a service station as they sit for hours in a ropey old van to go and perform what they love doing week in and week out. Imagine if those footballers were actually as committed as the people we saw this weekend on stages around us and had to struggle to keep a roof over their heads instead of arsing around in Nando’s on their days off and sleeping with their mates missuses.

Some of us hate ourselves for watching too much football but at the same time watch even more musical outfits than we can fit into a weekend and wish we could find the time and energy to witness even more than we actually do.

And those bastards get paid fuckin millions to do that whilst the country is still littered with more musical talent then you can shake a muddy stick at.

Here’s a fabulous piece of footage of Too Many T’s arsing around in a taxi during the weekend.

These boys live in the same country as those blokes running around in Brazil. Remember them? They’re the ones who couldn’t even win a game and are now lounging around in highly expensive hotel swimming pools smoking fags waiting for the new season to start

….. this sort of stuff doesn’t get thrown together in a three hour training session and they don’t get paid thousands to provide us with such entertainment.

This is why you’re reading this blog and not a football one I suspect.

The film of My Personal highlights of Glastonbury 2014 may just take until the end of the year to get together.

Have a nice holiday wherever you go, that was ours x

Bands and performers mentioned in this review can be found on the following social media: Dolly Parton, Josh Record, The 1975, The Horrors, Family Of The Year, Too Many T’s