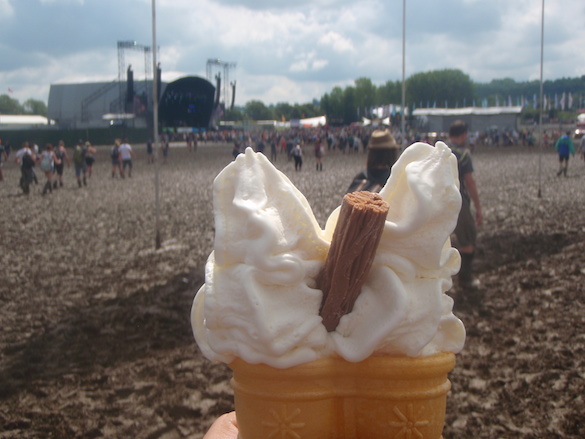 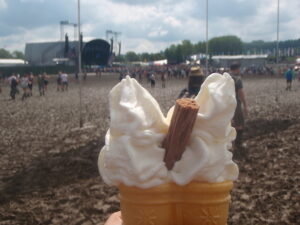 Part III of Keith Goldhanger’s Overview Of The Festival.

Saturday, the big one …..A day that begins with a few hours watching very rubbish bands.

It happens, but arguably it shouldn’t.

Searching out something new isn’t always as successful as you’d like it to be and if a golden nugget does get unearthed then wandering off can actually be worthwhile. Some bands that can keep you entertained for a couple of albums can be found this way.

All is not well but we know it’ll get better.

Its heart warming knowing that we’re not just living off the fumes generated by everyone else’s adrenalin, enjoyment and cigarette smoke and it keeps us prepared for when the good stuff starts kicking off. It keeps everything in perspective. Today will start at 15.00hrs which is the allotted time that our favourites The Fat White Family will be gracing the John Peel stage.

This is covered in a little more detail here  but before that though we do get to see, well listen to Royal Blood, the duo that according to my mate “Big Pete” who knows such things make all that racket thanks to “3 octave pedals, 2 guitar amps and a bass amp, and a switching unit which changes the routing to get several different sounds….” and (according to others) the odd Queens Of The Stoneage album. We stand outside the Peel tent and witness thousands between us and the stage and remind ourselves that not too long ago we stood at the Camden Barfly stroking our chins and not being impressed in the same way that others have since been impressed and then ended up proving us wrong and themselves right months later (ditto Drenge).

The sun comes out in the fiercest way possible and we wander through the mud to have a look at Lana Del Rey who arrives in her dress of many colours and our umbrellas are out again. Not to keep us dry but to keep us from burning like toast.

It’s a dreary old set, no arms in the air and singing along in this field this afternoon, we’ve seen her now and I’m sure it was all rather pleasant but it literally sent one punter to sleep which is why the only bit remembered is the bit when the the Scottish fellows in close proximity decided to all sing very badly along with that song that goes …..

in between verses of incomprehensible muttering.

Not the best way to wake up from an afternoon snooze ….. or maybe it was? 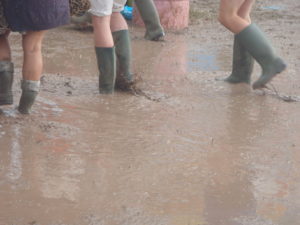 The rain reappears and therefore the Williams Green stage a few fields away is rammed for an equally unimpressive beat combo we can’t even be bothered to look up before noticing that the bar next door is SHOWING THE BLOODY FOOTBALL !!!!

Personally I think the last time I saw all of the World Cup was about 1978 because this second favourite thing in the world always clashes with the best thing in the world. Brazil winning a penalty shoot out is all we see before snuggling back into the Williams Green tent for the utterly fantastic Fujiya & Miyagi who begin by muttering over and over again those immortal words …..

This turns out to be one of the highlights of the weekend. Can, Stereolab and Wire comparisons with a backing electronic throb simular to our favourites Factory Floor strike up and keep the dancing hoards moving and grooving and some of us wonder why it’s taken this long to witness this super dance combo live. A truly great gig that someone around here needs to investigate further.

Imagine Dragons is the sort of name for a band most would dismiss before the first rehearsal however we go to have a peep to see what the fuss is about. The fuss, is basically a band that have every major hands in the air mass sing along chorus (that most of us don’t know the words to) written into every four minute clapalong tune they own. It’s one thing having the odd crowd pleaser but this lot seem to have the lot in abundance, maybe too much. They’re covered in mud and are very popular with the big crowd who are still recovering from an earlier downpour and lapping up everything thrown at them. It has far too much drumming and they sound a bit like Eliza And The Bear who they recently took on tour with them. Some of us only allow one band like this in their lives and as we’ve missed them playing at the Lexington in front of twelve people there may be little chance of seeing these again unless we fork out tens of pounds to stand in a big shed with thousands of others.

Which some of us don’t really consider doing when there’s less expensive and more intimate gigs to attend.

Saturday night then …. too many choices. Take away the option of a two hour long Dexy‘s show and we can see the trees. Anna Calvi plays us what she knows on her guitar and sings, howls and whispers the tunes we all know and love but we’re really here holding onto our positions for John Grant. How could we not see this “greatest motherfucker” at Glastonbury, in the rain we don’t notice and at one of the best stages in regards to vantage points at the festival?

One moment we’re swooning to laid back powerful bare boned ballads (in daylight) and before we can get distracted by the bar we find ourselves dancing like we’re watching underworld and losing ourselves in an array of flashing lights and techno beats in a dark field.

After a very long walk we get the last forty minutes of Dexy’s who are in the final stages of their show. A show including the hit we never thought we were going to get in the form of the unexpected Come On Eileen. However we didn’t get Jackie Wilson Says which was of some disappointment to those chanting the intro at every opportunity during the short spell we were there.

Tonight’s options were overwhelming. MGMT got swerved as it was happening too near our bed space. Dan Le Sac vs Scroobius Pip would have been seen had the walk to Dexy’s not been distracted by a magician called “Ozmoses” doing rather impressive card tricks, Toy were pounding away but unfortunately ignored as we walked past, Mogwai we just walked away from, Fatboy Slim we’d seen so many times before (wish he’d been on later, maybe he was) and Metallica, Jake Bugg and Brian Ferry were never under starters orders when we got up today. Goldfrapp we simply forgot about. We could have just sat down on one of those mountains of steaming wood chippings (why was there steam coming from them anyone?) as we had earlier, chatting to strangers to a background noise of the BBC Radiophonic Orchestra performing the bit of their set we didn’t hang around for in Liverpool recently, which included the Doctor Who theme tune or we could have sat in a puddle dribbling and screaming for our mothers.

Two thousand people shuffling around not making much noise until …..

Yes, that song, and a song that continues all the way to the toilets in the next field where headphone wearing punters queue up still in range of the DJ and all start to sing “Taaaaaaaaaake oooooon me ..”. A strange experience for those walking in from the opposite direction, groups of people wearing headphones with flashing lights and all singing incoherantly to A-Ha but isn’t everything by now a little odd?

Time for a roast dinner and a pint of spicy cider before bed.

If we can remember which field that was in.