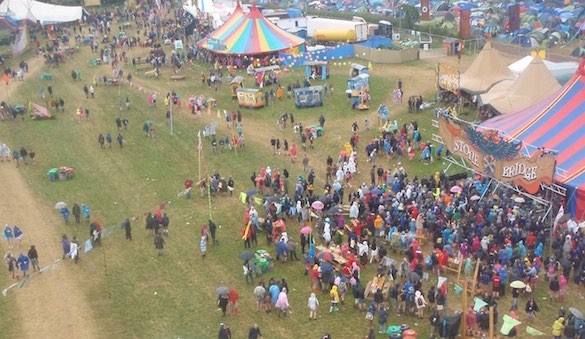 This year we had two reviewers at Glastonbury, John, of course, and Keith Goldhanger who starts his reflections by having a go at the anti-glasters brigade before knuckling down to writing about bands he saw on Weds and Thursday.

Here we go again then.

Wellies, waterproofs, enough money to go to the moon and back and a pre-planned schedule that we conclude after four days (or was it five days?) went swimmingly well. Early weather forecasts are bad, but we’d rather be going knowing it’s going to chuck it down than stay at home feeling ten times as shit that we’re not there whilst watching it on the telly to see if there’s any tiny indication that the place sucks.

It sucks apparently because those that have been beaten by the event tell us every year it sucks. There are places in Spain and the Caribbean that suck I suspect, but when someone tells us they’re going we usually wish them well, look forward to seeing their tan and wave them off.

Glastonbury is different though. Everyone has seen it on the telly or have been there when it chucked it down, got blisters, got robbed and missed T-Rex, or the Levellers and the absentees (as if we care) don’t seem to like it much. Those that do care are already in the queue for next year.

The permanent stay-aways either ask us where we wash and how we wash, tell us it’s always muddy (it isn’t) and worry about our bowel movements. The temporary absentees just tell us it’s not as good as it used to be because they feel their opinion on Glastonbury has to be aired towards those of us that shell out all the money to go.

“Have a nice holiday …Where do you wash? What are the toilets like? … hope your fuckin’ plane crashes…”

We don’t say yet, but that’s what we hear from other people in response to when we tell them we’re going to Glastonbury.

For those who haven’t been to this festival let me describe it.

It’s basically one big field with a couple of burger stalls, six hour queues for the bogs and Kasabian playing at one end. We all stand in one spot for five days and only return to our tents when everything is switched off after the main headline band, but can’t sleep because of all the high-pitched posh voices looking for Tarquin who was last seen at the food stall selling Gluten free sweet crepes and savoury buckwheat galettes and could possibly be vomiting due to the combination of what he bought there and the bottle of 1997 vilmart & cie that was carefully stashed away in his 1960 VW Split screen campervan (that he has a name for like Beatrice, or Susie…)

Match the above paragraph with the footage you probably watched on the TV this weekend of a woman wearing wellingtons standing in a puddle and you’ll learn about disinformation.

Want to know what it’s really like? Come along next year or ask one of your mates who was here next time you’re down the pub and you’ll still be listening at closing time.

If you haven’t been for years you wouldn’t like it anymore as I’m sure you spent the weekend telling everyone about whilst you washed down your warm lager in your warm pub and went home to watch Metallica on the telly whilst continuing to complain about the hypocritical idea of them being here.

You would have therefore seen more of this band than I ever have.

Oh no, Glastonbury’s not what it used to be, it was much better when people were being mugged, shot and robbed at knifepoint in the middle of the night. It was much better when people built bonfires about six inches from where your weary head lay inside your rickety tent and oh, don’t we miss those ten hour queues to get in and two days to get out? In those days a few years ago when it rained a little, the puddles remained where they were produced and lorry loads of wood chippings had not been discovered yet to be used as the path repair material that we all know and love today. It’s tough not taking for granted all the stuff that goes on, in and around the site during the weekend as the rest of us dance, drink and wave our arms in the air. The tractor drivers that throw the chippings around to help us walk around and the litter picking that goes on unnoticed and the arrival of the bands spot on time as scheduled in our free guide that comes with our free program that we carry around in our free bag that also holds some of the beer that we have bought in ourselves without any problem from the unnoticeable security around the site that are either sleeping standing up or dancing in unison to whatever it is they’re meant to be attending whilst making their presence felt in front of not only our favourite but their favourite bands as everyone literally has the time of their lives.

Glastonbury also gives us the chance to wear all those odd socks we’ve been stashing away over the year because we’d rather throw the one with the hole in away rather than both.

We spend two days walking around and getting reacquainted with the city some of us are lucky enough to visit almost every year now and on Thursday evening we wander into the Silver Hayes area (basically what was called at one time the Dance village) and get drawn in by the racket we’re hearing inside one of the tents. It’s half of Hot Chip and a bloke or two from LCD Soundsystem playing one of their first gigs together in front of a very large audience. They’re called NEW BUILD and they introduce us to the first of many magical moments of the forthcoming weekend with their laid-back electronic tunes. 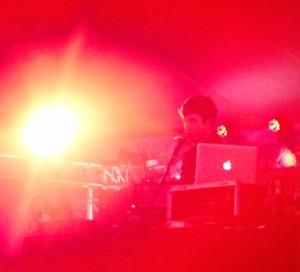 EAST INDIA YOUTH is up next. William Doyle to him mum, has a stinker. Leads falling out, things stop working, we witness about five false starts, but we’re in a tent heaving with people there to see him and then sing very badly along with “Heaven, who knows”. The hour upon us does at least succeed in allowing one person to do what he’s wanted to do since stumbling on him in a tiny basement in Dalston last year. That is to sing very badly along with everyone else singing along very badly to his songs with arms in the air, raised hip flask and actually feeling sorry for the guy whilst he struggles to get through this. Tomorrow, we’ll discover as we walk away from Anne Robinson look-a-like BLONDIE, that East India Youth is playing again at the WILLIAMS GREEN stage and pulling out his finest show we’ve ever seen.

MR B THE GENTLEMAN RHYMER has us walking three miles across about seven fields and has us asking if this is the term of measurement we should judge all bands on. Kaiser Chiefs = wouldn’t get of bed for / Mr B the Gentleman Rhymer, posh English eccentric hip hop artist with a banjo sometimes playing the odd cover version of an indy classic = as already discussed.

DEXYS “Nowhere Is Home” film ends the Thursday night shenanigans and it’s now with a heavier heart that the “One Day I’m Going To Soar” Show on Saturday night may possible get swerved unless a we partake in a brisk forty minute walk that may have to be taken up in order to catch the end. Looking ahead there are simply too many other options available.

But we’ll worry about that in a couple of days time.

This film is set around the very brilliant show that Dexy’s have put on around the country over the past couple of years. Kevin Rowland narrating around various snippets of tunes from the show. Tunes that have taken over 25 years to compile into this project and a set of songs worth waiting for and songs that have opened this writer’s eyes and ears until they pop out of their head. There’s a basic explanation that warms the two ears either side of the face where Kevin explains that they’re not going to get involved in any ’80s revival gang and that this is simply a new project. Hoo .. bloody … rah I say and wish others (no names) would take note. This being typed by a man that never really enjoyed or gave time for the Midnight Runners version of Dexy’s. Brilliant film, brilliant band, brilliant show that goes on for so many hours that the decision to miss the actual show on Saturday night will not be taken lightly.

I’ve no idea what happened after that … a bonfire and some fireworks that went on for hours I believe … I went to bed thinking we only now have only the whole of the Glastonbury festival to go and it’s probably raining cats and dogs outside our tiny tents, but some of us haven’t slept for a couple of days.

We don’t care, we’re in a field, one of many special fields that surround us that are going to host many of our favourite acts and sell us some of our favourite food. Some of us are already close to ruin. But you can’t buy adrenalin, it gets saved up over the years, this is our five day cup final with lots of goals, a lot of cheering and screaming, a lot of chatting to complete strangers even if it’s just to suggest what we’ve just witnessed may have been the best thing ever.

Other people make this happen. We just forget all our troubles and party for a week.

And we don’t have to rely on bloody Easy Jet to get us here and back.