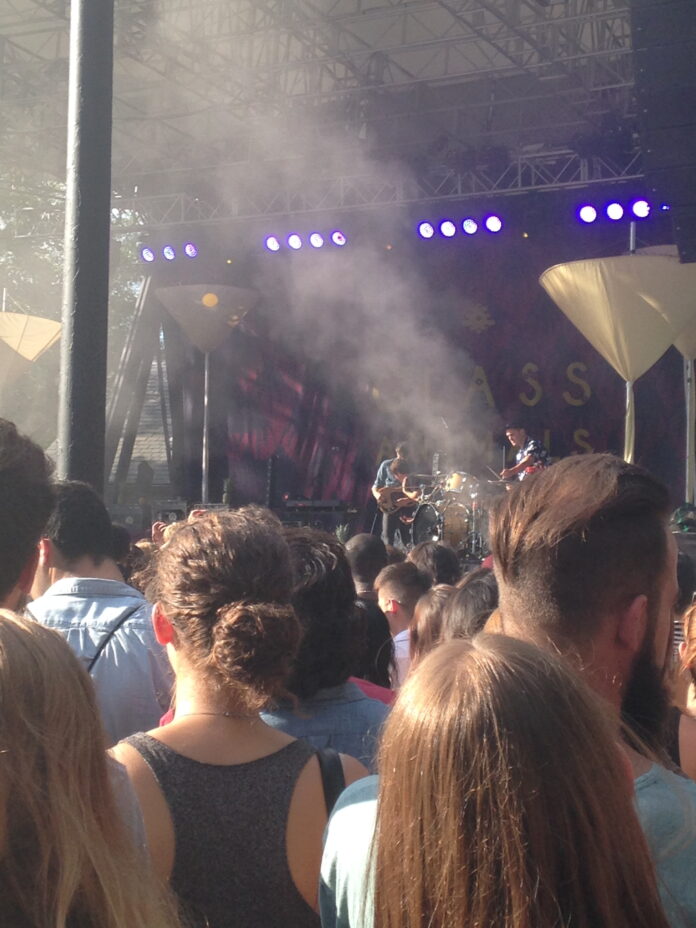 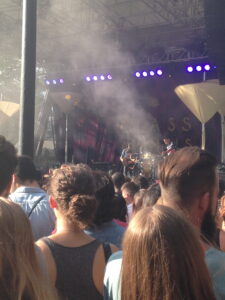 Stuck in a heatwave that is refusing to die, New York welcomed Oxford’s Glass Animals to their manor. On call was Clive K Hammond who witnessed the next steps in the quartet’s rise to world dominance.

Since first encountering alternative pop quartet Glass Animals a little over a year ago, their metamorphosis from chilling subterranean synthpop to headline electronic trendsetters has been staggering.

Glass Animals join the likes of Chet Faker and St Lucia when it comes to combining cooled, bursts of sun-kissed electro and mould it within a tribal air of rhythmic complexity. Their melodies are a constant source of intrigue and become ingrained so thoroughly through the subconscious, they are instantly memorable. This group from Oxford – who much like their hometown brothers Radiohead enjoy diverting the attention occasionally from the crushing narratives by countering them with an array pop laced hooks – have come along way since that chance meeting in Manchester.

Today they stand in front of a full house at Central Park’s Summerstage.

The premise for the Summerstage series is to offer underground, innovative acts a free podium upon which to play out their sound. It doesn’t matter who, what or where they come from. If it’s fresh New York wants it. The line-up during this Sunday’s spectacle remained steadfast to this philosophy.

After an intense series of routines from American dance outfit BattleFest League Dancers – a group of dancers who push the limits of extreme street dancing to the very limits of the imagination, the rate upon which their bodies moved in time with the frantic tracks below it was inspired – Brooklyn’s Taylor McFerrin took to the stage.

Oldest son of iconic beatbox come pop performer Bobby, McFerrin has become as renowned around these parts for his instinctive live performances – that combine presenting a song live on stage before sharply readjusting the underlying tracks in an impromptu remix – as his father was for ‘Don’t Worry, Be Happy’. The depth of his darkened post-dubstep sound was magnetic; wave upon wave of simmering analogue sequences would push McFerrin to manipulate the groove and his vocals to allow his audience new space to gyrate through. His beatboxing too was impressive; as an art in itself it’s a compelling, but as McFerrin drew the spitting faster and allowed his backing drummer to slowly integrate himself, the rising synth that exploded through exposed exactly why New Yorkers have become so besotted with him.

The stage – set within the towering surroundings of the world’s most idyllic film locations – allows the usual humdrum of wannabe hipsters, intrigued tourists and resolute fans of all things undeground to pass through at will; this under normal circumstances. With Glass Animals around, the perimetre for the show is locked up well before show time.

‘Black Mambo’ – a crisp piece of world music that harnesses beautiful off-beat guitar passages and one of their debut ‘Zaba’s most hypnotic melodies, the track continues Glass Animals’ constant yearn for warm padding and exploration – and ‘Hazey’ – beginnings that remind the listener of an old school NES sound effect catalogue but becomes a spacious, heated affair with vocal melodies drizzling across, producing in effect a distant rainbow of tranquility – underpinned the sweaty atmosphere that would become routine.

Before long ‘Gooey’ was released. Their finest pop number, ‘Gooey’ is an archetypal summer song. Slow rise, immediate fall. Repeat, repeat, repeat. There is something for everyone in this compulsive hit.

Much like Hot Chip’s performance at Webster Hall last week, Glass Animals have an acute awareness of their surroundings. They understand the history; the glamour; the culture. Their cover of Yeah Yeah Yeah’s ‘Gold Lion’ – a much progressed rendition than most would have expected, the track was stripped to its skeleton and rebuilt through softer, slowed grooves – and Kanye West’s ‘Love Lockdown’ vivaciously responded to by their new American friends.

“I smile because I want to, you smile because you want to,” etched itself throughout ‘Pools’ – another summer drenched alternative anthem, that bodied itself with a discerningly infectious dotted guitar and euphoric chorus. And as the parade of sultry admirers left there was only smiles present. Some beaming. Some subtle. But still just smiles.

They’ve came around 7000 miles to get to this show. But in the last year that distance has never felt smaller.

For more information on the Battlefest League Dancers check out their homepage.