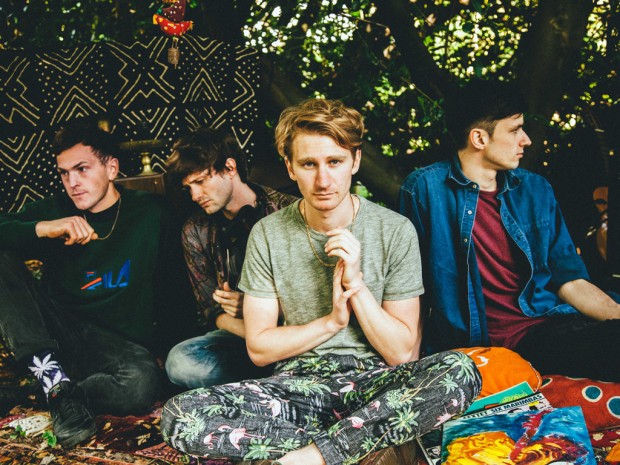 Glass Animals have been making waves throughout the music world with their particular brand of experimental, beats driven indie. Nyika Suttie went along to Komedia in Bath for a night of the weird and wonderful.

Glass Animals have known each other since secondary school and have been making music under guises such as “Afro Pony” and “Alligator Puffin” for many years. However their current name and debut album ZABA seem to have finally delivered the formula for success, and this was evidenced by the hordes of people who came to the upgraded Komedia show in Bath, packing out a venue twice the size of the one they were originally down to play.

First though, came Peluché, a 3 piece band from London who play groovy, trance-like indie pop with the surprising addition of a clarinet. Whilst the band is all female and fond of a harmony, you couldn’t get further from bands such as The Staves with this lot. They played a short but sweet set comprised of harmonised, at times nonsense lyrics over tribal, danceable beats that won the audience over by the end of the first song. Vocals were dreamy, reaching an ecstatic crescendo in songs such as Ohio, and you could see that everyone was enjoying them with little of the talking usually reserved for support bands. Close to the end of the set a group of people next to me started shouting “what is your name?!” at the stage as the lead singer announced that they had cassettes for sale in the foyer. They really did have cassettes for sale, and I for one am sad that I don’t have a tape player because I really thought they were fantastic.

With the scene set for a night outside of the ordinary realms of indie music crowds formed in front of the stage ready for the main act. To a background of jungle sounds and in a cloud of dry ice came Glass Animals, greeted by the sort of applause and cheering usually reserved for far bigger acts (although it should probably be mentioned that we don’t get a lot of bands playing Bath!). At first glance the band appeared rather nice and middle class, as you would imagine a band from Oxford to be, but they soon kicked into the first song with a whole heap of energy for a wholly mellow band. Soon everybody was having a good groove to the beats and watching as the lead singer (Dave Bayley) acted out all the lyrics with his hands, which was surprisingly charming really. Bayley seems to be in perpetual motion, at times dancing like a rude boy spider doing the Charleston, and at others climbing speaker stacks and jumping off them, as he did during the extremely popular Gooey.

The audience response to the band was pretty phenomenal really and the Animals looked rather taken aback. Interestingly few of the fans seemed to grasp the idea of a gradual song ending and the enthusiasm for the band spilt over into a few premature clapping incidents, but in all it was nice to see a band get such a response. A few people got over-excited and climbed on each other’s shoulders, which was soon put to a halt by some rather over-zealous security folks.

Glass Animals wouldn’t win any prizes for lyrics, but their simple rhymes and bizarre subject matter work perfectly with the wibbly, whimsical backing that never once seemed dull. In fact whilst you might put on their album as a chill out record, there’s little you can do but dance when you see them live. There’s a vibrancy to them which doesn’t seem to be as much in evidence when on record. There are two songs that sound remarkably alike (Gooey and Hazey) but as they’re both pretty good songs you end up not minding.

The encore kicked off with a reimagining of Kanye West’s Love Lockdown, which whilst good in its own right didn’t really do it for me. This coincided with Bayley invading a very excited audience throughout the whole song, and the only way to describe it would be that he was mobbed. One girl shrieked “I’m never washing this hand again!” Did I mention we don’t get many bands visiting Bath? The set ended with the wonderful “Pools”, a lovely smile from the band and rapturous applause befitting of their performance.

The gig was supposed to be at the fire-stricken Moles, but as this still seems to be showing little sign of re-opening the gig was upgraded to the lovely, multi-purpose Komedia. Bath’s Komedia is an old cinema and it shows with its large auditorium and art deco interior. It’s a surprisingly good place to see a band, with two tiers of standing and a balcony for those who feel more like sitting down. Acoustics are good and Glass Animals had bought some rather lovely material hanging things and lights which added wonderfully to the atmosphere they created. Drinks at the venue are pretty expensive (Definitely wasn’t expecting to pay £2 for a half of coke) but they have a great selection of local ales and ciders to suit any taste.

In all both bands played a great show and gained many a new fan within the Bathonian community. Peluché are certainly ones to watch, but I have no doubt that Glass Animals will continue to win over audiences all over the country, if not the world. The band is off on the European and American legs of their tour next but will be playing the UK festival circuit over the summer. If you like your indie rock a bit experimental and you’re fond of a good beat you’d be a fool to miss them.

You can find Glass Animals online here: glassanimals.eu. They’re also on Twitter as @glassanimals and on Facebook.

All words by Nyika Suttie. You can find more of her reviews here, she’s on Twitter as @puzzledbyadream and her blog is Outsider Looking Out