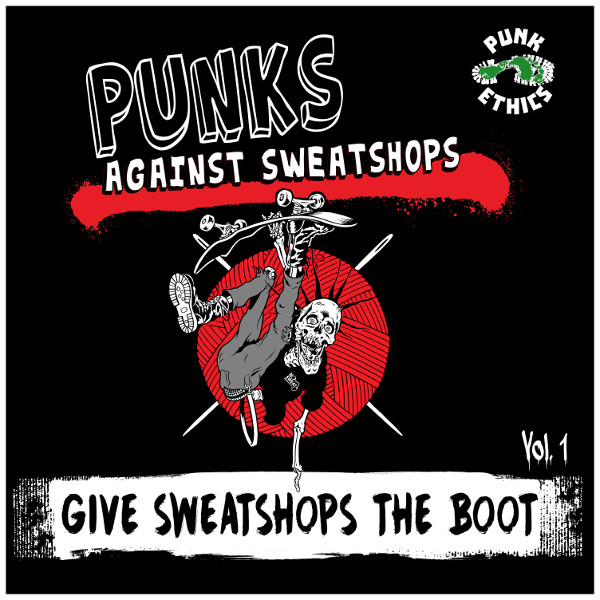 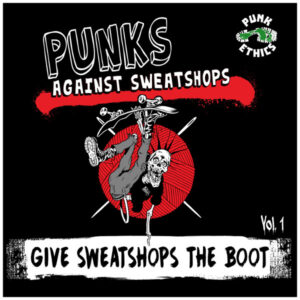 40 punk bands unite under the Punks Against Sweatshops banner to raise funds and spread the word that what you wear matters.  Nathan Brown says go and buy it!

The Punks Against Sweatshops campaign from Punk Ethics has released a download benefit compilation album featuring tracks from 40 punk bands including heavy hitters such as Jello Biafra and the Guantanamo School of Medicine, Propagandhi, Petrol Girls, Restarts, Oi Polloi and Wonk Unit. There is a whole host of DIY punk bands taking in plenty of styles, many of them featured by Louder Than War in the past, and most of the songs having some relevance to the campaign itself of the current political climate.

The whole aesthetic is designed to pull on our desires. It has a title that parodies the ubiquitous Give ‘Em The Boot series of compilations from Hellcat and cover art that nods to the ultimate skate punk artist Pushead.

The folks at Punk Ethics have taken the wise move of ensuring they do not exclude anyone from participating by offering up the compilation on a Pay As You Feel basis. But this is a benefit, making money for the Punks Against Sweatshops campaign and No Sweat’s Garment Workers Solidarity Fund so they have added a “suggested price” of £5. Personally I think this is way too little and was happy to pay £10. Even at that price it’s only 25p per track. But VFM isn’t the point. The point is what they are doing with the money and the campaign itself. The Garment Workers Solidarity Fund is providing support to garment workers in Bangladesh affected by Covid 19.

It is heartening that so many bands have already signed up and committed to using sweatshop free t-shirts for their merch. But there is still work to be done so this is not just about raising funds, it is about spreading the word. The hard work the campaign has put in has paid off as there are now many t-shirt printers serving the punk community who will offer ethical shirts rather than waiting to be asked. Rewind 15 years and the only way to do it was source the t-shirts yourselves and get them to the printer to add the design.

As Punks Against Sweatshops say “This campaign isn’t about calling out people over the T-shirts they wear, but aims to get people thinking and talking about one issue that is often overlooked or ignored in the punk scene – sweatshops. While our songs sing about social justice our band merch is often made in conditions of modern slavery. It’s time for that to change.”

So all “journalistic objectivity” out the window – I urge you to buy this!  The worst that could happen is that you’ve supported 2 campaigns. The best is that you could be exposed to some amazing new bands.

The release was timed to come out the day before the Punks Against Sweatshops gig at the 100 Club, which like everything else has been pushed back to 2021 due to Covid 19, and the Punks in Pubs live internet Q&A on Sat 6 June with Steve Ignorant, Ren from Petrol Girls and Deek from Oi Polloi among others.

Enthusiasm and coercion from Nathan Brown. More from Nathan can be found over at his Louder Than War Author Archive.