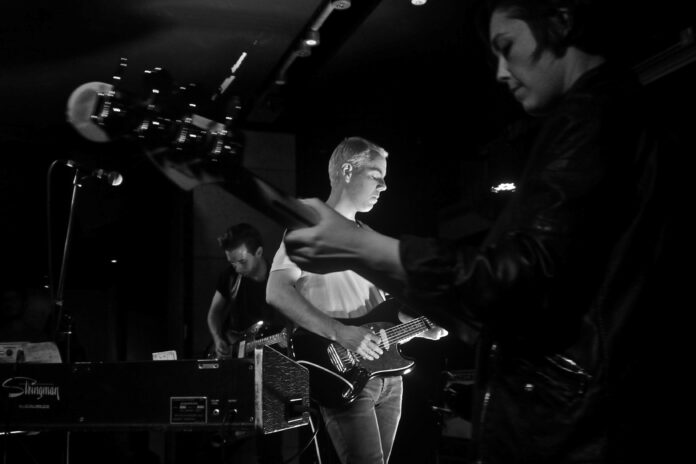 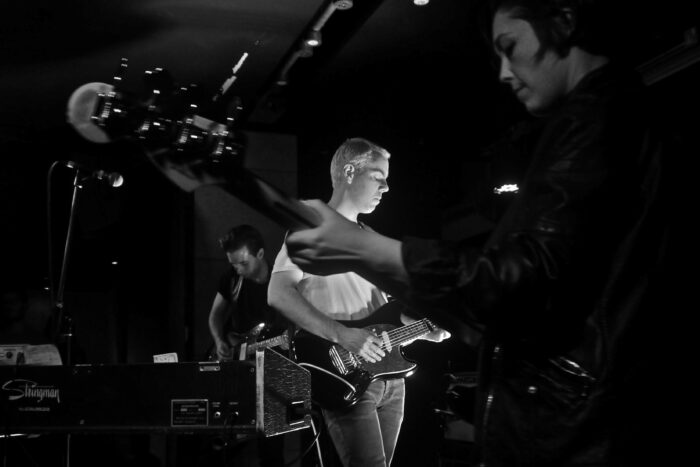 Two pieces of news help to colour this unexpectedly sunny evening in east London. One good: that Girls Names are in town, armed with a bunch of new songs from their forthcoming album Arms Around a Vision. One bad: that it’s not coming out until early October. On the strength of what they’ve revealed thus far, the pounding sonic journey of Zero Triptych and the rambunctious Reticence, it’s going to be a long four months.

Granted, with a style that often approaches Smell the Glove levels of darkness, a new Girls Names album is not one that especially needs releasing this side of summer. But that’s not to say they’re without a playful side. Indeed, it’s one of the main things that separate them from the self-parodying gloom-rock so commonly euphemised by the ‘post-punk’ label these days.

Reticence is a good case in point, a straightforward, Smiths-y chord progression bookended by screeching Sonic Youth-esque discordance. It’s not the bare ideas GN bring to the table that sets them apart, but rather how they flesh those ideas out, juxtaposing melody against chaos, indie-pop against noise-rock.

At one point, a well-placed strobe light sat behind frontman Cathal Cully almost serves to visualise the process. The one half of his face remains neatly composed; the other flickers between light and dark. The finished product is perhaps what you get when the two somehow meet harmoniously in the middle.

But there’s another aspect to their approach that brings an arguably needless drawback to tonight’s show. Long-term fans will remember the band deciding to shed all but one of their songs from debut album Dead To Me when it came to touring follow-up The New Life, and it appears that, with their third LP on the horizon, they’ve repeated the gesture once more. Bar Zero Triptych and Reticence, the setlist consists entirely of tracks presumably unknown to anyone outside GN’s inner circles.

Before, this was necessary. The New Life was to Dead To Me what The Bends was to Pablo Honey, or Primary Colours to Strange House – a shift in style and songwriting capability that had to assert itself over the band’s enjoyable but far less accomplished past. But if tonight is anything to go by, Arms Around a Vision will serve as an enviable third album following an extraordinary second, and that’s nothing to be ashamed of.