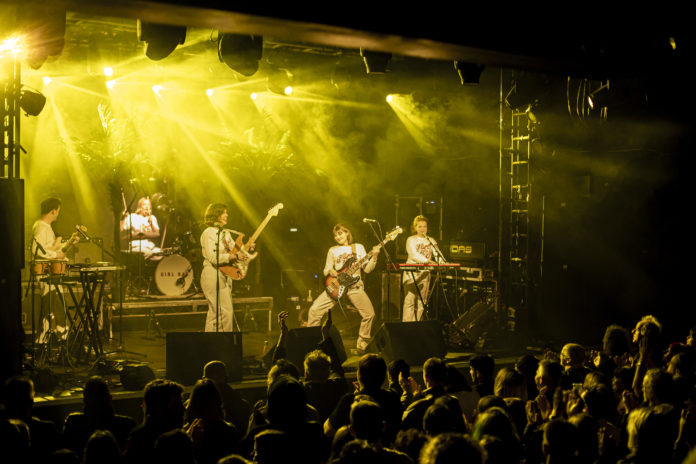 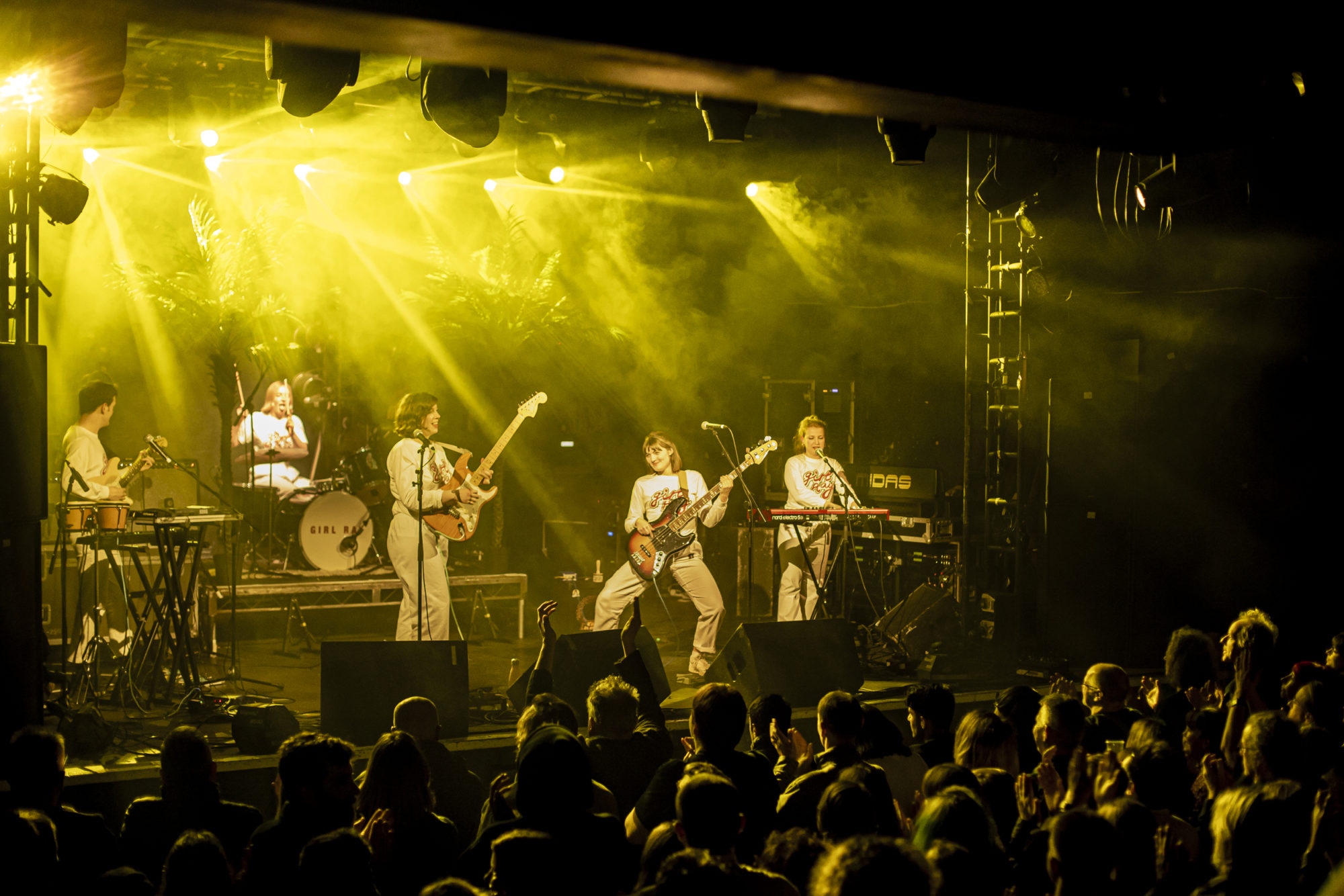 Bryony Hegarty gets into the Girl Ray groove at Camden’s Electric Ballroom reviewing the up and coming indie band for Louder Than War.

North Londoners Girl Ray (presented by Bird On The Wire) play to a home crowd at Camden’s Electric Ballroom. The harmonically gifted trio with sassy edge, Poppy (guitar), Sophie (bass) and Iris (drums) are joined on tour by Mike (guitar, keys) and newest addition a high-octane Lys on synth. An extensive series of dates takes them around the UK and Europe over the coming months.

The post gig journey tonight (a few stops on the Northern line) suggests there’s time to party; the good vibes are firmly in tune. A packed audience laps up Girl Ray’s set, acting as willing participants in a touch of crowd participation. Resplendent in white retro-lettered sweatshirts, employing Hawaiian plastic palm trees as stage props, lush lighting on a par with the band’s melodies, and Latin American percussive flavours, there’s a filter of vintage Miami across London edge. 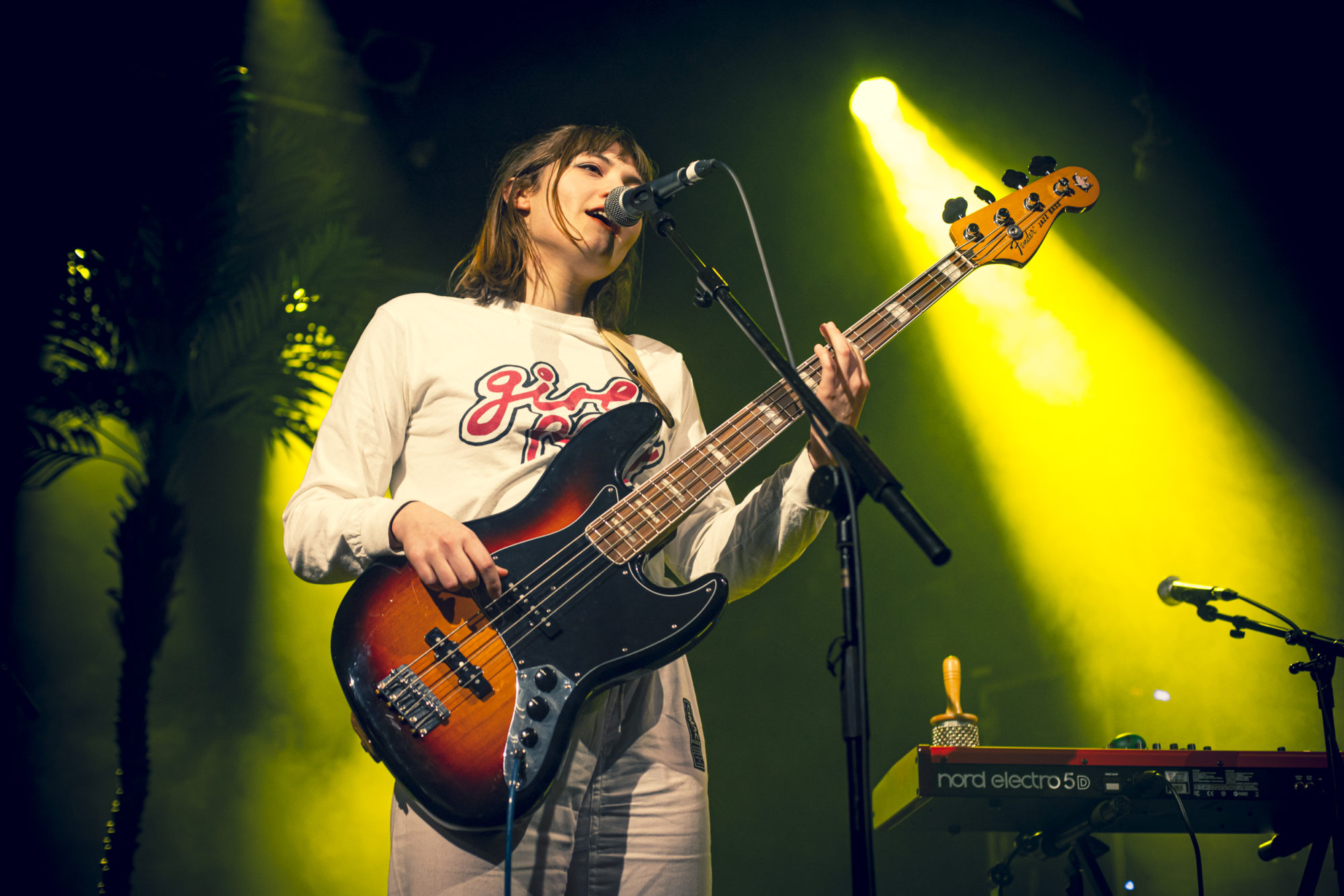 Signed to Moshi Moshi, Girl Ray first drew attention back in 2017 with onomatopoeic foray Earl Grey, a record reminiscent of eighties indie girl bands. Time on the road in the US supporting Porches followed. Newly released sophomore album Girl is tonight’s focus. Produced by Ash Workman (Christine and the Queens) songs feature electronica alongside signature guitar, keys, bass and drum kit format. Girl Ray retain the essential language of spirited indie whilst exploring wider genres and a determination to create well-crafted pop songs.  This manifests in an eclectic mix encompassing guitar drenched roots, house beats, R & B and trademark vocal interactions. Title track Girl is the stuff that sun-hued dreams are made of, Show Me More takes a funk/disco direction.

The transition from teen bittersweet soul searching to a more polished new decade is something of a coming of age. The crowd response is testimony that they’ve kept their fan base whilst garnering an ever growing following. Girl Ray’s distinct harmonies and high energy delivery hold throughout. A gusto filled performance of joyful interactions. Girl Ray mean business and they intend to enjoy the ride.

On tour now in the UK and Europe.

Words by Bryony Hegarty. Read more by Bryony at her Author Archive
Photos by Lloyd Winters, you can see more of his work here: lloydwintersphoto.com