Home Campaigns Girl punk band stand up to the Kremlin 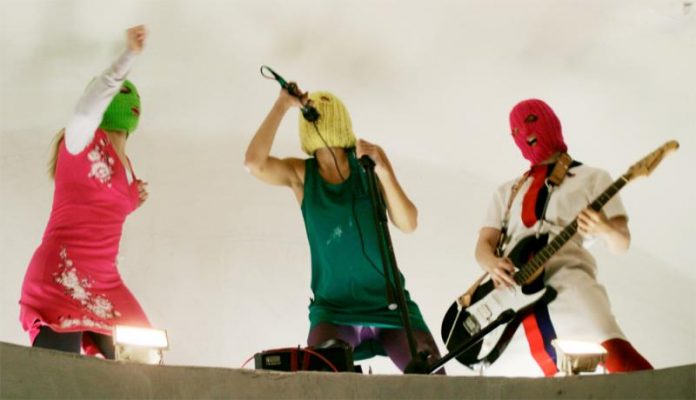 Inspired by Riot Grrrl but operating in a bit of a scarier environment, the band sing anti Putin songs, make a brilliant racket, put on balaclavas and went over the barricades… how cool is that. Don’t let anyone ever tell you that bands are not still alive out there…

We should get them to play over here in the UK. – Lets get them on at Rebellion!

Eight women stood in a line opposite the Kremlin, neon balaclavas hiding their faces, fists pounding the air in rugged defiance. Before police carted them off, the members of Pussy Riot managed to shout their way through a minute-long punk anthem: “Revolt in Russia ”â€œ the charisma of protest/Revolt in Russia, Putin’s got scared!”Â

Formed days after Vladimir Putin’s announcement in September that he intended to return to the presidency, Pussy Riot have become the latest symbol of young Russian discontent.

“A lot of us couldn’t sleep after this announcement,”Â said “Tyurya”Â, one of the founding members of a punk collective that has grown, since October, to roughly 30 people, including crew. “So we decided, damn it, we need to do something. We always went to protests and things, but it seemed to us we needed to do something more.”Â

The mid-January performance on Red Square, brazen in its choice of location and lyrics, catapulted the all-female punk band into the pantheon of Russia’s increasingly creative protest movement.

Pussy Riot are sworn to anonymity, hence the colourful balaclavas members use to hide their faces, even when giving interviews. “It shows we can be anybody,”Â says a band member who goes by the name Garadzha, wearing a hot-pink ski mask and matching stockings.

They decline to reveal the smallest details, aiming to maintain total secrecy. They will say only that most of the band members met at the small protests held by Russia’s once-feebled opposition, from monthly illegal demonstrations calling for the right to assembly to banned gay pride marches. Their average age is 25. They are hardcore feminists. Most studied the humanities in university. They won’t detail their day jobs