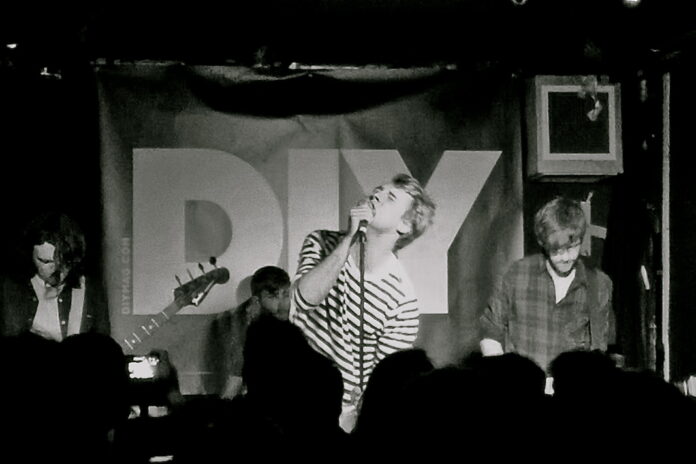 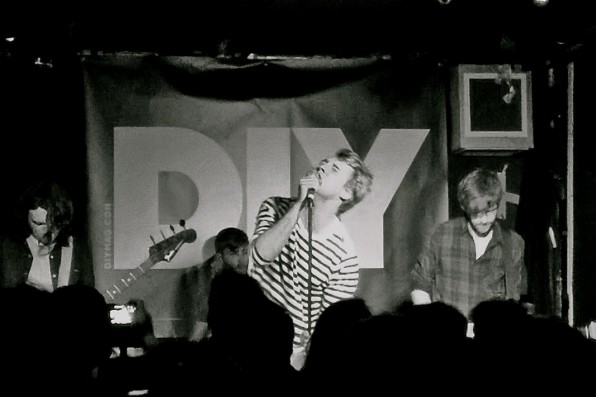 As ‘ones to watch’ type predictions go, Girl Band are a pretty safe bet, though not for the reasons you might imagine. For a start, they are no ‘girl band’, i.e. some neatly packaged, saccharine sounding display of nauseating feydom, but four young fellas so modestly groomed and casual in attire that the only time they’re at all distinguishable from the crowd is when making their racket on stage.

And holy hell is it some racket, sparing not a second of your attention throughout. That’s the other main reason why Girl Band make such a brave but brilliant closing act for DIY magazine’s Hello 2015 gig series: unless some kind of miracle/apocalypse occurs (delete to your liking), their sound is not one that’ll be gracing Radio 1’s daytime playlist in this life.

How The Old Blue Last’s rudimentary PA survives the fifty minutes of controlled chaos blasted through it is a mystery to all but the sound engineer. Limits are tested from the get-go, with opener Sexy Wife serving as a fierce, unforgiving introduction to the harsh textures that guitarist Alan Duggan is capable of. His playing on most tracks resembles the sound of a rusty moped refusing to start for some time before thundering off uncontrollably into the distance. Riffs are far from a priority, but there’s noise for miles.

Stage right stands Daniel Fox, a rare example of a bass player who can wear heavy distortion to great effect. (Should you need any explanation as to why distorted bass guitar is a personal turn-off, see Muse.) Moreover, his ability to maintain the groove of debut single Lawman, in the face of constant sabotage by Duggan and his pedal-board, provides the necessary backbone to what might otherwise seem cacophonous and indulgent.

In the midst of it all stands frontman Dara Kiely, who flits between screeching and slurring his words and rarely settles on a coherent middle ground. Any lyric that is decipherable is bleak and opaque, “I look crap with my top off” and “I used to be good-looking” being two immediate favourites, but his role as vocalist has little to do with using his bandmates’ efforts as a canvas. In fact, at times it feels as if he’s competing with them to see who can disorientate the crowd the most.

If a queue of disappointed souls that could fill the room twice over outside is anything to go by, then it looks fairly certain that this will be Kiely and co’s year. Savages’ razor-sharp post-punk provided the indie-rock scene with a much-needed shot of adrenaline back in 2013, but now it’s the turn of Girl Band to crank things up and truly screw with us.

Girl Band can be found on Facebook and are on Twitter as @GirlBandDublin. And don’t forget to check their Bandcamp out if you want to hear more cracking music by them.