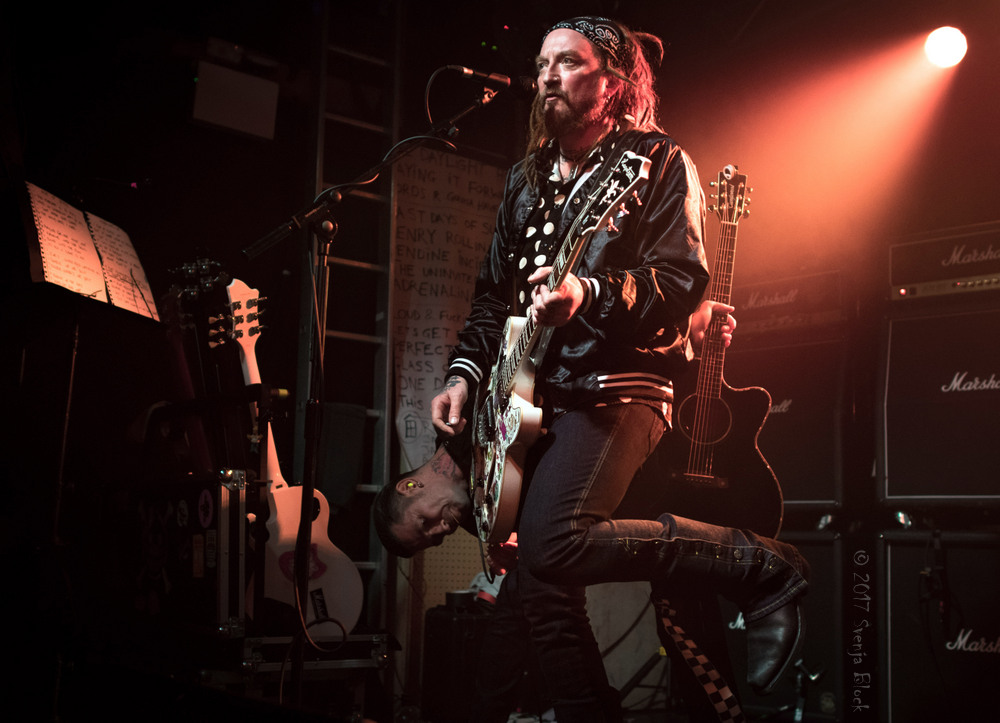 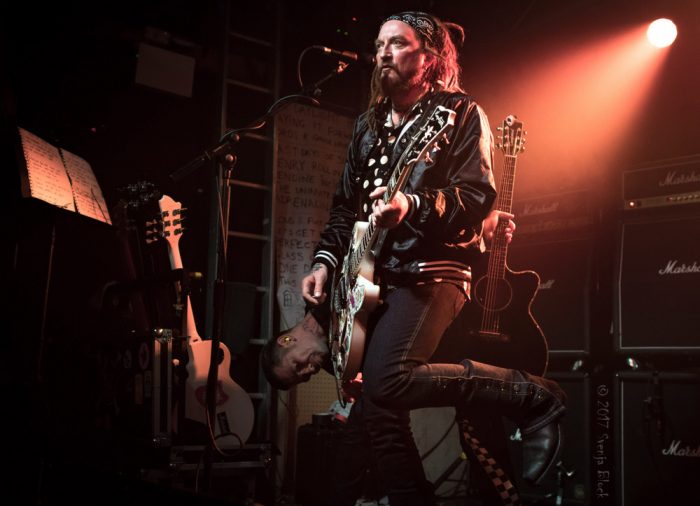 Ginger Wildheart’s Birthday bash was the hottest ticket in town. Kristiina Treganna Malinen joined an emotional celebration of life and death, many appearances by friends and renowned guest musicians, and the lively spirit of the man himself.

On a Sunday night, we are gathered to celebrate Ginger Wildheart´s 53rd Birthday at The Garage in Highbury Islington. It´s just me and my 600 best friends and it goes without saying that the venue is absolutely packed. Yet the atmosphere among the crowd is warm, friendly and welcoming, which is always the way at these occasions, since Ginger´s fans are not just any supporters but a tightly knitted extended family, who are always happy to accomodate more fellow ‘Wildies’.

The Birthday bash is considered one of the real highlights of the year to many of us. It is never just an ordinary gig but full of surprises – be it the amazing guest stars on the stage, or a lot of sick (for instance, last year’s bash, when the musicians and crew members were all suffering from a heavy stomach bug, but still performed to us, occasionally running to the buckets provided that were placed on stage). Huh. That was bad.

This year it could have been much worse, though…this year´s Birthday bash is something very special because it almost didn´t happen at all. Ginger, who has always openly spoken about his struggle with depression, hit rock bottom in August, ending up in hospital after trying to take his own life.

Today he seems to be in good spirits, though. On Twitter he advised to attend early at The Garage; it was going to be one long show without any opening acts.

Ginger Wildheart is a brilliantly talented musician (if not a genius, but certainly one of the most underrated performing artists in the cut-throat music industry), a multi-instrumentalist and workaholic, who pours everything into his music only to resurface with his many varying projects when it’s not going under his own name.

The Wildhearts have taken Ginger on his most recognisable and adventurous musical journey so far: eight published studio albums, six live albums and three EP´s since 1992, gaining him the much deserved strong following he has today.

The man himself takes to the stage at 7.45 pm, dressed in a Cheap Trick jacket, sporting a handsome beard and his famous dreadlocks. He picks up his guitar and when the other musicians, Emily Ewing and Matthew Colley join him, the show is ready to start. It all begins with “The Daylight Hotel” from his newest album ‘Ghost In The Tanglewood’, followed by some of his solo work and the audience is loving every second of it already. Ginger entertains with his speeches in between songs. He asks if anyone else is sober but him and he exclaims that it feels weird to be sober, but he is not the only one. I am sober too, sure we´re not the only ones!

We are being treated to several songs from Ginger´s projects G.A.S.S. and Hey Hello!, performed today by Ginger, Keli Compulsive, Givvi Flynn Ai and Toshi.

One by one his “friends” join the celebrations on stage. Lots of faces – I don’t recognise all guests by their names, but some are very familiar. I spot Lauren Tate from Hands Off Gretel, The UK Subs’ Jamie Oliver, Rich Rags from The Role Models and cellist Maya, who performs a few cover songs.

To our great delight, Jim Jones dashes on stage to sing “Live Wire” from AC/DC. What a nice and appropriate way of paying respects to Malcolm Young, who sadly passed away in November.

Ginger starts talking about the sad losses the rock’n roll world has faced recently, mentioning Tom Petty´s sudden death, and from the first chords I recognise “Free Fallin´”, my favourite Tom Petty tune! Everyone is joining in – soon the sing-along turns into another Petty classic, “American Girl”. There are tears in my eyes, but I am singing so loud that my my throat hurts. 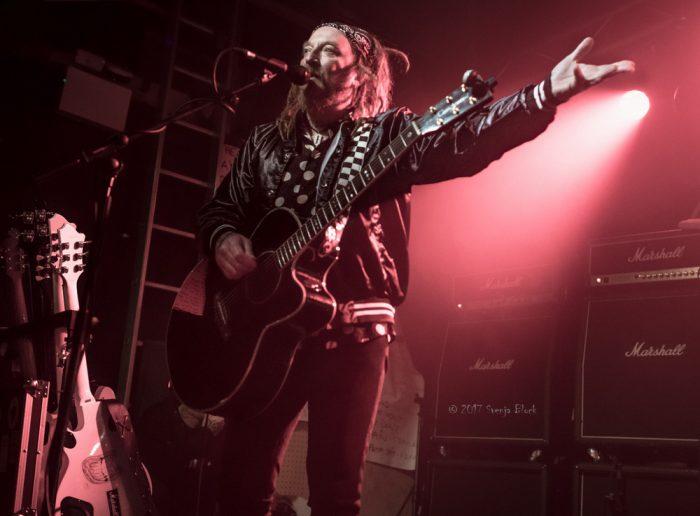 David Ryder Prangley gets his special moment on stage and performs a Silver Ginger 5 classic, “Girls Are Better Than Boys”. Just a moment ago everyone was mourning for Tom Petty, but now our heels are pointing up to the ceiling again and we boogie away to this marvellous little track. The legend that is Bernie Torme, gives us his version of “New Orleans” by Gary U.S. Bonds

At this point Ginger Wildheart swaps his instrument with a new bass guitar he proudly presents to us. We get, wait for it, yet another guest star – Dregen, from Backyard Babies, and – oh yes- he is the same guy that replaced Ginger in the Michael Monroe Band when they parted ways.

They play material from ‘SuperShit 666’ and one song that he originally recorded with Michael Monroe. He seems to cringe a bit but eventually admits to ”Superpowered Superfly” being a good song anyway. I agree, remembering Ginger singing it at a MM soundcheck once years ago, thinking to myself that it sounded better sung by him than Michael himself…

By the time a mind- blowing version of “Ace Of Spades” from Motorhead is played, it feels like the whole building is shaking because the audience is going wild.

We are celebrating life, and death, with both melancholy and enthusiasm. “Did Chuck Berry die this year, too?”, Ginger wonders, and off we go, to the famous riff of “Johnny B Goode”, having a good ol’ time.

The show has already lasted a good few hours, when he calls The Wildhearts on stage with a special line-up starring CJ, Rich Battersby, and Toshi (from Hey Hello!) on bass guitar. More guests are called on stage, including Chris McCormack (3 Colours Red, The Professionals), Lauren Tate from Hands Off Gretel doing my favourite ever, “Suckerpunch”, and last but not least, the great Frank Turner.  We hear the classics “My Baby Is A Headfuck”, “Sick Of Drugs”, “Caffeine Bomb”. I didn´t think there was any energy left in me at this point, but I find myself hanging on in there, belting out every tune with the whole room. No tears no more, no sweat either- when we finally reach, “29 Times The Pain”, it feels like my body has stopped existing, I am kinda floating.

“What, you would probably be here rockin´for seven hours”, laughs Ginger. The show has lasted probably at least three, but yes, there are still so many many songs we would have loved to hear.

And oh, I forgot to mention that at some point we were all singing “Happy Birthday” to Ginger Wildheart, I certainly hope we can do it many more years to come.

Christmas is coming. I have received my presents already and I’m leaving the venue, totally exhausted but happier than I’ve been in ages. Happy Birthday Ginger Wildheart, and thank you for being here tonight. 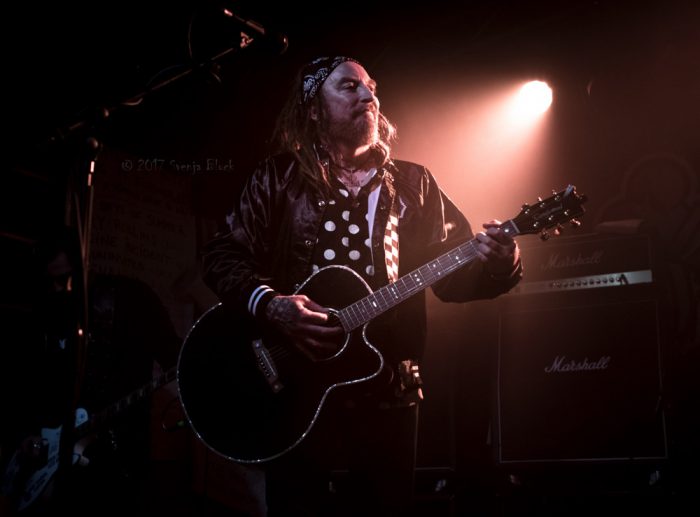 All words by Kristiina Treganna Malinen. You can find more of Kristiina’s reviews at her author’s archive.