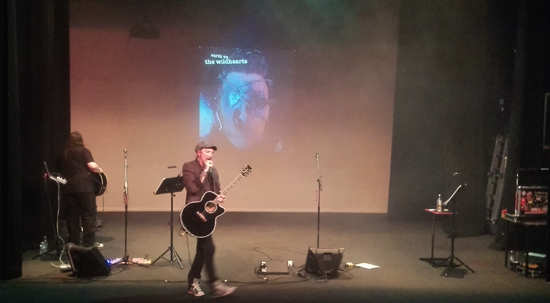 Armed with his acoustic guitar, Ginger Wildheart is hieing himself around the country at the moment playing a host of theatres where he’s regaling the audience with songs accompanied by anecdotes, jokes and words of wisdom. Phil Walchester caught him in Brum, check his belated review (circumstances contrived to make it impossible for Phil to submit his review earlier) below.

Ginger is a man who’s kept himself valid over his storied career by always trying new things, from forming a band with ”Metallica riffs and Cheap Trick choruses” to early adoption of the Pledge campaign model (and subsequent GASS subscription platform – although tonight’s story only goes as far as that fateful first Pledge, beginning with Sharon Osbourne summoning him for firing from the Quireboys and the initial formation of The Wildhearts – and this air of experimentation is carried into the tour being booked entirely in new venues to Ginger. Mainly theatres, such as tonight but no-one is begrudging a seat for the 3 hours of solid performance .. or the opportunity for ice cream in the intermission.

Jase Edwards of Wolfsbane / Sonic Circus / God Damn Whores , who engineered and produced / played on a cluster of Gingers solo projects and The Wildhearts ‘White’ album accompanies on guitar and vocals for the medleys of songs used to illustrate each era by album. It’s an interesting way to present the music, scratching an itch without making the performance too stop-start –  And a performance is just what this is, starring Ginger as Ginger, taking us on a tale of births, deaths and catfish scenarios via haunted castles, Willie Nelson’s ranch and a Thai jail … featuring occasional horse ejaculate and also one anecdote involving a former guitarist to rival that of Stewart Lee’s cat’s feet towel.

Ginger is a naturally engaging raconteur, with warmth, character and humour, unafraid of how some of his stories paint him. Despite an attempt to begin early after an earlier door time however, the show does run over a little, resulting in skipping the $uper$hit666 footnote of his career, although aficionados still gain insight into lesser known projects, including Howling Willie Cunt and The Brides of Destruction alongside the more familiar theme of his love/hate relationship with record companies, the recording process and Kerrang! magazine.

It’s a story soundtracked by a back catalogue too vast to be able to cover everyone’s favourites and refreshingly Ginger sidesteps this although some of the songs included in the medleys could easily have been lapped up by the enthusiastic audience in full, lesser spotted gems like ‘Be my Drug’  and ‘.com Together’ bubble up to the surface and these tasters whet the appetite to see where Ginger’s musical odyssey through life takes him next.

Remaining dates on the tour…

All words by Phil Walchester. More writing by Phil for Louder Than War can be found at his author’s archive.