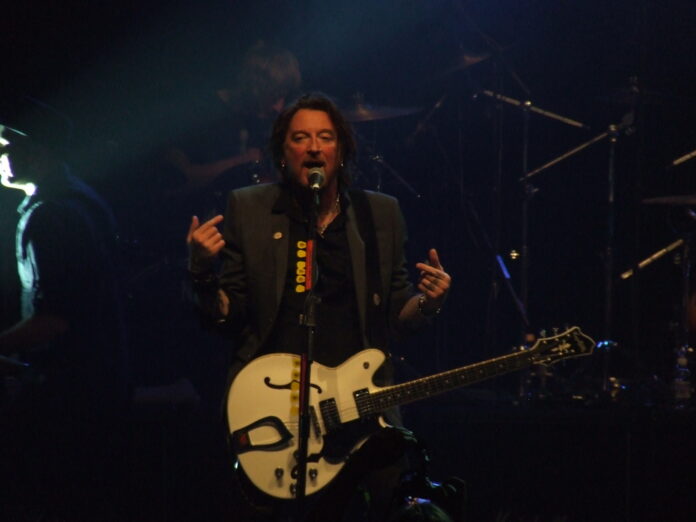 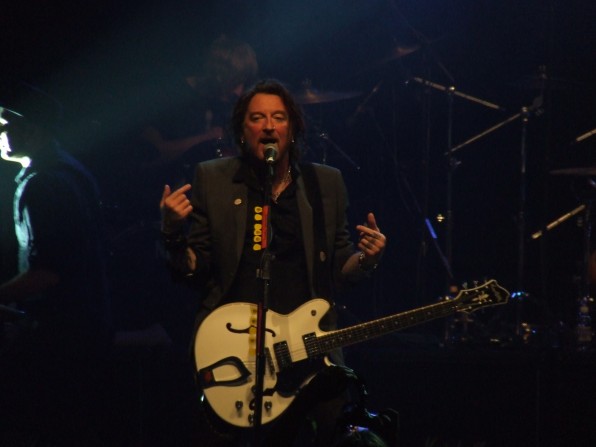 Martin Haslam reports back from Ginger Wildheart’s annual birthday bash at Kentish Town Forum – and this time it’s a biggun, the old 5 – 0! Or, as Ginger himself puts it “Oh F**k, I’m 50”

In addition to being one of music’s busiest people, Ginger Wildheart likes to apply added pressure to himself by trying to give something extra special at each annual birthday gig (well, they would be annual, wouldn’t they?) This year was my third in a row, but for Ginger, the 50th birthday was always going to be a big achievement. He’s still here, as he pointed out, reminding younger fans that he headed Kerrang’s ‘Most Likely To Die’ list for some years. Oddly, all these years later, he, Lemmy and Keith Richards have defied the odds. Of them all, I think Ginger is the one who’s most successfully turned his life and career around by taking life seriously. As far as that’s possible.

2014 has been a typically busy year for Ginger; releasing ‘Albion’ via Pledge Music (our review); changing management; starting his fan-based G*A*S*S campaign (three brand new songs plus two unreleased tracks per month for 12 months for £30); recording and touring with Courtney Love (which he spoke to us about); planning his acoustic / spoken-word tour for the spring with a book release via Pledge Music. No doubt I’ve missed something out. Oh yeah; producing Love Zombies’ upcoming album.

So, we’re back to the Forum after last year’s bash at the stylish Koko. Both venues have similar unappreciated attitudes to bottled water / soft drinks, sadly. I know I’m in a minority, but throwing out water bottles from your bag then charging £3 for a bottle (“sorry, but we can’t give you the lid”). Why? I might dare to save some for later?! Still, the bar price was less extortionate than last year. No fruit juice though. Rant over. 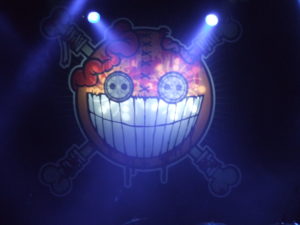 Ginger had promised this year would feature only self-penned songs, no covers, which turned out to be almost true. More of that later. My minor gripe would be that the pre-gig music was of the “bung on a CD” variety which didn’t seem to be a depiction of his personal tastes, from what I know. I’d like to have heard some lost gems; Starz, e.t.c.

Still, what is a brave move is starting your set with two of your newest songs; ‘What Would Henry Rollins Do?’ and ‘That’s A Nasty Habit You’ve Got There’ from the G*A*S*S project. The warm reception they get shows just how many people have signed up for the year. Kelii Compulsive takes the vocal duties which were mainly handled by Victoria Liedtka last year and seems a perfect fit; Ginger’s vocals and melodies suit the boy/girl dynamic really well. In fact, the ladies steal the show tonight, with the exception of David Ryder Prangley’s take on ‘Girls Are Better Than Boys’, regardless of the shambolic ending.

Drum guru / entertainer Robin Guy joins in for ‘Only Lonely’, while Ginger sits at the drum stool for a storming ‘Rats’ with Chris Catalyst and Givvi Flynn sharing the vocals. Even ‘Random’ Jon Poole gets his turn on drums with Rich Battersby for ‘If Life Is Like A Lovebank’. The two covers are a weird version of ‘Country Boy’ with Jase Edwards and Kavus Torabi exchanging licks and Jason And The Scorchers’ classic ‘White Lies’ with Warner Hodges burning the frets and slinging his guitar around his neck. He can get away with it.

Highlights? ‘If You Find Yourself In London Town’ with Micko Larkin’s sublime solo. Yolanda Quartey can improve any song, as she proved with ‘Bipolar Baby’. Amazing. Givvi Flynn, Chris from Baby Chaos and Jo Dog attacking ‘Mindslide’, Paul-Ronney Angel’s suitably deranged take on ‘My Baby Is A Headfuck’, Beki Bondage owning ‘Give The Girl A Gun’ and Hollis from Love Zombies’ take on ‘TV Tan’. With guest appearances from Tracey Hunter, Saffron (Republica), Sam Yaffa, Exit International, Chris McCormack and Dom Lawson, it was quite a night.

26 songs in 2 hours 20 minutes. By sharing vocal duties, Ginger clearly felt new inspiration for older songs and shows his humility. Yep, the ladies nailed it tonight, but special thanks also to the core of the band; Chris Catalyst, Denzel and Jon Poole. Canny bloke, Ginger Wildheart. Surrounds himself with the best.  Long may he entertain us.