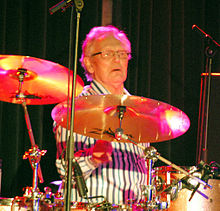 One of the greatest drummers in the history of rock music, Ginger Baker, has died at the age of 80. Often called the first superstar rock drummer, Baker brought in a myriad of new influences to the form from jazz to African drumming and fully explored the possibilities of drumming – bringing it forward from the mere backbeat of his predecessors. He is credited with inventing the drum solo, pioneering the double bass drum and creating a whole manner of stunning new rhythms.

Perhaps best known for his work in Cream – with the trio being the first virtuoso rock groups formed of great players to push forward the boundaries he also had along and varied careers that saw him play with PiL, of all bands, and many other projects.