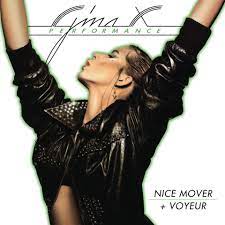 Reissue of German electronic pioneers Gina X Performance’s first and third albums, plus bonus single tracks and remixes. This set includes five different versions of their most well-known song No G.D.M, which was dedicated to the gay icon Quentin Crisp. Ian Canty puts on a show…

The Cologne-based outfit Gina X Performance formed in 1978. They initially consisting of a duo of singer/songwriter Gina Kikoine, an art student with a taste for the New York scene of the mid-70s and multi-instrumentalist/producer Zeus B. Held (ex-Birth Control). The pair, at the time a married couple, drew on influences much wider than just pop or rock, with radical art movements and a highly playful attitude with regard to sexual politics providing much of their lyrical thrust. They also embraced the new synthesiser technology that was gradually making its presence felt in the post-punk world of the late 1970s. Adding to all this, the band presented pumping dance rhythms with a difference and Kikoine’s androgynous visual image.

This barrage of visual and lyrical influences, plus the ultra-modern sound, created quite a stir and helped Gina X Performance attract attention of the local EMI affiliate Electrola. As a result their 1979 debut album Nice Mover was a joint Crystal/EMI Electrola release. By this time their ranks had been swelled by drummer László Czigany, with Heinz Trewer programming synths and Martin Homberg working the sequencer.

Nice Mover begins with the soaring, vocoder-boosted sound of the excellent title track. Gina’s detached, sing-speak vocals here certainly prefigure Grace Jones’ work and also The Flying Lizards. She’s totally imperious above the electronics that flitter about underneath, but does so in an beguiling fashion. The thumping, addictive dance beat of No G.D.M. follows next. The song was dedicated to Quentin Crisp, with the title itself being derived from a quote of his about being unable to attain that “great dark man”. The tune comes complete with such a solid hook that it is no wonder that it became Gina X Performance’s calling card and Erasure, who seem in a way to be kindred spirts, covered it in the late 1980s.

A whistle and crash of a bomb sample gets Plastic Surprise Box underway. This is a fast moving and bright piece of electronica that again dances around the theme of sexuality, before speeding up to infinity at its end. After that white knuckle ride comes the more laidback, static beat of Casablanca, with the rhythmic surge of Be A Boy then taking us back to the dancefloor. A nice touch on this effort is Held’s computer voice blankly answering Kikoine’s lead vocal. Exhibitionism’s title threatens to overplay the album’s concept a tad, so it is a good thing Gina’s cool delivery is at its very best here and set against an attractive electro backdrop.

Bouncing right out of the blocks, Black Sheep is closer to mainstream pop than most of the LP and features a wry and sneery vocal delivery. Nice Mover moves towards its conclusion with the mad jungle samples of Tropical Comic Strip. An easy-going but epic cabaret synth pop sound that fits Gina X Performance like a glove, it provides us with a typically inspired finale. After this we get four remixes of No G.D.M, with the big beat of the Psychonauts’ cut and the minimalist Red Axes Mix being the stand-outs for me. There is also a VV instrumental version of Nice Mover.

Skipping the far more commercial pop of the band’s second album X-Traordinaire from 1980, which received a rather underwhelmed reception from press and fans, we then jump to 1981 and Gina X Performance’s third collection Voyeur. I.C. Code starts off Voyeur with verve and energy, powered forward with an assertive drum pattern and purposeful synth patterns. It’s an immediate, urgent sound, but one with quirks that built on Gina X Performance’s core strengths. Horror Vacui’s forward lunges follows, successfully setting the scene for an impish vocal.

Less is more on Voyeur, something that works well with Held never really overplaying his hand. Perhaps Babylon Generation’s mix of blank voice and a cheesy chorus is closest to where it threatens to come off the rails. This German language offering is catchy though and might have been a success as a single, though no such thing was forthcoming from Voyeur.

A more sedate but doom-laden piece of electro called Kaddish follows, with a lyric that addresses the Jewish ritual of that name. Then Video Dragueur’s intro of sliding synths takes the listener into more offbeat territory, before settling into a sparkling piece of slightly menacing pop music with words that really focus on the band’s arty roots.

The second half of Voyeur lyrically examines extreme human sexual acts and is sometimes quite unsettling. This is evidenced most overtly on Pederast Dissection, whose grisly subject matter is juxtaposed to a perky musical landscape. Hypnosis/Hypnose is a less upfront sound, almost at ballad pace for Gina X really, except that the song words detail a bondage and domination session. The wobbly sound of Hom Intern is headed up by a synthesised sax and album closer Kiruma ends things up with a dose of pure ice-cold electronica.

There are three bonuses attached to this disc. The chugging synths of instrumental Eurode and an electronic pop version of The Beatles’ Drive My Car were both part of Zeus’ 1981 solo LP Attack Time. Gina provides some of the vocals on the latter, which was belatedly issued as a single in the UK in 1984 on the Statik label. Finally we have a lengthy DJ Hell remix of Nice Mover to close out this collection. After their third LP Zeus B. Held started to build up a big reputation as a producer and was kept busy working with Fashion and John Foxx among others. Gina X Performance would return themselves in 1984 with the LP Yinglish.

Though not a massively successful outfit at the time, Gina X Performance can boast of being highly influential on the pop music of the 21st century. You can hear the impact of their combination of dry, flip vocals and chilled synthesised dance beats in a number of present day artists, for example the great Ladytron. Cop a load of this set and you could think it was recorded yesterday. But more than that, they left an impressive archive behind them, with Nice Mover and Voyeur arguably finding them at the very peak of their abilities.