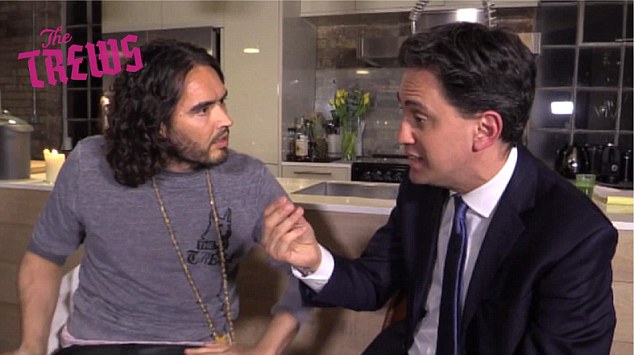 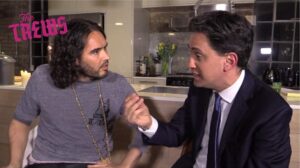 One is a modern media clown in a land of fools where the jester is king – a killing joke jester with a political agenda, a Daily Mail annoying multi media personality with too tight trews and a mouth full of machine gun quips and anti establishment shrapnel – the other is a formerly stiff politician who has suddenly transformed, like the incredible hulk, from a boating blazer shirt, tucked into his pants, rabbit in the headlight, awkward nerd, political stiff into this relaxed and increasingly assured figure oozing a confidence and a laconic charisma like an elixir of life.

Cometh the man cometh the Miliband…

The totemic meeting between two middle aged men today was a spark point for so many pointers to the future that what they actually said to each other has been lost in the fast twitching world of online media. It was the fact that Edward visited Russell that raised digital eyebrows.

The 20 minute interview for Russy Wussy’s Trews youtube channel was a meeting of two heads of the new state. A long haired digi-Jesus with a mouth full of twisted vowels and a short haired political nerd who in the last few weeks has somehow suddenly come alive after stumbling though a difficult gestation period and looked relaxed in what would have once been the rabbit snare of his stumbling career.

12 months ago Miliband would have been an abject stiff puddle of terror, quivering with media lust and shivering expectation about to be devoured by the spider like sex comedian but all of a sudden he seems to have turned into a twitching sex god on his own terms. What was once fumble has now turned into TV orgasm. Ed destroyed Boris Johnson over the weekend in a heavyweight bout, a glimpse into a future PMQ’s with a Elvis like thrust as Boris blathered and slithered. If Ed can tear the UK’s most popular comedian and mayor of England apart Brand was now going to be easy meat.

Why, you ask, is this Russell Brand being so feted?

In 2015 Russell Brand is the last man standing – the last popular culture icon who is still shooting slogans and ire, he is the endgame pop political figure – a later day Che Guevara without the rumble in the jungle revolution and the real guns, a later day Joe Strummer without the songs and a later day Bono without the, er, whatever.

Where once the romantic rebel came with a guitar and a half thought out counter culture agenda, the modern rebel don’t even need the chords – just the rhetoric. they may be flags that are getting waved but at least they are flags.

He is a combination of all the frustrations and colliding confusion of youth, the idealism tempered by the endless glow of the internet. He is the last stand of putting your life into the hands of a rock n roll band as his bezzie mate Noel Gallagher once sort of sang, a metal guru for the disposed and the internet generation, a generation binary code who tweet and pout (for instagram) instead of twist and shout. A generation who know that Facebook is for their parents to spy on them and who lost interest in conventional politics and boring pop stars years ago and have put their faith in a skinny comedian who waves the right flags like John ‘Gimme Some Trews’ Lennon once did when he got bored of the Beatles.

Of course Russell’s ship is full of holes but let’s face it so is ours and whether he believes in half this stuff or not at least he is pushing these flags back up the poles, and at least he knows his West Ham United from his Aston Villas and in a world of corruption, expense accounts and the bland PR opinion of modern pop culture he stands out a mile.

Miliband is smart enough to know the danger of entering the Brand lair. This is the bachelor pad which once reaked of sex and now reaks of revolutionary hardons but is the direct route to the thinking man’s teenager and is a direct route to the raging pulse of the yoof.

It could go horribly wrong but he who dares may win this one.

It also underlines that Russell Brand and youtube are the part of the current key battlegrounds of the modern political wars. Dimbleby/Question time and the BBC could well be the skirmishes of the past. This is a new world. Parents don’t like Brand ‘he’s dirty/needs a wash/got long hair’ they cry just like their parents winced at Mick Jagger. In the binary fracture of 2015 a home studio, the internet and a quip comedian could be where its at…

No future in Englands surfing as someone once didn’t quite sing….