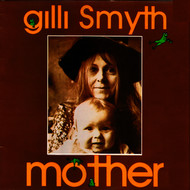 Reissue of 1978 oddity by (at the time) ex-Gong vocalist Smyth, with assistance from partner Daveid Allen amongst other Gong alumni…Ian Canty tries to make sense of this baffling stoner trip into the female psyche….

Even in what was a rum year in the music world, “Mother” was a bit of a strange one. It really could have been recorded and released 10 years earlier and no-one would be any the wiser, this record would not have seemed out of place. Not that being that way is necessarily a bad thing….but also this platter pulls off a unique trick in that, purely by chance I would have guessed, it also shares a certain spirit with the more challenging post punk bands of the time, through it’s experimental sound collages and feminist polemic. All this came unpromisingly from a spin-off from Gong too, perhaps the ultimate “Hippy” band.

Gilli Smyth, she of the “space whisper”, left Gong in 1974 in preparation of the birth of her son Orlando (who much later on would play drums with Mum and Dad in a reconstituted, 21st century Gong) but collaborated with Daevid Allen on this record which was a reflection on motherhood and gender roles. Decamping to Mallorca to record this in true hippy fashion, Smyth’s odd vocals somehow fit in with the “quirky” new wave – for instance Toyah must have been listening for one, though music-wise we’re back in the early 70s jazz/space rock zone. It is difficult to sum “Mother” up easily as a whole so I’m going to break it down track by track and see if that reveals any sense, though I have my doubts….

Opener “I Am A Fool” verges on saxophone-led chirpy psychedelic folk pop – there are a few jazzy excursions of the kind of noodling that always made Gong a bittersweet taste for me on “Mother”, but on this song the balance is right, it’s a nutso pop classic and this is the closest thing to a natural single here. Next comes the eerie sound collage of “Back To The Womb”, which is very much typical of David Allen’s usual schtick with out of context voices added. This leads into the meandering, dreamy nursery rhyme “Mother”. Thankfully we’re on firmer ground with “Shakti Yoni”, yes this track could have done without the slightly annoying honking sax that Gong loved so, but it’s a solid enough trippy rocker with Smyth’s vocals taking an unexpected Spike Milligan twist. “Keep The Children Free” another “mood piece” with a bit of bongo frenzy and beat poetry included, goes right back to the 60s template.

“Prostitute Poem – Street Version” is a new take on what was a mainstay of Gong’s live show, though it shows its age and could have come from the “Look Around You” spoof “Music 2000” show! “Ok Man, This Is Your World” follows, a meditative piece of jazz rock, the sax here isn’t as irritating as on “Shakti Yoni” and consequentially works a lot better. “Next Time Ragtime” has a more acoustic folk with sound-bites, sexual politic polemic to the max. The accapella beginning of “Time Of The Goddess” leads into synth squiggles and a portentous drum beat, more atmosphere than a song per se. And of course it ends with a fairy story! This is a bit cringe-worthy and of the times, or a decade before if you like, but sweet too in a way. It possibly seemed like a good idea at the time and with no commercial consideration they just went ahead and did it. You’ve got to admire that “don’t give a damn” attitude, I’m sure it made perfect sense but it’s a (fittingly?) daft end to the record.

“Mother” as a whole would have probably been laughed out of the building in the Post Punk world of 1978, the final evidence of the death of the hippy dream. But now I found it charming in its eccentricity and musically imaginative, even if it doesn’t quite work sometimes with the decidedly Avant Garde approach taken. A curate’s scotch egg.