Home Music Reviews Live Reviews Gigs Are Back! With An Audience! The Heat Inc. Live In Dalston 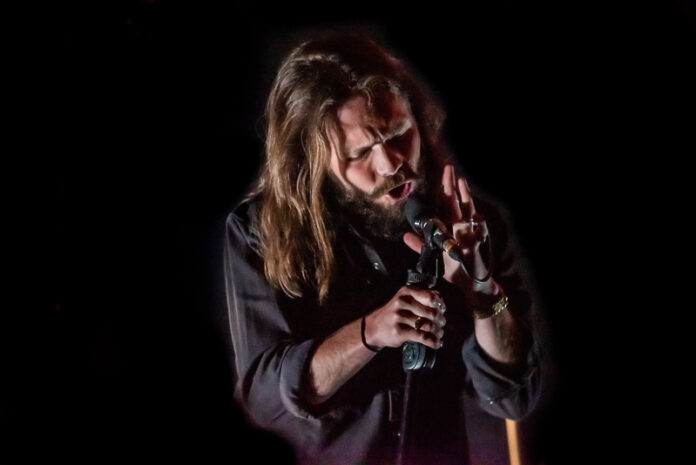 Gig-going is back! The Heat Inc., self-styled “loudest rock’n’roll band in London” mark the return of live music in front of a small segregated audience in East London. Tim Cooper and Adrian Hextall join the strictly segregated action.

“How’s this, ladies and gentlemen?” asks the long-haired, lavishly-bearded bloke in black, a dead ringer for late-period Jim Morrison, at the microphone stand.

“Live music!
“With beer!
“With other people!
“Who are not your family.”

The capacity crowd roars its approval at The Rocksteady in East London’s hipster epicentre of Dalston. All of us are delirious with excitement at the return of live music. It’s Friday night, five days since mingling with strangers became legal again – albeit with strict limitations – and we are at a gig. Let’s pinch ourselves to check it’s real and say it again: WE ARE AT A GIG!

It’s the first time since who knows when; I think my last one was Gwenifer Raymond back in February 2020. She’s certainly the last one I reviewed here – and, as if to accentuate the circularity of things in our brave new almost-post-pandemic world, she’s playing her next one on Wednesday.

It’s much the same story for The Heat Inc., whose last show was 15 months earlier. Because that’s when everyone’s last show in front of a real-life audience was. Things are a little bit different now. I don’t know what The Rocksteady’s capacity normally is but tonight it’s 50. And that includes the promoter, the sound man, the manager, the PR guy, the journalist, photographer and the band themselves.

That leaves room for just 18 paying customers, seated at separated tables, in separate groups. No wonder Jon plugs the band’s new EP, reminding the crowd – “crowd” – that they can buy it at the end of the show, adding: “I need the money.”

So there we are, adopting the new gig etiquette of sitting down in chairs at tables, being brought drinks because we’re not supposed to stand up and go to the bar, and putting on masks to go to the toilet.

It’s not quite the same. Until four figures all in black who have been hovering at the back, explaining that they can’t put their masks on because they have a job to do, amble through the crowd – “crowd” – and on to the stage.

They are Jon Dodd, the Morrison lookalike who sings and dances and thrashes and jumps into the crowd – “crowd” – to engage with the audience, which is probably illegal but very welcome nonetheless; Marco Simoncelli on Stooges-referencing guitar and poses from the Rock Guitarists’ Handbook; Nicolas Rigot on bass guitar, quietly getting on with the job as bass guitarists tend to do; and a hyperactive Maurizio Vitale kicking the living shit out of his drums.

When they start to play we suddenly remember that rock gigs are LOUD, because we had forgotten how loud. Or perhaps forgotten that The Heat Inc. call themselves “the loudest rock’n’roll band in London.” So we move back a bit from our table three feet from the speakers, worried that we might not be able to take the assault on our tender ears, deprived of amplified noise for more than a year.

The band, being a rock band, naturally complain that it’s too quiet, as all rock bands always do. But they didn’t have to sit at a socially distanced seat at a table in front of a speaker, although their press release does state that their new EP – reviewed in March by Louder Than War – “screams out to be played at excessively loud volume in a tiny, sweaty basement with too many bodies and absolutely no air conditioning.”

That’s pretty much exactly what we get. The Heat Inc. sound like a cross between the dirty garage rock of The Stooges and Queens Of The Stone Age, filtered through the moody menace of Mark Lanegan and The Sisters Of Mercy. The fact their only cover is by Suicide – Dream Baby Dream – tells you exactly where they are coming from.

So do their song titles: Draw Blood For Proof, Akasaka Murder Squad, Raptors. Their songs are built around colossal riffs and rhythms of surprising complexity; there are fast catchy ones like Raptors and slower darker melodic ones like Your After Love Song, which has a kind of anthemic slow build that cries out for a bigger stage.

In fact the whole set cries out for a bigger stage: with their exhibitionist tendencies and fondness for matching the music with physical activity far exceeding the recommended hour-a-day to which we have become accustomed, The Heat Inc. are like a stadium band locked in a sweaty nightclub. You imagine that they already are in their minds.

If the drummer has a formative influence on his style, it is probably Animal from The Muppets, such is the fury with which he attacks his kit – which he kicks over at the end, administering the coup de grâce for an evening to remember for several reasons. Most of all, for a reminder that it’s simply great to be back.

All words by Tim Cooper. You can find more of Tim’s writing on Louder Than War at his author’s archive. He is also on Twitter as @TimCooperES with an extensive archive of journalism at Muck Rack.