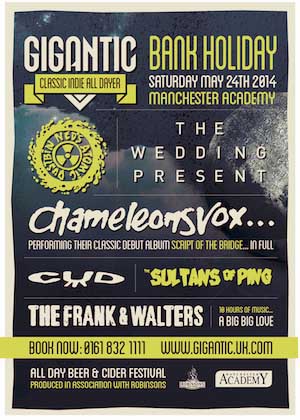 The Gigantic Indie All Dayer – six cult indie bands from the 90’s and 80’s on the same bill. Paul Holloway reviews.

It’s a mini one day festival that the miserable weather can’t ruin as it’s indoors at the Manchester Academy. There’s a fenced off area with a beer tent and 8 hours of live music. What’s better still it’s a gig where the only people who would get asked for ID are the bar staff, you don’t have to worrying about being the oldest swinger in town. We are all reliving our youth with the bands that spoke to us back in the days we were the ones being challenged to prove our age at the bar.

The afternoon starts with two underrated gems from The People’s Republic of Cork (for more information see this Louder Than War  retrospective) – The Frank & Walters followed by The Sultans Of Ping. The organisers tried to incentivise punters to arrive early with a raffle but I’m sure the allure of The Frank & Walters was the factor which filled the hall. Bass playing singer Paul Linehan seems bemused by the raffle and quips a game of bingo would have been more entertaining. The F&Ws look like a wedding band in matching orange shirts, dark ties and braces. Each of the acts today get a similar set time of around an hour giving The Franks an opportunity to showcase some tracks from their largely overlooked but brilliant second album Grand Parade as well as their debut Trains, Boats & Plains; the five year hiatus between the first two albums delivered some wonderfully crafted pop songs but also lost momentum from the success of the single Afterall. 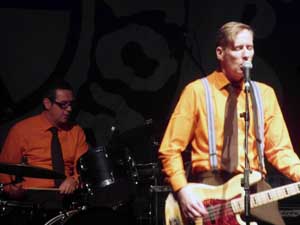 The Franks are the most melodic of the bands today – which raises the question how did they not achieve more chart success. As their set comes towards a close Linehan pays tribute to The Wedding Present and after playing Walter’s Trip he cites them as a major influence before closing with a track from the same EP the typically quirky and catchy Michael. The Gigantic Indie All Dayer has been launched with some panache.

Next up their Cork compatriots, The Sultans of Ping F.C.  With each album they released they shorten their name; the F.C. was dropped after their brilliant debut Casual Sex In The Cineplex by the time their third and final album Good Year For Trouble was released in 1996 they were simply Sultans.  Their mix of indie punk with humorous lyrics about football, relationships, sociology, philosophy and toilet cistern manufacturers (Thanks! Armitage Shanks), was a heady mix that made the Sultans my favourite cult band of the 1990s.  Judging by the number of Sultans t-shirts wore amongst the crowd, second only to the Ned’s – I am not alone. This was their first live show in two years. 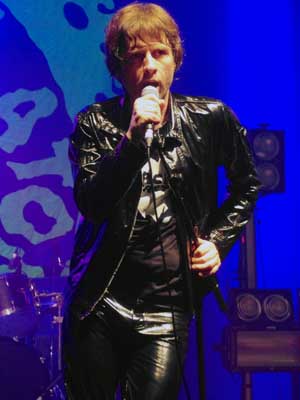 They always had stage presence – guitarist Pat O’Connell and the bass player would be leather clad playing with dark shades, poker faced with big hair, standing like statues either side of Niall O’Flaherty, while he entertained.  Not much has changed – the hair isn’t as big and only Niall is wearing shades as they take to the stage – but the rest of the formula is the same. Niall’s stage persona is a joy to watch, half Jagger half Lee Evans. He squeezed into a very tight PVC leather suit, in which he gyrates about – the Sultans never did subtle.

“Sorry I’ve got a stain” Niall quips as he rubs the crouch of his leather pants “I used to have somebody to do this for me back in the day”.   The mosh pit is a jumping singalong with the majority of the set coming from Casual Sex In The Cineplex. Each song is announced in time honoured Sultans fashion, “We’re gonna do this one for you now…” One curve ball is the ultra sleazy Ladybug Boy a b-side from their 2007 single Girlwatching only available as a import from Sweden, otherwise it’s wall to wall anthems – concluding with Where’s Me Jumper of course.

The afternoon moves on at a pace with Cud.  Frontman Carl Puttnam looks like he is taken a wager from the Sultans as to who can wear the tightest trousers. In those tightly packed tartan pants with his strawberry blonde handlebar moustache; he looks a bit like Keith Lemon. But there is nothing comical about his vocal performance, he thunders through crowd pleasers including Rich and Strange, Push And Shove and Robinson Crusoe – he still has a fantastic voice. 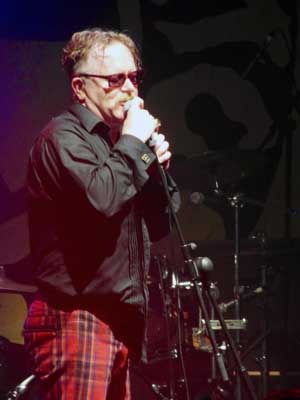 One of two bands from Leeds on the bill, Cud play Manchester not so much a tribute to today’s host city more a plea to be included in the plaudits that were heaped on the music scene’s cultural epicentre; “Where would we be now? If we came from Manchester town?”

The only Manchester band playing today were also the final act to be added to the Gigantic line-up.  A secret special guest was advertised – who could it be Carter USM or The Wonder Stuff are the two acts that sprung to mind based on the rest of the bill. Therefore, Chameleons Vox were a bit of a surprise when announced.  They performed their 1983 debut album Script of the Bridg’ in order as track listed on the record.  The Chamelons (as they were back then) have always enjoyed a solid following here in Manchester but given the album they are playing today was released the best part of a decade before most of the other bands had their heyday, seeing them live would be a new experience for many here, me included.

I was impressed by the moody soundscapes that Chameleons Vox conjured up. Script of the Bridge is in places a very dark record but there is no doubt it is an unappreciated post-punk treasure.  Mark Burgess dedicated A Person Isn’t Safe Anywhere These Days to murdered teenage Sophie Lancaster, whose life was brutally taken just because she looked different. 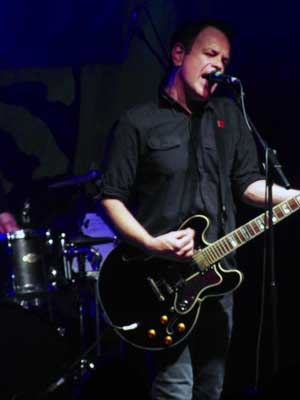 The Wedding Present are the penultimate band to take to the stage.  They are the only band who bring their own backdrop to cover, (or attempt to cover) the gigantic Ned’s logo behind the stage.  A flag with the Valentina album cover is attached to the top of the rigging but it is totally dwarfed by Ned’s enormous nuclear emblem, everyone thinks it looks daft but then who is bothered, we are here for the tunes. I  had no idea that the front man of the Leeds based outfit, David Gedge was originally from Middleton, Manchester; where he went to school with Mark Burgess, he posted a pic of the two backstage on twitter.

Gedge is the songwriter and only ever present in the 30 years the Wedding Present have been going strong and they have the widest back catalogue of the bands here today to choose from; with 8 studio albums, 9 if you count Hit Parade a compilation of the singles they released every month in 1992.  But tonight they go right back to the beginning and take to the stage with Go Out And Get ‘Em Boy their first single from 1985. There are plenty of jangly guitar indie pop classics on offer including Everyone Thinks He Looks Daft and My Favourite Dress from the George Best album; Suck and Corduroy from Seamonsters and a trio of tracks from Bizarro to close the set with Granadaland, Bewitched and the majestic Brassneck.  Only one complaint; and I know I’m not alone from conversations at the bar, we would love to have heard Kennedy but then that’s a sign of a great band when they can afford to leave out a classic from their set. 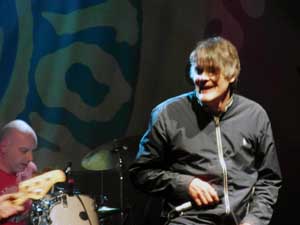 So it’s now up to Ned’s Atomic Dustbin to bring the curtain down on proceedings. The years seem to have been kind to singer Jon Penny, who is still only 45. Back in a tracksuit with his trademark floppy hair, mischievous grin and well chiseled chin, he hasn’t lost any of his bounce as Ned’s put in the most energetic set of the day.

The mosh pit is a frenzy of frenetic pogoing but the mass crowd surfing and stage diving you used to expect from Ned’s fans isn’t there, apart from a few determined souls. Maybe Ned’s fans have mellowed just a little over the years or maybe it’s six gigs back to back that has caught up with the audience. It’s a bit of a two edged sword topping the bill – the crowd has started to thin out a little as indie fans rush back to pay babysitters or call it a day after 8 hours of music (and often some serious drinking), but that means there is more room to dance for those of us still here. The upside is the Ned’s get to do an encore which other acts couldn’t due to the schedule’s tight turn around times. They reemerge to play Kill Your Television and the Academy goes wild.

It’s been a thoroughly enjoyable day, only complaint is the size of the queues for food and in the real ale beer tents. There are plans for another Gigantic Indie All Dayer in 2015. Bring it on – who would you like to see on the bill?

Bands mentioned in this review can be found on the following pages – The Frank & Walters, The Sultans of Ping, Cud, Chameleons Vox, The Wedding Present, Ned’s Atomic Dustbin

Words and photos by Paul Holloway who presents ‘Livin For The Weekend’ on Stockport’s Pure 107.8FM every Saturday morning www.pureradio.org.uk